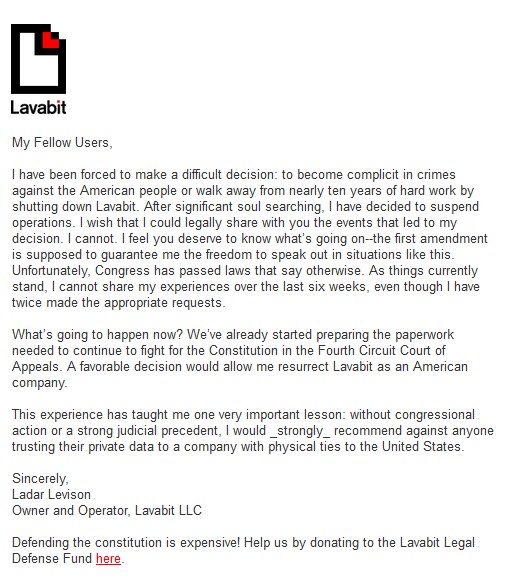 The long struggle against censorship in the 18th century at the time of oppressive kings in Europe involved the hand-copying and circulation of unpublished anonymous manuscripts. Sometimes dangerous or proscribed books were printed in places beyond the reach of the French kings, in Amsterdam or Geneva.

The struggle against censorship was not won with the almost miraculous First Amendment to the US constitution. The amendment, which forbids the government to establish an official religion and prescribes freedom of speech, the press, and assembly only slowly over the subsequent two centuries actually came to mean in practice some of what the words seem to imply.

On Thursday, Lavar Levison, head of the anonymous email service Lavabits, closed his company down after 10 years rather than submit to an FBI demand that he turn over customer passwords.

“I wish that I could legally share with you the events that led to my decision. I cannot….the First Amendment is supposed to guarantee me the freedom to speak out in situations like this. Unfortunately, Congress has passed laws that say otherwise.” Levison concludes: “This experience has taught me one very important lesson: Without Congressional action or a strong judicial precedent, I would strongly recommend against anyone trusting their private data to a company with physical ties to the United States.”

Just as Voltaire had to flee to exile from the French king’s arbitrary order of imprisonment without trial in the Bastille (first to Great Britain and then later to Amsterdam), so any American seeking privacy from the prying eyes of the Federal government must now try to find an email provider abroad that would resist the pressure of the American authorities. While it is legitimate for the police to gain access to someone’s records, such as emails, where there is evidence that the person committed a crime, it isn’t legitimate for the government to go on a fishing expedition through a person’s papers and effects to get pointers on how to arrest that person.

Intensive government surveillance of whom all citizens call, from where and for how long, isn’t warranted because at the beginning the police have no reason to suspect a crime. It seems increasingly clear that this information is being shared with local police in hopes of making a minor pot bust, as a form of harassment. There are disturbing indications, moreover, that the government is lying when it says it is not collecting the substance of emails or phone calls.

But not only is the government snooping into our private business, it is trying to censor what we read. Government employees have been forbidden to read the Wikileaks diplomatic cables. As a result, web sites that republish or discuss them, such as Tomdispatch.com, have been blocked on government servers.

But think about the prohibition. The Supreme Court found that once the Pentagon Papers were leaked, the New York Times could legally publish them. It seemed to have a doctrine that the government can try to cover things up with ‘classification’ schemes, but if it fails, then anyone can read the leaked documents.

But the US government currently disputes the Supreme Court decision, and continues to hold that it is a crime so much as to read the Wikileaks cables. That is, if the cables were reprinted in a book and the analyst were known to be reading that book, it could lead to the person’s firing.

So Levison has been forbidden to tell anyone about what information the government requested from him. His speech is not free.

Edward Snowden is in exile in Russia because the government, outrageously, charged him with espionage for leaking the existence of secret NSA programs that spy on the American people without a warrant.

Reading books is a crime

Next we’ll have to publish our books and blogs anonymously in Amsterdam for fear of arbitrary arrest.