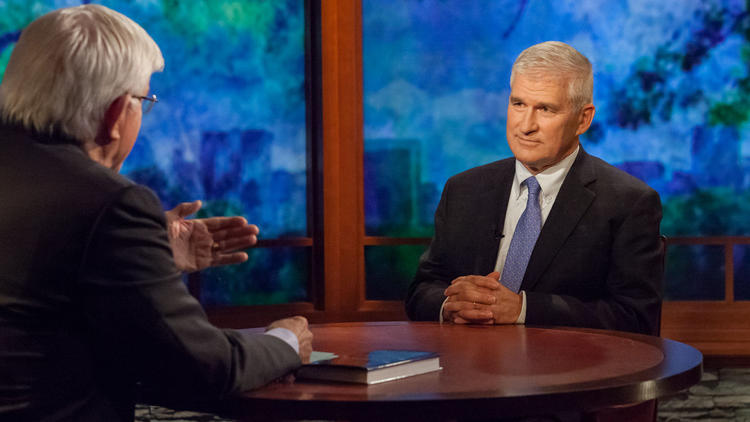 Bill Moyers is away this week and I am pleased to be sitting in for him. Our subject is Syria.

What began there two and a half years ago as part of the Arab Spring has turned into an all-out civil war. Now has come the shocking evidence of poison gas attacks. A fatal escalation that has led President Obama to ask Congress to authorize the limited use of military force. And if we take action, where and when does it stop?

Historian and analyst Andrew Bacevich is here asking those questions. A graduate of West Point and Vietnam veteran, he served in the military for 23 years before becoming a professor at Boston University. His books include The Limits of Power and Washington Rules. His latest, Breach of Trust.

ANDREW BACEVICH: Thank you very much.

PHIL DONAHUE: Well, I’m pleased to have this chance to chat with you for a lot of reasons. One, I don’t know who else has more cred than you.

What would a 23-year graduate of West Point offer us now regarding the dilemma in which Obama finds himself, regarding Syria?

ANDREW BACEVICH: Well, I mean, if I could have five minutes of the president’s time, I’d say, “Mr. President, the issue really is not Syria. I mean, you’re being told that it’s Syria. You’re being told you have to do something about Syria, that you have to make a decision about Syria. That somehow your credibility is on the line.”

But I’d say, “Mr. President, that’s not true. The issue really here is whether or not an effort over the course of several decades, dating back to the promulgation of the Carter Doctrine in 1980, an effort that extends over several decades to employ American power, military power, overt, covert military power exercise through proxies, an effort to use military power to somehow stabilize or fix or liberate or transform the greater Middle East hasn’t worked.

“And if you think back to 1980, and just sort of tick off the number of military enterprises that we have been engaged in that part of the world, large and small, you know, Beirut, Afghanistan, Iraq, Yemen, Somalia, and on and on, and ask yourself, ‘What have we got done? What have we achieved? Is the region becoming more stable? Is it becoming more Democratic? Are we enhancing America’s standing in the eyes of the people of the Islamic world?’

“Maybe it’s fundamentally misguided. Maybe the questions are not tactical and operational, but strategic and political.” You know, I have to say, I’m just struck by the fact that Secretary of State Kerry has become the leading proponent for war. It’s our secretary of state’s job apparently–

ANDREW BACEVICH: Well, that’s why it’s doubly ironic. ‘Cause the Secretary of State is the war promoter. And that our secretary of state happens to be a guy who came into politics basically advertising himself as the guy who because of his–

ANDREW BACEVICH: –Vietnam experiences, understands war, understands the lessons of Vietnam, and is therefore going to prevent us from doing dumb things. On the contrary, he’s the lead cheerleader to go through another dumb thing.

PHIL DONAHUE: President Obama would say to you, “These are children being grossly and painfully killed.”

PHIL DONAHUE: “How can you watch these videos with the foam coming out of the nostrils. And we’ve got to do something.”

I mean, just weeks earlier, the Egyptian Army killed many hundreds of innocent Egyptians. And we sort of shook our finger at Egypt a little bit, but didn’t do anything. So why act in Syria? Why not act in Egypt? I think that that needs to be sort of, that needs to be clarified.

I mean, a little bit of creative statesmanship it seems to me might say that there are other things we could do that would actually benefit the people of Syria, who are suffering greatly, who are fleeing their country in the hundreds of thousands. Who are living in wretched refugee camps. Why don’t we do something about that? Why wouldn’t that be a better thing to do from a moral perspective than bombing Damascus?”