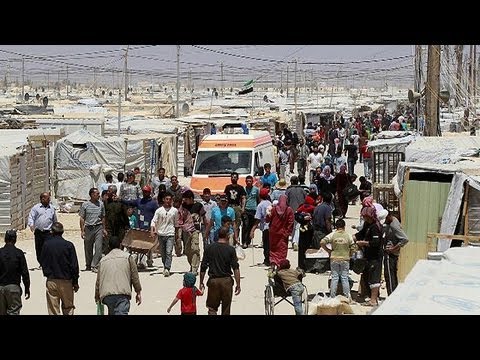 American network & cable television has been focused his week on US-Russian diplomacy with relatively little coverage (aside from Ben Wedemann on CNN and a handful of others) of what is happening on the ground in Syria. Here are some Syria reports from European and VOA correspondents that illuminate the situation there:

1. Euronews: “Seven million Syrians, or one-third of the population, are either displaced within their own country or are refugees abroad, according to the latest estimates from the United Nations High Commission for Refugees. Of those, two million have fled to neighbouring Iraq, Jordan, Lebanon and Turkey. The biggest burden has fallen on a very weak Lebanese state, where the Syrian war has already provoked considerable internal violence. Some refugees have gone further afield. According to the UN, 4,600 Syrians have reached the Italian coast with around two-thirds arriving in August alone.”

2. Channel4New on last May’s massacre at al-Bayda by Syrian government troops: “Warning – this video contains extremely distressing images. In May this year the Syrian army entered a small town called al-Bayda and massacred at least 169 men, women and children. Channel 4 News met with the survivors.”

3. AFP: “The Palestinian refugee camp of Yarmuk [in Syria] has been the scene of fierce clashes for months between opposition fighters and forces loyal the regime of President Bashar al-Assad. Its residents have been increasingly involved in the Syrian conflict, despite calls from the regime and international organisations for them to remain neutral.”

[Palestinian families in the camp were expelled from their homes in what is now Israel in 1948 and are now stateless, without the rights of citizenship. Their position in Syria is becoming tenuous and as stateless people they cannot return home and have nowhere to flee.]

4. VOA: “Syria’s Kurds are the country’s largest ethnic minority. They are caught in the web of Syria’s civil war, fighting among themselves and also battling Islamist extremists for control of a pocket of the country. Thousands of Kurds have fled Syria, mostly to Lebanon and Iraq. Heather Murdock has more for VOA from the Bekaa Valley in Lebanon, where many Syrian Kurdish refugees have taken shelter.”

5. France24: “The release of a “chilling” UN report brings new developments and frightening statistics in the Syrian conflict. The UN accuses all parties of war crimes : the Syrian government is blamed for the thousands killed in undiscriminate bombings, the Opposition for using torture and extra-judicial killings.”

6. RT: “The Syrian army is battling small groups of rebels who remain in the ancient Christian village of Maaloula. Opposition fighters linked to Al-Qaeda have been in control of the area for almost a week – reportedly looting religious sites and forcing residents to convert to Islam at gunpoint. RT’s Maria Finoshina made it to the village following reports that government troops have re-captured it – but found pockets of resistance remain.”

8. Deutsche Welle: What is is like to be a Syrian asylum-seeker in Europe? “While civil war rages in Syria, about two million people have fled the country in search of safety. Some 17,000 Syrian refugees are currently living in Germany. Many of them fled on their own. Now the first 5,000 to whom the German government has promised temporary protection and asylum are coming to the country.”