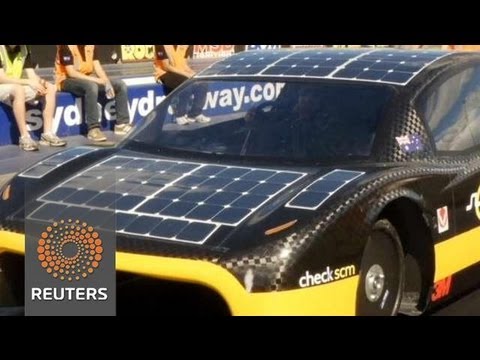 Giles Parkinson writes that this year Sunswift is making a revolutionary and exciting entry in the annual University of New South Wales solar car competition:

This year, they are entering a new class: a two doored vehicle dubbed eVe that looks more like a car than a spaceship, with a sleek carbon-fibre body and sleek body and a sweeping profile… Patterson describes eVe as essentially an electric vehicle, with range extension provided by solar power – or an electric solar hybrid.

According to the UNSW team, the eVe will be able to do around 500kms without the sun, and a further 150kms with the sun. If it had double the amount of batteries (race rules place a strict limit), Patterson reckons it could go from Sydney to Melbourne without a recharge.

I love my Chevy Volt, but I wish it had solar panels on it so that I could park it outside in the sun and recharge it that way, or even recharge while driving in sunlight (I’m putting solar panels on my roof to attain the same effect indirectly when the car is plugged in during the day). The eVe seems to me clearly the future, as solar panels become thinner, smaller, lighter and more efficient.

I’m so impatient for this to be a reality. Transportation petroleum use causes about 22% of man made C02 emissions every year, helping drive global warming.

Solar cars also reduce dependence on petroleum imports from unstable countries. Gasoline prices are at historical highs in part because of Libya, Nigeria, Iraq and Syria; do you really want to be hostage to all that as you just try to get to work? Also, when you buy gas you are often putting money in the hands of regimes like those of Saudi Arabia and Iran, interested in spreading fundamentalist religion and illiberal politics. With solar you could keep that money at home and defund such forces.