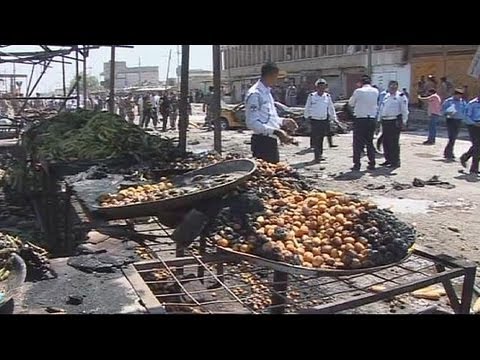 The hawks who are deeply disappointed that diplomacy has likely forestalled a US military intervention in Syria in the foreseeable future often attempt to tug at our heart strings by pointing to the over 100,000 dead and the millions of displaced, implying that the US has a responsibility to intervene to stop the carnage on humanitarian grounds.

If the world were such that the US could in fact do so, perhaps they might have a point. The problem is that social engineering on that scale is currently beyond even a superpower. We need a humanitarian realism to forestall the utopians from taking us into quagmires. There is nothing wrong with doing good where you realistically can. Trying to do good by military means where you cannot can be deadly to both you and the victims.

Syria resembles Iraq in many respects. It is a multicultural country with 60% Sunni Arabs, 10% Kurds, 10-14% Alawite Shiites, 10-14% Christians, and smaller Twelver Shiite, Druze and Ismaili communities. Iraq is a mirror image, with a Shiite majority and a Sunni Arab minority.

Both countries were ruled for decades by the Baath or Resurrection Party, which claimed to be socialist and Arab nationalist. The Baath Party insists on a one-party state. In both countries, an ethnic minority captured the upper echelons of the Baath Party, using its control of the state to reward coreligionists. In Iraq, the Sunni Arabs disproportionately dominated the higher ranks of the Baath Party and officer corps. In particular, the Tikriti clan of Saddam Hussein took the highest posts. In Syria, the Alawite Shiite Arabs were disproportionately represented at the heights of power. In particular, the al-Assad clan took the highest posts.

The Neoconservatives accused Saddam Hussein of having killed hundreds of thousands of Iraqis and maintained that the US had a duty, which trumped international law and the UN Security Council, to invade and overthrow him. While it is true that Saddam Hussein was responsible for a lot of deaths, it wasn’t clear that he was killing any significant number of people 1992-2003. The killings had come as a result of the Iran-Iraq War (1980-1988), the internal war against separatist Kurds (1985-1989), and the repression of a massive Shiite uprising in March-May of 1991. The US was complicit in much of this, having encouraged Iraq and having allied with it during the Iran-Iraq War, which might have ended sooner otherwise. The Reagan administration also used its clout at the UN to protect Iraq from sanctions for using chemical weapons on Iran, which encouraged the regime later to use them on the Kurds. George H. W. Bush called on Iraqis to rise up against Saddam in 1991, and when they did he left them twisting in the wind and allowed the regime to use helicopter gunships against them.

The pretext for the US war on Iraq was its alleged chemical and other weapons programs and stores, which did not exist and which UN inspectors such as Scott Ritter, a former Marine, explicitly said did not exist.

Danielle Pletka, vice president of the American Enterprise Institute, who has never been right about anything (and is now cropping up on corporate television again) wrote on January 15, 2003 in USA Today:

“As war with Iraq nears, the chorus of those claiming Saddam Hussein is contained, the United Nations process is working or the U.S. must address other, more pressing problems, grows louder. Some hate war or mistrust any expression of American power, but by far the largest group of naysayers is well intentioned. Their mantra, if they had one, would be: “Why now?” . . . Why now?”

She says critic bring up al-Qaeda and North Korea as threats. She answers,

“But these are not reasons to defer action. They are reasons for the U.S. to act now and remove Saddam from power. Only then will al-Qaeda’s followers grasp that the U.S. is a power to be reckoned with, committed to destroying its enemies. Only then will North Korea step back and assess the fate of dictators committed to amassing weapons of mass destruction.”

How’s that North Korea deterrence working out for you? And, didn’t the invasion of Iraq reinvigorate al-Qaeda to the point where it came into that country and is still blowing it up and is now ruling some of northern Syria?

Pletka was doubtful that Iraq had really destroyed its chemical and biological weapons and mothballed its nuclear program:

“Since 1991, there have been repeated “full, final and complete” disclosures of Iraqi weapons programs, each of them incomplete.”

The idea that the US could by invading and occupying the country forestall another 300,000 deaths, which is what the Neoconservatives were arguing, was simply incorrect. The US created a power vacuum in Iraq and by playing favorites helped provoke a years-long (perhaps decades-long) guerrilla war. The Sunni Arabs were fired from their jobs, their state-owned factories were abruptly shut down, and they were removed from positions of power and authority in favor of Shiites and Kurds.

Yesterday, on Sunday, car bombs in Hilla, Basra and elsewhere killed 58 people. Hilla is a Shiite city, and some of its notables had had their land to the north taken away from them by Saddam and given to Sunni families. Since 2003 they have been reclaiming it, expelling Sunni farmers who had come to see the land as theirs. Some of what the US used to call the ‘triangle of death’ was produced by this dynamic. Most likely, the al-Qaeda that Danielle Pletka was certain she could frighten out of existence by invading Iraq was behind the bombing in Hilla, in September of 2013. There was no al-Qaeda in Iraq in early 2003.

Euronews reports on the recent wave of violence in Iraq

Since April 1, 4,000 people have died in political violence in Iraq. That is over a decade since the great Neocon Jihad against Saddam. It is not clear that the Syrian death toll at this moment is greater on a monthly basis than the Iraq shaped by the tender ministrations of Washington.

Guerrilla wars are fought in back alleys and inhospitable terrain. The fighters hide, strike, then fade away. The US never was able to defeat them, either the Shiite ones or the Sunni ones, and mostly had no control over what they did. There US was occupying Iraq with 150,000 troops or so in 2006 when a civil war broke out that was killing as many as 2500 noncombatants a month and displacing tens of thousands each month abroad. It was in charge of the security of the country. It had the troops, the tanks, the planes, the electronic surveillance. But it was powerless to stop a civil war from unfolding under its nose. The deaths tapered off by September of 2007 not because of Bush’s troop excalation (‘surge’) but because by that time Shiite militiamen had ethnically cleansed so many Sunnis from their neighborhoods that they would have had to drive for a while to find more Sunnis to kill. Baghdad under the US went from being half Sunni to being 20% Sunni. There were huge American bases in Baghdad during these events, with on-base McDonalds and Burger Kings. They may as well not have existed for all of their ability to stop the carnage.

So the hawks, whether of the manipulative and vicious sort or of the humanitarian sort, who keep squawking that the US needs to do something are beginning with the premise that the US can do something effective. It can’t.

That the Syria situation is so like that in Iraq makes the analogy compelling. I am not saying that all interventions are doomed. Kosovo and Bosnia aren’t paradise, but they turned out just all right. But Syria is not like Kosovo, where you had a compact territory being invaded by another ethnic group. Syria is all mixed up. The tanks are inside the cities. The cities are multi-ethnic for the most part. There is nothing you could bomb without killing the civilians you were hoping to protect (Syria differs in this way also from Libya).

It is human nature to think, when we see an ongoing great slaughter, that something must be done. But because of the ease of availability of high explosives and other weapons and the breakdown of social consensus, there is little the outside world could hope to do. Arming the rebels, as Obama has pledged to do, will not, let us say, reduce the death rate.

It may be a positive that the question is even being broached. Millions were polished off in Congo in the 1990s and it didn’t get mentioned on the evening news in the US. Likewise, the Algerian civil War of the 1990s and early zeroes passed without comment in America.

But if the US couldn’t stop a civil war and a growing guerrilla war in Iraq while actually running the place, it can’t likely do anything about Syria. It is a sad fact of 21st century life.

What the US and its allies can do is improve the conditions of the 2 million Syrians displaced abroad, and try to figure ways of getting food and necessities to internally displaced noncombatants. The US hasn’t been bad on refugee aid, but it can do substantially more, as can Europe and the Arab League. Ignoring the plight of a third of the country (the DPs) while strategizing how to scramble fighter-jets is the opposite of humanitarianism.