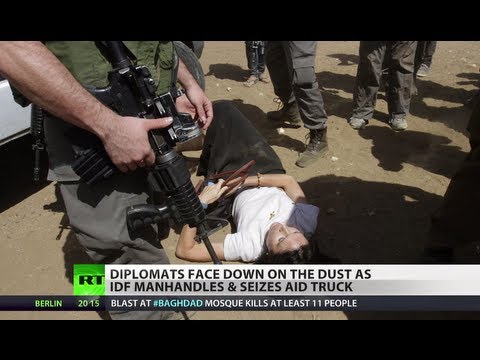 First the Israelis again erased a Palestinian population, ruling that the 120 Bedouin inhabitants of Khirbet Makhul in the Occupied Palestinian West Bank did not have proper “building permits” for the huts in which they lived. These people have lived in Palestine since forever, and they are not in Israel. It is the Israelis who don’t have any permit to be in the West Bank. No international body ever awarded them this Palestinian territory. They just attacked it and conquered it and then started acting like they own it. Then the Russian, Polish, Ukrainian and other European-heritage Israeli troops whose families mostly came in the 1930s and after demolished these “unlicensed” dwellings, leaving the people homeless. The Palestinians refused to take the hint, and they stayed on their land. Then some European diplomats tried to drive out to give them some blankets and food, and Israeli troops stopped them, attacked them with sound grenades, threw some of them to the ground, and confiscated the aid. Among those tossed into the dust was French diplomat Marion Fesneau-Castaing, who has diplomatic immunity.