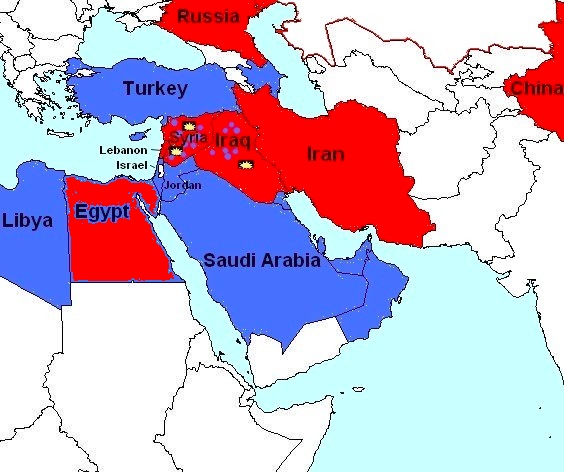 The agreement reached by Russian foreign minister Sergei Lavrov and US Secretary of State John Kerry at Geneva on Saturday regarding the sequester of Syria’s chemical weapons is a little unlikely to shorten the civil war or save many lives in Syria. But it did signal winners and losers in the region and the world.

The big losers were the anti-Baath Syria hawks, who were hoping that a US attack on Syria with cruise missiles would draw the Obama administration inexorably into the conflict on the side of the rebels.

Thus, the agreement deeply disappointed Turkey, Qatar and Saudi Arabia, who wanted a US strike. In Europe, the French government had been hoping the US would go in with French help, allowing Paris to assert itself in its former Syrian colony and to insert itself into the center of world affairs again. The agreement likewise disappointed the hawks in Washington, including Congresswoman Ileana Ros-Lehtinin (R-FL) among the few US federal legislators who wants yet another war.

The winners were the Shanghai Cooperation Council and the BRICS (Brazil, Russia, India, China and South Africa), which overlap somewhat. It is worth noting that Lavrov explicitly thanked this bloc, according to the translation of his news conference on Rossiya 24 TV:

“Today I would like to thank the BRICS countries and the countries of the Shanghai Cooperation Organization, and many other countries for their principled support for the approach to settling the problem of chemical weapons in Syria exclusively by peaceful means. I hope that our meeting today will allow us to start working so these expectations are not dashed.

In conclusion, I will say that the resolution of the problem of chemical weapons in Syria will be a large step towards achieving the long-standing task of creating in the Middle East a zone free of weapons of mass destruction.”

At one point in the press briefing, he was asked if he was surprised that the Chinese had just sent a warship into the Mediterranean off Syria. He said no and referred to the unity of the Shanghai Cooperation Organization, which groups Russia with China and the Central Asian states, and accepts Iran and India as observers. After the collapse of the Warsaw Pact, the SCO is the major international, multilateral organization that tends to oppose US foreign policy.

The agreement for Syria to sign the Chemical Weapons Convention and allow inspections of its chemical weapons averted a unilateral American attack on Damascus, which would have symbolically underlined that Russia is no longer a great power and has no inviolate spheres of influence. In contrast, since Lavrov put forward his plan last Monday to have Syria’s chemical weapons inspected, Russia has been treated as an equal by US diplomats. Russia has gained stature.

Moscow has also protected the Baath regime in Syria from the consequences of an American attack, which would likely have given a big boost in morale to the rebels and likewise would likely have degraded regime air capabilities.

Lavrov revealed how Moscow sees that part of the world:

“Indeed, as John said, we have disagreements, including on Syria. That is to say, we have a common goal – to achieve a peaceful resolution, and for Syria to remain a united, secular state, where all minorities and ethnic and religious groups are safe, with their rights protected. But we disagree on methods. Although here, as regards the issue of Syrian chemical weapons, we have found a common path. And this is how we should proceed on all the other issues too.”

The Putin government is backing the Syrian government in part because it sees that step as a way of protecting Syrian Christians, many of them, like many Russians, Eastern Orthodox. Ironically, at the same time the Russian government sees itself upholding the principle of secular rule against Muslim radical extremists. Syria’s Aleppo is only a 24-hour drive through Turkey from the Caucasus city of Grozny, where Russia faced substantial turmoil in the past two decades.

The Syrian rebels complained bitterly about the accord, and declared they would go on attempting to overthrow the Baath regime.

Turkey’s religious Justice and Development Party was also deeply disappointed, though over 70% of Turks say they don’t want to get involved with Syria.

Saudi Arabia doesn’t typically convey its views in public, but surely Riyadh is little different from Ankara in its cold fury at the turn events have taken. The Saudis wanted the US to help overthrow the government of al-Assad.

The announcement in March of 2003 by the George W. Bush administration that the US would invade and occupy Iraq and Afghanistan regardless of what anyone else in the world thought was an announcement that the US was the sole superpower and the primary Middle East hegemon.

The Kerry-Lavrov agreement may have been the moment when the world returned to a multilateral foreign policy and the US stopped being the sole superpower. We are back to the nineteenth century when there were multiple power centers and each had its sphere of influence.