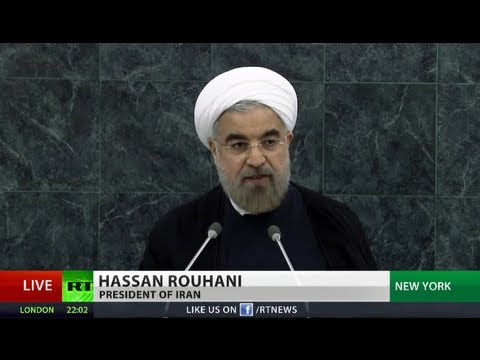 The speech of Iranian President Hassan Rouhani to the UNGA pledged that Iran has no nuclear weapons program and said that Iran never would. The new Iranian president said he was committed to a time-bound set of negotiations over the country’s nuclear enrichment program. His remarks were encouraging, but unspecific about the ways he could provide more transparency to UN inspectors so as to convince his critics in the West. Those specifics may be delivered by Foreign Minister Mohammad Javad Zarif, who may meet with Secretary of State John Kerry on Thursday.

But Rouhani made his real news on Tuesday in an interview with CNN’s Christiane Amanpour, which will be aired on Weds. Amanpour revealed that he acknowledged the Nazi holocaust against the Jews, saying

“”I am not a historian and when it comes to speaking of the dimensions of the Holocaust it is the historians that should reflect . . . But in general I can tell you that any crime that happens in history against humanity, including the crime the Nazis created towards the Jews, is reprehensible and condemnable. . . Whatever criminality they committed against the Jews we condemn … The taking of human life is contemptible. It makes no difference if that life is Jewish life, Christian or Muslim. For us it is the same.”

Rouhani’s remarks won’t entirely mollify his critics, who will point out that he doesn’t seem sure of the “dimensions” of the Nazi slaughter of Jewry. We historians estimate that some 6 million were gassed or killed by other means. But anyway the preoccupation with Iranian views of European crimes against humanity is a little weird. Iran served as a key escape route for European Jews during the 1930s and 1940a. Former President Mohammad Khatami forthrightly admitted and condemned the genocide against European Jews. Foreign Minister Mohammad Javad Zarif, when asked why the Iranian government denies the Holocaust, recently replied that it never had, and only one man had, and he isn’t there any more (a reference to former president Mahmoud Ahmadinejad.)

Holocaust denial in the Middle East is condemnable as it is anywhere, but it results in part from the way in which Israelis deploy the event to justify their usurpation of Palestinian property and ongoing imposition of statelessness on the Palestinians. An immature response to such apologetics is to cast doubt on the premise. Rouhani took a different path. He told Amanpour, “This does not mean that on the other hand you can say ‘Nazis committed crimes against a group, now therefore they must usurp the land of another group and occupy it . . . This too is an act that should be condemned. There should be an evenhanded discussion.”

Rouhani in any case shows more sense in his remarks on these issues than Ahmadinejad ever did.

The full English text can be found here [pdf]