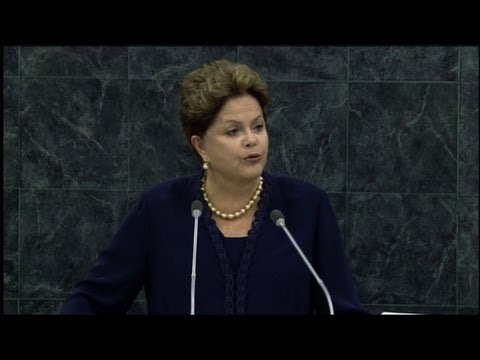 Reuters reports on President Roussef’s speech condemning US spying on her country and on her personally:

In a furious critique that opened the UN's General Assembly meeting Tuesday immediately before President Obama took the podium, Brazil's president Dilma Rousseff blasted U.S. secret surveillance programs for violating her country's national sovereignty, attacking its democracy, and infringing on the human rights of its citizens.

"In the absence of the right to privacy, there can be no true freedom of expression and opinion, and therefore no effective democracy," she declared in her strongest statements yet in the fallout following revelations that the NSA had directly spied on Rousseff. "In the absence of the respect for sovereignty, there is no basis for the relationship among nations."

"Tampering in such a manner in the lives and affairs of other countries is a breach of international law and, as such, it is an affront to the principles that should otherwise govern relations among countries, especially among friendly nations," she charged.

"The right to safety of citizens of one country can never be guaranteed by violating fundamental human rights of citizens of another country," Rousseff continued.

Rousseff scoffed at efforts by the U.S. government to justify broad NSA spying as a vital protection against terrorism: "The arguments that the illegal interception of information and data aims at protecting nations against terrorism cannot be sustained."

She demanded international legal norms for protecting Brazil and other nations against these violations of privacy and reiterated her commitment to protecting domestic communications networks from U.S. interception by storing Brazilian data locally. "The time is ripe to create the conditions to prevent cyberspace from being used as a weapon of war, through espionage, sabotage and attacks against systems and infrastructure of other countries," she said.

Her statements come after she canceled a trip to the U.S. last week over the NSA spying revelations in a rare diplomatic rift between two close allies.

The USG Open Source Center translates two contextual pieces from the Brazilian press on President Rousseff’s cancellation of her planned meeting with President Obama this fall over the NSA spying on her personally. It also appears that as a result of the spying, Brazil will not go forward with purchase of US fighter-planes.

President Rousseff Sought Support Abroad Prior to US Visit Cancelation —

On 23 September Claudio Dantas Sequeira considers in Sao Paulo ISTO E consequences and repercussions of President Dilma Rousseff’s decision to seek international support especially from Russia prior to cancelling her US state visit. (The OSC is processing this item. LAR2013092355696739) Rousseff also checked in with former president Luiz Inacio Lula da Silva and Joao Santana, her election campaign marketing guru. Russia’s foreign minister is reported as having committed to support any Brazilian retaliation on the United States due to electronic media surveillance allegations. When she addresses the UN General Assembly’s opening meeting Rousseff will call for a new Internet governance mechanism designed to prevent invasion of privacy. Rousseff will also underscore the need for the United Nations to play a role in seeking negotiated solutions to any global crisis. The article points out that the surveillance imbroglio will make a purchase of US fighter jets unlikely. Defense Minister Amorim Views Vulnerability to Cyber Attacks —

On 22 September Tereza Cruvinel and Leonardo Cavalcanti interview Defense Minister Celso Amorim for Brasilia Correio Braziliense. Amorim outlines concern with Brazil’s vulnerability to cyber attacks as exposed by recent reports of US electronic surveillance targeting the country, and dependency on foreign technology. The country must focus on updated technological development, he argues. Foreign technology holds Brazil hostage and will continue to do so for some time. The minister also expresses concern with the sluggish procedure related to a fighter jet purchase. Amorim outlines Brazil’s border security efforts and development of cyber defense hand in hand with Argentina.

It is also worth reading the Speech of President Rousseff to the 67th UN General Assembly in 2012, last year: She then slammed Islamophobia, pointed out that Brazil has a stake in peace in Syria given that it has millions of citizens of Syrian descent, and some of them are Muslim. (The number of Muslims in Brazil, pop. 180 million, is unknown, but some sources estimate it as 1 million; these would be mostly Syro-Lebanese in origin). She supported the Palestinians’ right to be recognized as a state by the UN.