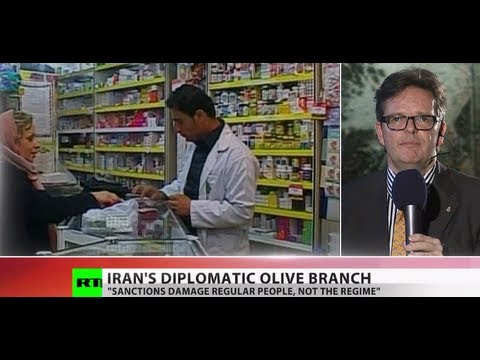 In smug Washington-speak, US ‘sanctions’ on Iran have forced it to the negotiating table, making it possible to ‘stop’ the Iranian ‘nuclear weapons program.’ Even President Obama has started talking this way. They leave out the story of the children who die because they can’t afford medicine.

The US doesn’t just have sanctions on Iran, e.g. refusing to buy pistachios from there. It has gone around the world threatening other countries with Treasury Department third-party sanctions if they buy Iranian petroleum. Those aren’t sanctions, they are a Mafia squeeze play. The Iran sanctions that the US Congress delights in voting for are mostly crafted by the Israel lobbies, so that the US has been enlisted in the conflict between Israel and Iran, as a economic ally of the right wing Likud government.

What most in Washington and Tel Aviv forget, or maybe they just don’t care, is that sanctions are a blunt instrument that have never been found to be effective and mostly just end up hurting the poor and the children, as USC economist Professor Hashem Pesaran argues. Gen. James Mattis of the US Central Command admitted last May that severe sanctions on Iran are not working

Powerful people in the targeted country can always insulate themselves. Iraq was under severe sanctions for a decade, during which Saddam Hussein and the Baath Party, the rulers of Iraq, squirreled away billions of dollars in secret stashes. Saddam would still be in power if only sanctions had been applied to Iraq. But the sanctions destroyed the Iraqi middle classes and weakened civil society and killed off at least 500,000 children. The basket case that is Iraq today was produced in signifificant part by those sanctions.

The current sanctions on Iran do not forestall medicine from being imported there. But they have caused the value of a riyal to plummet, mostly because Iran’s banks have been kicked off SWIFT and other major bank exchanges. When your currency is suddenly worth a third against the dollar from what it had been the previous year, you all of a sudden can’t afford imports. Expensive medicine for e.g. chemotherapy is three times as expensive. Some medical equipment is considered dual use and does fall under sanctions. But hospitals’ ability to buy the equipment has also been harmed. Some equipment and medicine cannot be imported by physicians and pharmacists because they have no way to transfer money abroad, given that Iranian banks have been cut off from the other banks, who are under threat of US Treasury Dept. sanctions.