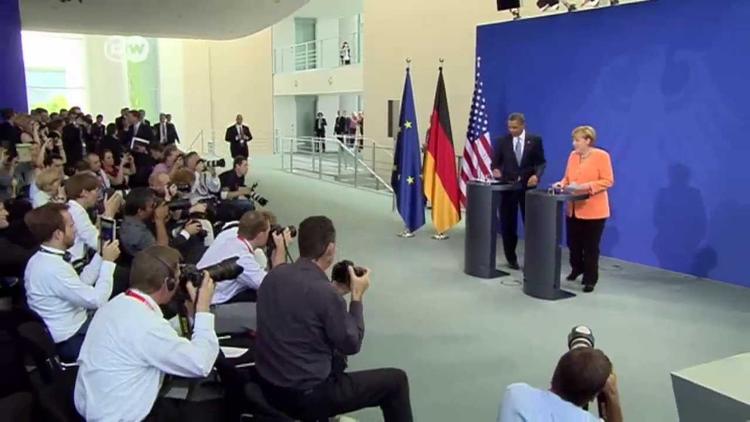 The revelation from the Snowden Papers that the National Security Agency had German Chancellor Angela Merkel’s personal cell phone under surveillance has produced a central fallout. Dueling leaks over the international embarrassment have forced the White House to a key admission: President Barack Obama did not know what the NSA was up to.

Ever since the Snowden revelations of the massive, world-girdling extent of NSA electronic surveillance surfaced, I have been wondering two things: Did they tell Obama about it when they took office in 2009? And, do they have something on Obama?

Outgoing NSA head Keith Alexander or his circle leaked to German tabloid Bild am Sonntag that Alexander had told Obama about the tap on Merkel’s personal phone in 2010 and that Obama asked for more information on Merkel at that time.

That leak forced the White House (and the NSA) to deny the allegation and to see Alexander his leak and raise the ante.

The White House then leaked on Sunday that the Snowden revelations provoked a review of NSA programs and procedures, and the fact that the NSA had Merkel’s and 35 other world leaders’ personal phones under surveillance was revealed to the White House. Someone there then ordered this summer that the personal spying on Merkel and “some” other leaders be halted (the halt wasn’t ordered on all 35?).

In attempting to repair Obama’s reputation with his colleagues at the G-20, however, the White House counter-leakers have made an epochal and very serious revelation: The President wasn’t in the know. (Even in the best case scenario that he was told in 2010, he wasn’t in the know for the first 18 months of his presidency!)

If so, imagine how furious Obama is behind the scenes. It is not his style to act out in public. But the sudden announcements of the retirement of NSA chief Keith Alexander (who apparently should be in jail) and of Director of National Intelligence James Clapper (who certainly should be in jail for lying to Congress) likely signal that Obama demanded they leave.

All of these revelations are being treated as bureaucratic infighting by the inside-the-Beltway courtier press.

It doesn’t seem to occur to anyone to ask what the implications are that an occult intelligence bureaucracy funded at $52 billion a year by your and my tax dollars keeps our elected leaders in the dark about its activities.

Among the founding principles of the United States was “no taxation without representation.” But the NSA appears to be a secret kingdom that appropriates our money with no oversight or accountability. We didn’t elect it, and if it doesn’t let our chosen representatives know what it is up to, then it is taxing us without giving us any representation. It is a tyrant. It is an ominous homunculus within the body politic.

Secrecy is anathema to a democratic republic. If we ever had one, it is long gone. The only real question left is what the unelected fourth branch of government, created inadvertently by Harry Truman, is really up to. It is clearly involved in a great deal of industrial espionage, but how are its discoveries transferred to US corporations? Who do the mostly right wing NSA bureaucrats really report to if not to Obama? And, what are they really doing with our cell phone records, which reveal to whom we speak, how often, and where exactly we are? How are these being data-mined and for what purposes?

How much of our society and politics are shaped by selective leaks about individuals gained from this surveillance? Did the 2008 Wall Street Crash occur in part because the Bush administration had removed pro-regulation New York Governor Elliot Spitzer, using information gathered from his bank accounts, cell phone and personal computer? How many Iraq War critics were, like myself, targeted for surveillance? How many seemingly minor scandals that force decision-makers from office are actually a conspiracy of shadowy intelligence operatives? How many of the vocal defenders of the NSA, or of those politicians too timid to demand reform, fear revelation of personal secrets? Do we have a government or a Mafia extortion racket? These questions may seem outlandish, but they are evidence of the corrosive impact of covert government on a Republic. One can never know what politics is legitimate and what is the result of manipulation. NSA denials that they are using this material gathered on US citizens are not very credible given their officials’ repeated lies and also given their hiding of their activities from the President of the United States.