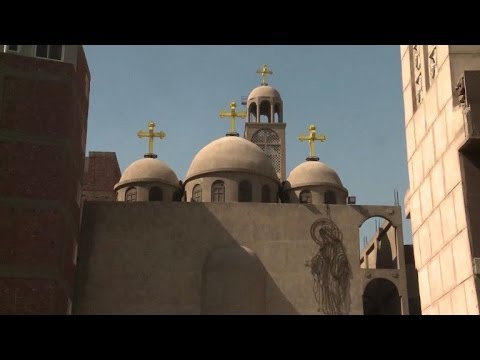 Coptic Christians in Egypt staged a big demonstration on Monday to protest the shooting deaths of four church-goers at the Church of the Virgin in the working class al-Warraq district in Cairo on Sunday. Two of the victims were children. Assailants came in on motorcycles with guns blazing. Many Coptic Christians blamed the deposed Muslim Brotherhood for the attack.

Demonstrators at one point cut off the road along the Nile, the Corniche, a key traffic artery for Cairo.

AFP has a video news report:

Coptic Christians are about 10% of Egypt’s population, something like 8.5 million. They were vocal critics of the government of Muhammad Morsi (June 2012-July 2013), the Muslim Brotherhood leader who won the presidential elections after the fall of Hosni Mubarak but who was deposed by massive protests and a military coup this summer. But then, so were 80% of Egyptians by late spring of this year. After the coup, Gen. Abdel Fattah al-Sisi gathered supporters on a dais. These included Mahmoud Badr, a young spokesman for the Rebellion (Tamarrud) youth movement that mobilized millions against Morsi, the rector of al-Azhar Seminary (the preeminent Sunni Muslim religious authority), and Coptic Pope Tawadrus II.

The Muslim Brotherhood (founded in 1928 and supported at the moment by perhaps 15% of Egyptians) was furious at the pope’s acquiescence in the coup, but hasn’t similarly attacked al-Azhar seminary. Subsequently, Brotherhood members staged huge sit-ins outside the Rabia al-Adawiyya mosque in Cairo’s Nasr City and in Giza. They were brutally cleared in mid-August, with hundreds killed (including some police and military). Some 2000 Muslim Brotherhood leaders were arrested. In the aftermath, Amnesty International reports,

“More than 200 Christian-owned properties were attacked and 43 churches were seriously damaged across the country in the aftermath of events on 14 August.

One Coptic Christian from the governorate of Fayoum described his dismay at the violence: “Why is it when there is a problem, Christians always pay the price? What do we have to do with the events in Cairo to be punished like this?”

Copts called for the resignation of the transitional government of Prime Minister Hazem Biblawi and especially of his Interior Minister over their inability to keep Egypt’s Christians safe. PM Biblawi for his part roundly condemned the violence against Copts (he is a liberal economist from the American University in Cairo’s faculty).

Most Christians blamed the Muslim Brotherhood for the shootings, though to be fair there are other militant Muslim fundamentalist movements in Egypt that might have been behind them (the Brotherhood leadership turned away from violence in the 1970s, though obviously that commitment broke down after August 14). Moreover, with so much of the Brotherhood leadership in prison, mainly for thought crimes, discipline could have easily broken down among the rank and file.

Coptic intellectuals argue that violent Muslim fundamentalists are attacking Egypt’s Christians in hopes of fomenting Muslim-Christian hatred and so of dividing the coalition that overthrew Muhammad Morsi (that coalition was overwhelmingly Muslim, many of them observant, who just did not like what they saw as the grasping and sectarian character of Muslim Brotherhood rule).

Although Christians in Egypt often face discrimination, they are a substantial and demographically growing population with many resources. If Egypt can ever establish a parliamentary democracy, they would certainly emerge as an important swing vote and their social and political power would increase.