Since many mainstream media outlets in the US are burying the dramatic climate change stories from all around the world, either by not reporting them or by reporting incidents with no context, it is important for the progressive alternative press to keep this subject in the public eye.

1. Many observers believe climate change is behind the early start of the bushfire season in Australia’s New South Wales and its many conflagrations (there are 80 fires as I speak and hundreds of homes have been lost). This, at a time when the incoming conservative government plans to abolish the carbon tax and scale back government commitment to green energy.

Aljazeera International reports on the unprecedented threat of the fires to homes in New South Wales:

2. Rising temperatures and other effects of climate change are expected to take 10 percent off the Egyptian gross domestic product by 2050. Agriculture will be hurt, as will tourism. Egypt is also especially vulnerable to rising seas since the Nile Delta is barely above sea level.

3. A new scientific study says that climate change will have a major impact on the oceans over the next decades. It warns:”by the year 2100, about 98 percent of the oceans will be affected by acidification, warming temperatures, low oxygen or lack of biological productivity.”

4. North American forests will face an increased negative impact from insect infestations and disease as the world warms over the next century.

5. Lake Superior of the Great Lakes is warming faster than the other great lakes. Warming means that the Lakes have an ice cover less of the year. The ice sheets reflect more sunlight back into space, so their decline contributes further to warming. Fish species are also being displaced.

6. Climate change will provoke more droughts and changing rainfall patterns in coming years and likely will deprive a billion human beings of sufficient water, according to German scientists. 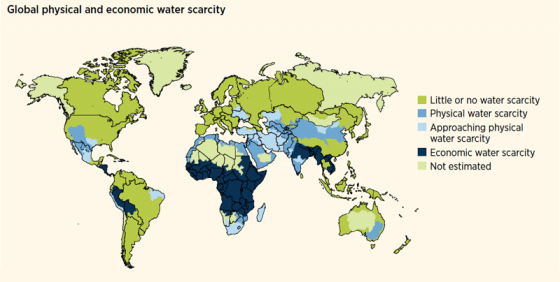 7. Climate change will cause more mercury to be concentrated in fish. Mercury is a nerve poison and causes madness in human beings along with other negative health effects Much of the mercury in our environment comes from burning coal or from using it in industrial processes and then dumping it in waterways.

8. Climate change threatens the agricultural productivity of Nigeria and 10 other West African countries. The International Food Policy Research Institute (IFPRI) writes, “Maize, millet, rice, and sorghum are the major cereal crops in the region, yet yields from these crops are very low compared to the world average and even other regions in Africa. Impacts from a changing climate will challenge production systems already under pressure to produce more to feed a growing population. Existing farming systems, including crops and livestock, are adapted to today’s agro-ecosystems in the region, but climate change will alter those systems in uncertain ways, affecting livelihoods, especially those of poor farmers…”

9. Rising temperatures and changing rainfall patterns will threaten an additional 50 million people in Asia with hunger over the next ten years. U.N. Food and Agriculture Organization (FAO) estimates that crop yields could be off as much as ten percent in Asia in the coming ten years because of climate change.

10. In contrast, India is threatened with longer and fiercer summer-fall monsoons and thus with flooding and crop damage.