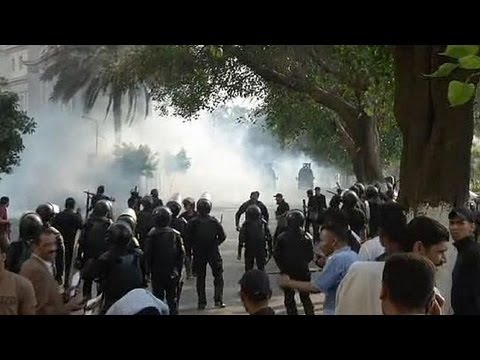 Sunday was another bloody day in the Middle East. In Egypt, the establishment commemorated the success of the Egyptian army 40 years ago in crossing the Suez Canal and taking back most of the Sinai Peninsula, Egyptian territory occupied by Israel in 1967. But the commemorations, which were lively and joyous in Tahrir Square and other sanctioned demonstrations, were marred by smaller counter-demonstrations (still often in the thousands) by the Muslim Brotherhood against the army, complaining about the July 3 military coup that removed elected president Muhammad Morsi from power. The military effectively strangled these protests, sometimes with excessive use of force. The Brotherhood cadres sometimes deployed guns and violence. In some places, such as Ramsis Square, angry anti-Brotherhood crowds tried to attack the Muslim fundamentalists, and the army had to step in to protect the Brotherhood. Over 50 protesters were killed.

Egypt is deeply divided, and can only heal if the military hardliners relent and allow a place for the Muslim Brotherhood in electoral processes. At the moment they seemed determine to ban the organization. Likewise, the remaining Muslim Brotherhood leadership appears so wedded to attempting to restore Morsi that they risk their followers’ lives in fruitless demonstrations that impede any further bargain between the two sides. I can’t imagine protests against the army on October 6 are likely to make the Brotherhood more popular in Egypt.

Then in Iraq, where bombings left dozens of Shiites dead on Saturday, on Sunday the bombings shifted north to the mostly Sunni Arab province of Ninewah. Presumably the Sunni radicals are trying to bait the Shiites into taking them on, and are trying to regiment Sunnis behind their leadership.

Iraq got where it is because its elites and workers refused to compromise or make a grand bargain after the fall of the old regime in 2003. They gradually drove the Sunni Arab population into despair, into supporting or joining the guerrillas. Once a guerrilla insurgency is established and institutionalized, it typically goes on for a decade or more, and only about 20% are militarily defeated.

Egypt would be most unwise to drive the Brotherhood to create an insurgency. In today’s world, weapons and C4 explosives aren’t that hard to get hold of and small cells can disrupt large events. Iraq should stand as an object lesson to other countries in the region as to what can happen if divisions are allowed to fester.

No one thinks it can happen to them. As an Algerian, UN special envoy Lakhdar Brahimi, tried to warn the Iraqi elite in late spring of 2004 that you can fall into a civil war without meaning to, piecemeal. The elite was furious with him for comparing Iraq to divided and violent Algeria. By now Iraq has surely outstripped the violence that beset Algeria in the 1990s. Brahimi is now trying to warn the Syrians that yes, it can get worse.