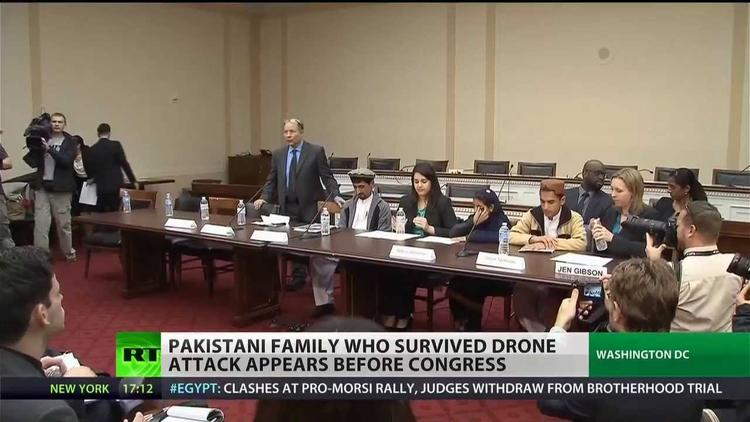 Congressman Alan Grayson held a hearing on the Hill on Tuesday on civilian deaths in US drone strikes. A Pakistani family, the Ur Rahmans, testified on the death by drone of their grandmother while she was tending her garden. Nine-year-old Nabila Ur Rahman was injured in the strike that killed he grandmother. It was a moving event, with the translator tearing up. But only 4 congressmen showed up. Presumably they were too busy taking food out of the mouths of poor children to bother.

Although the US government maintains that few civilians have been killed in drone strikes in northern Pakistan, the Pakistani government estimates that US drones have killed 400 to 600 civilian non-combatants. Sometimes the CIA has fired two drones one after another in hopes of killing first responders. While some first responders may be militants, not all are, and this tactic is a war crime.

RT reports on the hearing:

In his recent visit to Washington, Pakistani Prime Minister Nawaz Sharif pressed President Obama to end drone strikes on his country, saying that they violate Pakistani sovereignty. Wikileaks showed that one of his predecessors secretly authorized the strikes, but Sharif said his own government does not condone them and is determined to be transparent.