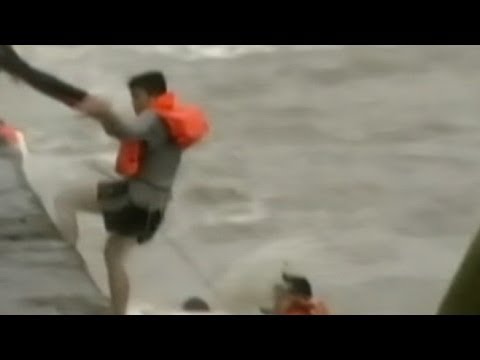 ABC News reports on Super-Typhoon Haiyan, which is now estimated to have killed at least 1200 in the Philippines, and which forced millions from their homes, with winds of 195 miles per hour and gusts of over 200 miles per hour. Other storms have been larger and killed many more (mainly because they stuck around longer and caused floods) but we don’t have evidence of others being this deadly with regard to the intensity of the winds. Merriam-Webster gives “deadly” as “causing or able to cause death.” This storm was the ablest of all in that respect.

Given that some waters of the Pacific Ocean have warmed 15 times faster in the past 60 years than in the previous 10,000, as a result of human carbon dioxide and methane pollution, a climate has been created in which stronger and stronger typhoons can be expected.

AP interviews “Hugh Willoughby, professor of meteorology at Florida International University,” who “says Typhoon Haiyan, which slammed the Philippines, is so powerful that instruments can’t measure its force.” Willoughby warns that global climate change, which is heating up the seas and putting more water vapor in the air, will have two results. Typhoons and hurricanes 1) may become a little rarer. But 2) those that arise will be far more intense, with faster wind speeds and more rain. That is, we are making a future with our carbon emissions of serial disasters that are “off the charts” and for which we do not even currently have scales.

Haiyan is like the first of a ferocious new species of carnivore, heralding an onslaught on the human race.