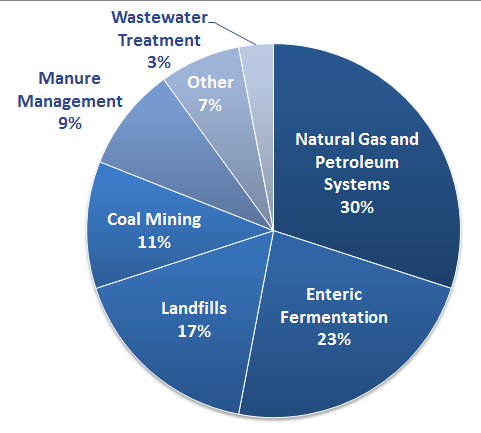 For some oil and gas producing regions, the study found the methane levels not 1.7 times higher but 2.7 times higher. I think in my research I saw that they even found 5 times more in some particular regions.

The amount of the potent greenhouse gas methane the U.S. is emitting may be 50% greater than the amount estimated by government agencies, a group of scientists from Harvard and other leading academic institutions warned in a report published Monday.

"The total U.S. impact on the world's energy budget is different than we thought, and it's worse," Anna Michalak, study co-author and Earth scientist at the Carnegie Institution for Science, told the Associated Press.

According to their research, methane emissions from fossil fuel extraction and refining processes in the South Central United States alone are nearly five times higher than previous estimates.  "It will be important to resolve that discrepancy in order to fully understand the impact of these industries on methane emissions,” stated lead author Scot M. Miller, a doctoral student in Earth and Planetary Sciences through the Harvard Graduate School of Arts and Sciences.

The researchers, who published the study in the Proceedings of the National Academy of Sciences (PNAS), say previous estimates by the U.S. Environmental Protection Agency (EPA) and the international Emissions Database for Global Atmospheric Research (EDGAR) have fallen short because of faulted methodology.

As opposed to calculating estimates from known methane emitting sources, as the EPA and EDGAR have done, the new research analyzes "top down" measurements of methane in the atmosphere, using meteorological data, which was then traced back original sources.

The result paints a far bigger, and more dire, picture of methane in the atmosphere, the researchers say.

The calculations showed that levels of methane coming from the U.S. are up to 1.5 times and 1.7 times higher overall than the amounts previously calculated by the EPA and EDGAR respectively. In addition to the fossil fuel industry, emissions from sources such as cattle farming, landfills, and manure management were also far greater. Methane emissions from livestock operations are up to twice as high as previously thought.

"Successful regulation of greenhouse gas emissions requires knowledge of current methane emission sources," say the report's authors, adding that their findings "cast doubt on the EPA's recent decision to downscale its estimate of national natural gas emissions by 25 to 30 percent."