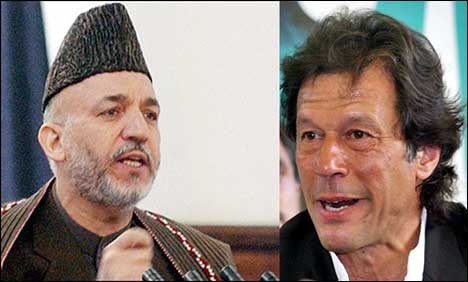 Afghan President Hamid Karzai complained Friday that a US drone strike in Helmand Province targeting a Taliban commander on a motorcycle appears to have gone bad and ended up killing a 2 year old child and wounding two women instead. A second drone strike killed the commander.

Karzai said that he would not sign a Status of Forces Agreement with the US until they stopped military operations that involved invading the homes of Afghans, and hinted that the drone strikes are an issue for him too, since they demonstrate, he said, the the US does not respect the lives of non-combatants.

Karzai’s refusal to sign the SOFA may force the US to begin withdrawals and to make plans, at least, to leave completely by the end of December 2014. The withdrawal of the 75,000 NATO troops in Afghanistan is a big logistical task and can’t be left till the last minute, in case there is no SOFA in the end. If US troops tried to operate in Afghanistan without a bilateral agreement, they could be brought up in Afghan courts on war crimes charges if anything went wrong. No US commander would agree to operate under such a constant threat.

US officials were surprised and dismayed when Karzai, after a long period of negotiations with the US on this issue, abruptly announced that he wouldn’t sign the agreement hammered out between his government and the US allowing American troops to remain in Afghanistan.

The drones are also roiling relations between the US and elements in Pakistan.

The strike follows on one last week on Pakistan proper, killing 6 at a seminary where the Haqqani Network leadership was meeting.

Tehrik-i Insaf or Justice Party, led by Imran Khan, won the provincial government in the northern Khyber-Pukhtunkhwa Province (formerly North-West Frontier Province). Imran and his PTI have led protests against continued US drone strikes in northern Pakistan, blocking NATO supply trucks from bringing goods up from Karachi through the Khyber Pass and thence to troops in Afghanistan.

The NATO truck route is a Federal matter, not a provincial one, and the PTI’s actions are viewed dimly by Pakistan Prime Minister Nawaz Sharif in Islamabad. Sharif has not, however, moved to intervene.