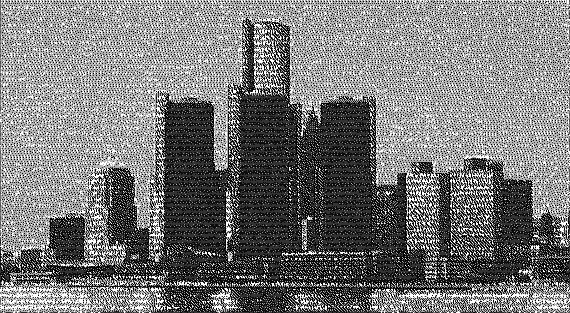 Detroit can go into bankruptcy, a judge has ruled. Likely it means that workers’ pensions will be at least in part stolen from them.

It is a good occasion to reprint this recent piece on post-industrial decline, robots and the future of capital and labor:

The big question is whether Detroit’s bankruptcy and likely further decline is a fluke or whether it tells us something about the dystopia that the United States is becoming. It seems to me that the city’s problems are the difficulties of the country as a whole, especially the issues of deindustrialization, robotification, structural unemployment, the rise of the 1% in gated communities, and the racial divide. The mayor has called on families living in the largely depopulated west of the city to come in toward the center, so that they can be taken care of. It struck me as post-apocalyptic. Sometimes the abandoned neighborhoods accidentally catch fire, and 30 buildings will abruptly go up in smoke.

Detroit had nearly 2 million inhabitants in its heyday, in the 1950s. When I moved to southeast Michigan in 1984, the city still had over a million. I remember that at the time of the 1990 census, its leaders were eager to keep the status of a million-person city, since there were extra Federal monies for an urban area of that size, and they counted absolutely everyone they could find. They just barely pulled it off. But in 2000 the city fell below a million. In 2010 it was 714,000 or so. Google thinks it is now 706,000. There is no reason to believe that it won’t shrink on down to almost nothing.

The foremost historian of modern Detroit, Thomas J. Sugrue, has explained the city’s decline. First of all, Detroit grew from 400,000 to 1.84 million from 1910-1950 primarily because of the auto industry and the other industries that fed it (machine tools, spare parts, services, etc.) From 1950 until now, two big things happened to ruin the city with regard to industry. The first was robotification. The automation of many processes in the factories led to fewer workers being needed, and produced unemployment. (It was a trick industrial capitalism played on the African-Americans who flocked to Detroit in the 1940s to escape being sharecroppers in Georgia and elsewhere in the deep South, that by the time they got settled the jobs were beginning to disappear). Then, the auto industry began locating elsewhere, along with its support industries, to save money on labor or production costs or to escape regulation.

The refusal of the white population to allow African-American immigrants to integrate produced a strong racial divide and guaranteed inadequate housing and schools to the latter. Throughout the late 1950s and the 1960s, you had substantial white flight, of which the emigration from the city after the 1967 riots was a continuation. The white middle and business classes took their wealth with them to the suburbs, and so hurt the city’s tax base. That decrease in income came on top of the migration of factories. The fewer taxes the city brought in, the worse its services became, and the more people fled. The black middle class began departing in the 1980s and now is mostly gone.

Other observers have suggested other concomitants of the decline, like poor city planning or the inability to attract foreign immigrants in sufficient numbers. I suspect that the decline of Detroit as a port is important somehow to the story (only one of the four old locks at Sault St. Marie lets big ships come down to the lower Great Lakes and therefore to Detroit any more. A new, big [pdf] modern lock is being built to accommodate larger vessels, but it will be a decade before it opens. Some observers point out that Detroit would make sense as a Midwest hub port for international shipping containers if its harbor was expanded and linked by rail to the cities of the region, but I suspect the new lock at the Soo is a prerequisite.

After all these decades of dashed hopes, it is hard for me to take too seriously any assertions that the city is about to turn the corner or that some renewal project is about to succeed. At this point it seems to me a question of whether you retain some of the population that will otherwise leave. I find particularly unlikely the idea that urban farming is part of the solution. It sounds cute, but farmers don’t make nearly as much money as urban industrial workers, which is why they mostly went to the cities. You can’t put money into a city that way.

While other cities have avoided Detroit’s extreme fate, I think the nation as a whole faces some of the intractable problems that the city does, and I don’t think we have a solution for them.

Take robots (and I really just mean highly mechanized and computerized production of commodities). More and more factory work is automated, and advances in computer technology could well make it possible to substantially increase productivity. This rise of the robots violates the deal that the capitalists made with American consumers after the great Depression, which is that they would provide people with well-paying jobs and the workers in turn would buy the commodities the factories produced, in a cycle of consumerism. If the goods can be produced without many workers, and if the workers then end up suffering long-term unemployment (as Detroit does), then who will buy the consumer goods? Capitalism can survive one Detroit, but what if we are heading toward having quite a few of them?

It seems to me that we need to abandon capitalism as production becomes detached from human labor. I think all robot labor should be nationalized and put in the public sector, and all citizens should receive a basic stipend from it. Then, if robots make an automobile, the profits will not go solely to a corporation that owns the robots, but rather to all the citizens. It wouldn’t be practical anyway for the robots to be making things for unemployed, penniless humans. Perhaps we need a 21st century version of ‘from all according to their abilities, to all according to their needs.’

Communally-owned mechanized/ computerized forms of production would also help resolve the problem of increasing income inequality in the United States. The top 1% is now taking home 20% of the national income each month, up from 10% a few decades ago. The 1% did a special number on southeast Michigan with its derivatives and unregulated mortgage markets; the 2008 crash hit the region hard, and it had already been being hit hard. The Detroit area is a prime example of the blight that comes from having extreme wealth (Bloomfield Hills, Grosse Pointe) and extreme poverty (most of Detroit) co-existing in an urban metropolitan area. It doesn’t work. The wealthy have no city to play in, and the city does not have the ability to tax or benefit from the local wealthy in the suburbs. These problems are exacerbated by de facto racial segregation, such that African-Americans are many times more likely to be unemployed than are whites, and to live in urban blight rather than in nice suburbs.

The crisis of capitalism is being delayed in part because of the rise of Asia and the emergence of new consumer markets in places with rapidly growing populations. American corporations have relocated to those places with increasing numbers of people and cheap labor, leaving working communities like Detroiters abandoned and idle. US companies are making goods in Vietnam to sell to middle class Chinese and Indians. But the world population will level off in 2050 and probably will decline thereafter. At that point, consumerism will have reached its limits, since there will be fewer consumers every year thereafter. (There is also the problem that classical 1940s and 1950s consumerism is environmentally unsustainable).

With robot labor, cheap wind and solar power, and a shrinking global population, post-2050 human beings could have universally high standards of living. They could put their energies into software creation, biotech, and artistic creativity, which are all sustainable. The stipend generated by robot labor would be a basic income for everyone, but they’d all be free to see if they could generate further income from entrepreneurship or creativity. And that everyone had a basic level of income would ensure that there were buyers for the extra goods or services. This future will depend on something like robot communalism, and an abandonment of racism, so that all members of the commune are equal and integrated into new, sustainable urban spaces.

Insisting on a 19th century political economy like barracuda capitalism in the face of the rise of mechanized smart labor and the decline of human-based industry produces Detroit. Racial segregation and prejudice produces Detroit. Shrinking and starving government and cutting services while forcing workers to work for ever shrinking wages (or even forcing them out of the labor market altogether) produces Detroit. In essence, Detroit is the natural outgrowth of the main principles of today’s Tea Party-dominated Republican Party. It doesn’t work, and isn’t the future.

The future is not Detroit or today’s GOP-dominated state legislature in Lansing. It is Something Else. Michigan’s slow, painful decline is trying to tell us something, that robots, race and unhealthy forms of globalization are death to cities under robber baron rules. We need new rules.