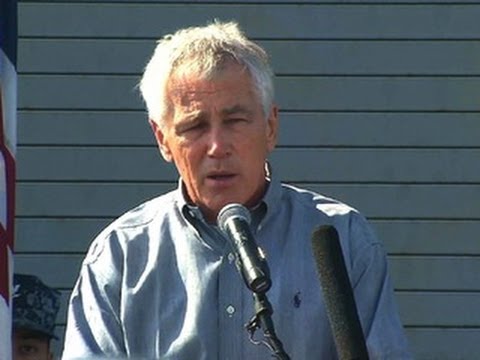 Secretary of Defense Chuck Hagel was in the Gulf on Friday at a conference of defense ministers from the region, including the Gulf Cooperation Council and Iran.

Hagel underlined American commitment to the security of the Arab states on the littoral of the Gulf, including Oman, Saudi Arabia, the United Arab Emirates, Qatar, Bahrain and Kuwait (the six of which make up the Gulf Cooperation Council) and toward which he said the military balance of power had shifted. He said the US had sold $75 billion in sophisticated military equipment to those countries in recent years, more than in the previous 15.

Hagel said that the US had and would keep 35,000 military personnel in the Gulf region, some 10,000 of whom were army soldiers with armor or helicopter gunships. In addition, some 40 US naval vessels patrol the Gulf waters, including an aircraft carrier battle group.

The US commitment to the Gulf is because some 22% of the world’s petroleum is shipped out through its Strait of Hormuz. Qatari and other Liquefied Natural Gas is also shipped out by this route. While the US imports relatively little from this region, its military allies, including Japan and the NATO countries of Europe, heavily depend on it. (But so too does China, which imports from Iran, Saudi Arabia and other Gulf countries and is now the world’s largest oil importer. Beijing is getting a free ride on energy security because the US is paying for the costs of providing it.)

The GCC and other Arab states wanted to hear these reassurances from Hagel, since they’re as nervous about American negotiations with Iran as long-tailed cats in a room full of rocking chairs.

In fact, the idea of the GCC as a military power in the Gulf is darkly humorous. These are countries with small populations, with the exception of Saudi Arabia, which probably has 22 million citizens. Qatar has 250,000. None of them could defend themselves from Iran or Iraq, the other states on the littoral, which are bigger and have proper military establishments, though Iraq’s is fragile from having been recently rebuilt from scratch. While the Saudi military is well equipped, it is small and lacks combat experience or, from all accounts, much practical know-how or esprit de corps. I wouldn’t count on them being able actually to deploy all those shiny weapons W. sold to them.

It has cost the United States $8 trillion to provide military security in the Gulf since 1976. According to Roger Stern, a Princeton economist, the US has spent as much on Gulf security as it spent on the entire Cold War with the Soviet Union! In recent years through 2010 it has been $400 billion a year, though the US withdrawal from Iraq at the end of 2011 and the gradual withdrawal from Afghanistan this year and next presumably means that the figure is substantially reduced. Still, we have bases in Kuwait, Qatar and elsewhere, and a Naval HQ in Bahrain, none of which is cheap. If it were $200 billion a year, that is a fair chunk of the budget deficit the Republican Party keeps complaining about. And if we could get that $8 trillion back, it would pay down half of the national debt.

Some argue that since the US itself imports relatively little petroleum from the Gulf, we’re crazy to pay for policing it. But this argument seems to me not the right one for several reasons. First, petroleum is more or less a single global market (with a spread of say $10 in different spot markets). If the Gulf couldn’t export petroleum, it would put the price up so much that everyone’s economy would collapse, including that of the US. Second, US policy has been to encourage Germany and Japan not to militarize, in return for an American security umbrella. American geopolitical power benefits from having fewer credible rivals, and that is part of what we are paying for. The US has to police the Gulf if Japan is to stay strong in the face of a rising China, and if Germany is not to be Ukrainized.

The right argument is that we shouldn’t be using petroleum and nor should our allies. The supreme tragedy is that the US has bankrupted itself ensuring military security for the oil-producing nations of the Gulf when oil production is destroying the world. We need a crash program to get the world off petroleum, some 70% of which is used to power automobiles. People should be given incentives to move back to cities so they don’t have to commute. Better public transport is needed. Portland is an example of how a concerted push can change the urban transportation situation quickly. 8% of commuters in Portland now get to work on bicycle, 10 times more than any other American city. Portland adopted a global warming action plan in 1993 and has renewed it, and demonstrates what can be accomplished in only 20 years if a city puts its mind to it. And, we should move as quickly as possible to hybrid plugins or where practical electric vehicles (EVs).

Moreover, we should be pressuring our allies in this direction (Germany doesn’t need any encouragement but Japan and others do). Otherwise we are locking the world into as much as a 9 degrees Fahrenheit increase in average surface temperature over the next century, which could well destabilize our climate. And we are paying through the nose for the privilege! It would be like paying hundreds of billions of dollars a year to ensure that people can get access to meth, which then ruins their health.

A tiny fraction of the $8 trillion we spent through 2010 (surely it is up near $10 trillion now) on Gulf security would, if invested in research and development in solar energy and other renewables, and in reformulating our urban transportation systems, save the world. We are told we don’t have money for that effort. But we had plenty of money for aircraft carriers and wars in the Gulf.

Getting some of this security investment back by selling the Gulf nations sophisticated weaponry is a very bad idea. The bigger the conventional arms stockpiles, the greater the likelihood they will be deployed in war. The US is destabilizing the region, not stabilizing it. That would not be necessary if we weren’t dependent on petroleum.

The answer to the security dilemmas of the Oil Gulf is not aircraft carriers, 39 other big naval vessels, over a dozen military bases, and 35,000 troops garrisoned there. It is a crash program to get off petroleum and to get our allies off petroleum. Buy a Chevy, Ford or Toyota plug-in hybrid for your next car. They’re coming down in price, they are dream cars, and there’s a big Federal tax rebate. You’d be saving the world and also helping bring some of our young men and women home from al-Udeid and other bases in the Gulf.

CBS reports on Hagel’s assurances that Iran negotiations will not affect US military posture in the Gulf: