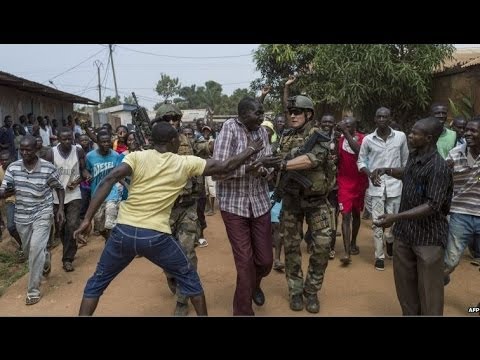 The dramatic events in the Central African Republic no doubt seem distant and complex for a North American audience. CAR is geographically as large as France, but with a population of only 4.5 million (similar to Lebanon or Costa Rica). It consists roughly of 25% Muslim, 25% Protestant Christian, 25% Catholic Christian, and 25% adherents of African faiths.

Last spring, the Seleka coalition of Muslim clans made a coup, which has provoked Christian-Muslim faction-fighting. Christians have organized militias, which they maintain are self-defense forces aimed at expelling Seleka goons from their villages or neighborhoods. In the fighting, some 440,000 people have been displaced.

The anti-Balaka Christian militia massacred 24 Muslims this week. Whereas Selaka is often called extremists in the US press, the Christian militias are almost never called “extremist Christians.” Moreover, Western press reports imply that the massacre is understandable since these Seleka members are connected to high-ranking Seleka coup-makers.

While Western press reports do speak of Christian militia members, on the American side the E-word was little applied. But surely massacring 24 non-combatant people is extreme.