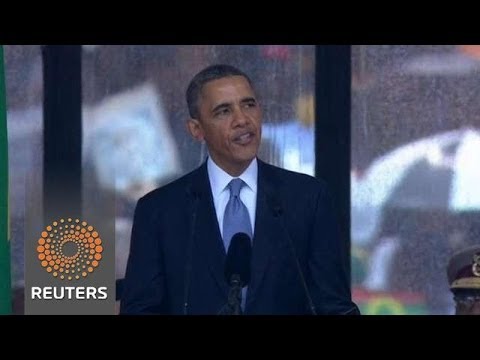 “There are too many of us who happily embrace Madiba’s legacy of racial reconciliation, but passionately resist even modest reforms that would challenge chronic poverty and growing inequality.

There are too many leaders who claim solidarity with Madiba’s struggle for freedom, but do not tolerate dissent from their own people. And there are too many of us who stand on the sidelines, comfortable in complacency or cynicism when our voices must be heard.

I am not an armchair politician who holds the real ones in contempt. Politics is hard. Most of us don’t have the patience or the stamina for it. Hammering out a compromise among persons with strong egos and entrenched ideologies is a talent and a skill that I admire. Those puritans who demand consistency and decry hypocrisy, who scoff at bargaining, may admire their own unsullied characters alone in their rooms, but they will never actually accomplish anything good for people. Barack Obama has the patience of a Job, in the face of an opposition party that has declared itself not a loyal opposition but a deadly enemy.

So it is not lightly or glibly that I use the occasion of Obama’s heartfelt speech to upbraid him. But the contradictions in his sentiments and his actions here are too extreme, too glaring to pass without rebuke.

Obama praised dissent in the service of human rights, but has done everything in his power to suppress dissent. Dissent can come from within the ranks of government employees (indeed, since 3% of the work force in the US is employed by the Federal government if you count the military, it would have to). If Mr. Obama truly valued dissent in the service of human rights, he would persuade his Attorney General to drop charges against Edward Snowden and he would use his presidential pardon to release Chelsea Manning from penitentiary. These two are dissenters, the one in prison and the other facing prosecution if the US could get its hands on him. They saw their government do things that they found ethically repugnant and blatantly unconstitutional, which the government had hidden from the citizens whom it was supposed to be serving. Their revelations of what they knew was the highest form of morality.

Mr. Snowden in particular has revealed a Federal government completely out of control, engaged in warrantless surveillance of millions of American citizens on US soil, in ways that contravene the letter, spirit and intent of the Fourth Amendment to the US Constitution and which courts have found illegal when these practices have been allowed to come before them. The ACLU has shown how dangerous this unfettered surveillance could be to our individual liberties and personal autonomy.

One can only be disappointed at Mr. Obama’s complaisant reaction to these revelations, many of which may well have come as a surprise to him, since apparently the octopus-like secret government that has substituted itself for the elected one doesn’t tell the front men very much about what it is really doing. Obama seems convinced that the records being assiduously compiled on Americans (not to mention millions of innocent French, Brazilians, Germans, Indians and others) will not be misused by government. This conviction is either self-serving or strangely naive, and in any case goes against the entire tradition of American governance. The US government was erected by people who had suffered forms of tyranny pursued by a much less powerful government than we now have, and who were convinced that state officials will often get away with as much as they can get away with.

We already know that warrantless surveillance of individuals has started law enforcement investigating them for, e.g., drug buying. When the investigation threw up actionable evidence, law enforcement prosecuted on the basis of it. The police then lied to the judges and defense attorneys, making up some reason for which they began looking at the alleged perpetrator in the first place, and obscuring that it was unwarranted electronic surveillance that put them on to him or her. Perhaps thousands of such unconstitutional prosecutions have been brought, dishonestly and illegally. If police will lie to the judge’s face to get their conviction, what else will they do? And getting up a political protest involving civil disobedience is as easily monitored as are drug buys.

The kind of information being gathered without a warrant not only by the National Security Administration but by a wide range of law enforcement and intelligence agencies has the potential for making dissent impossible. Most effective protest of the sort Mr. Obama praised in his speech is illegal. Often, the laws themselves are wrong, as with the latticework of Jim Crow legislation that subjected African-Americans or the enactments of the South African parliament in the Apartheid era. Breaking wrong laws is key to much of the social progress the world has made in the past century. Gandhi, whom Obama cited, formulated a policy of nonviolent noncooperation, which involves law-breaking. The government’s aspiration to total information awareness about all human beings will be deadly to conspiring to break the law or carrying it out.

Some may think I am exaggerating the case, but we only have 1% of the Snowden leaks and what we already have makes Orwell’s 1984 look like a lackadaisical libertarian paradise.

A man driven by a desire for social justice, on discovering what the NSA and other agencies have been up to, would have formed an urgent commission to investigate abuses and curb them. Obama instead kidnapped the president of Bolivia looking for Snowden and stiff-armed any talk from people like Sen. Ron Wyden (D-OR) about maybe reforming the practices.

Greatness has escaped Mr. Obama. He seems content to be the community organizer of the Federal government, asking Congress and Federal officials what they think they need and offering to try to get it for them. That isn’t leadership. His response to the NSA leaks was to announce that the country could now have a discussion of the practices, as though the citizenry could discuss matters being actively hidden from them, on which a sitting senator like Wyden is muzzled. Mr. Obama’s chance at greatness is before him. Most of the abuses are in the executive, over which he largely has control. He could initiate major reforms restoring constitutional liberties. If he does not, he is very unfortunately choosing to play P.W. Botha, not Nelson Mandela.