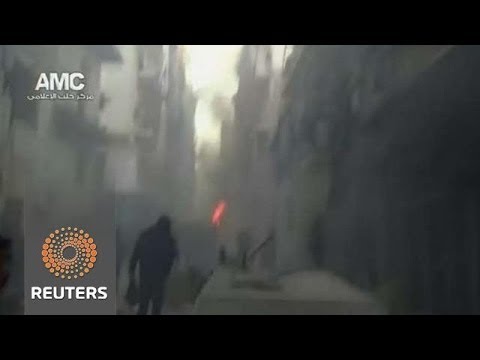 The Lebanese newspaper al-Nahar reports that the Syrian air force bombed Aleppo on Sunday with makeshift barrel bombs, killed at least 36 persons, including 15 children. They targeted neighborhoods controlled by rebels in the country’s largest city, in the north of the country. The Aleppo Information Center made up of activist citizen journalists said that helicopter gunships targeted a number of rebel-held districts in the country’s financial center. They said they used barrel bombs on these civilian neighborhoods, wreaking a great havoc on buildings and set cars aflame. Rebel forces deployed earth moving equipment to clear rubble and look for survivors and the dead. An eye witness remarked,

In October and November, the Baathist regime of President Bashar al-Assad fought a series of battles to restore overland supply routes to Aleppo from the south, defeating the rebels in some villages near the city. It tried and failed to cut the rebels off from resupply from al-Bab. Many analysts feel that the regime will make a major push on Aleppo soon, in an attempt to wrench it decisively from rebel hands. The rebellion would not be worth much if it didn’t have neighborhoods in major urban centers like Aleppo.

The Syrian regime is guilty of war crimes and has unhesitatingly deployed heavy military weaponry and aerial bombings in civilian neighborhoods full of noncombatants.

Some 115,000 Syrians have died in the past 30 months as the attempted revolution became a civil war. About 41,000 of these deaths were non-combatants, including 6000 to 10,000 women. Rebels are responsible for some proportion of those civilian deaths and for the killing of 47,000 Syrian troops and paramilitary. The troops have only managed to polish off 23,000 rebel fighters, because the latter engage in guerrilla tactics and fade away to fight again.