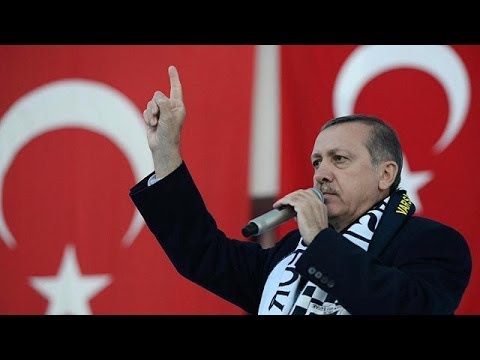 Turkish Prime Minister Tayyip Erdogan is sounding more and more hysterical, and less and less like a statesman as 2013 ends. If you thought Barack Obama had a tough twelve months, you should consider Erdogan. A major corruption scandal has broken out in his government, with 24 persons implicated including the sons of two cabinet ministers and the head of government-owned Halkbank. One allegedly had $4.5 million in shoe boxes.

On Sunday, thousands marched in Istanbul to protest the alleged corruption.

Erdogan responded by purging 70 police officials, including Istanbul’s police chief, who were behind the investigation. Then he hinted broadly that the corruption allegations were groundless and resulted from an attempt by Israel and the United States to frame his party members. He threatened to expel foreign ambassadors from Ankara. Career diplomat, US ambassador Francis Riccardione, whose leaked dispatches from Mubarak’s Egypt show him to be a humane person interested in human rights, must be scratching his head at these wild charges that he is sneaking into AKP homes and planting millions of dollars in shoe boxes.

On Sunday Erdogan said he would “break the hands” of anyone accusing him of corruption, adding that “everyone will know their place.” (These phrases are metaphorical, of course). This kind of paranoid fantasy expressed in public should be a danger signal to observers. Leaders who think and talk that way are the sort of people who have caused the world an enormous amount of trouble. Paranoia is not a mental disease but a symptom of some other underlying condition; a common cause is clinical depression.

Erdogan’s party is facing local elections in the spring, and he is running for president this summer. General elections are scheduled for 2015. After over a decade of dominance, his party may seem vulnerable to its rivals. Erdogan has to be concerned that his own image will be so tarnished by the corruption issue that it could interfere with his winning the presidency. He may have to run against his own party colleague, current president Abdullah Gul, who has in the past year behaved more judiciously than Erdogan.

Erdogan faced a significant youth revolt in June, which he dealt with by deploying water canon and military-strength tear gas and police repression. He appeared to have succeeded in tamping down the demonstrations before they could cascade into something more menacing. But the episode of “Gezi Park” revealed a dark side of Turkish authoritarianism at odds with the democratic facade projected for the sake of joining Europe. The Turkish mass media are so muzzled that they dared not cover the Gezi protests (notoriously, CNN Turk played a documentary on penguins during one of the more dramatic moments of the demonstrations). I was shocked that there was so little press freedom left in Turkey.

Erdogan was among the more successful world politicians of the first decade of the twenty-first century. His party came to power in 2002, crafted so as attract a constituency of committed Muslims but not to trigger the then Draconian laws guaranteeing official secularism. Erdogan had been jailed for reciting a poem in which minarets were equated to Muslim spears. He had seen several attempts to establish a Muslim-based party crash and burn. His Justice and Development Party (AKP) was intended to be “secular” in the sense of rejecting theocracy while arguing for removal of restrictions on public displays of belief and piety on public property (schools, universities, the parliament).

Erdogan and his party went from strength to strength. They grew the economy with wise economic policies and trade expansion. They avoided foreign adventures. They played a responsible role in NATO, stepping up to send troops to Afghanistan and to patrol the coast of Libya. They avoided the social divisions that beset Egypt under Muhammad Morsi and the Muslim Brotherhood in 2012-2013 because they did not push for sharia or the official implementation of Islamic law. Many in the Middle East saw the “Turkish model” as the salvation for societies torn between nationalism and political Islam.

But as Erdogan kept winning elections, he began acting high-handedly. He curbed the power of the secular officer corps. In a way this step was good, but it did have the effect of removing one check on a powerful parliamentary majority. Then his party bruited restrictions on abortion. Then they banned [the sale of alcohol after 10 pm and curbed sidewalk cafes where people sat out late drinking beer.] Then they curbed freedom of assembly by a harsh crackdown on the Gezi Park protesters (and their analogues in Ankara and other cities).

More recently, Erdogan moved against his Muslim ally, Fethullah Gulen, deciding to close the private Muslim prep schools run by the Gulen movement. The Gulen movement has a strong corporate identity and had been an important constituency for the Justice and Development Party. (You could make a loose analogy to the role of the evangelicals in the American Republican Party. Many in the GOP are not evangelicals, but the latter have become important and are responsible for some of they party’s electoral successes.)

I don’t know whether the corruption allegations against high AKP officials are true or not. It wouldn’t be surprising, since human beings are human beings. What is more worrisome is Erdogan’s posture of intolerance toward those raising the issue. In a democracy, discontents with the government have to be available for public debate. It isn’t right to attempt to displace blame onto foreign embassies or to menace critics. It has gotten to the point where Turkey is among the more dangerous countries to practice journalism.

There has been much to admire in Erdogan’s political career– his resiliency, his ability to craft solutions to otherwise intractable problems in Turkish society and politics, his stewardship of the economy, and his care to tamp down conflicts with neighbors (Syria is a recent failure in that regard). The “Turkish model” was appealing because it had at its core an ideal of tolerance for the other, an aspiration of liberty for both the secular and the religious. Erdogan is risking all his large achievements by a defensiveness and paranoia, a discourse and a policy of intolerance. That is a shame not only for Turkey but for other countries in the region such as Tunisia and Yemen, which have a lot riding on the success of that model.