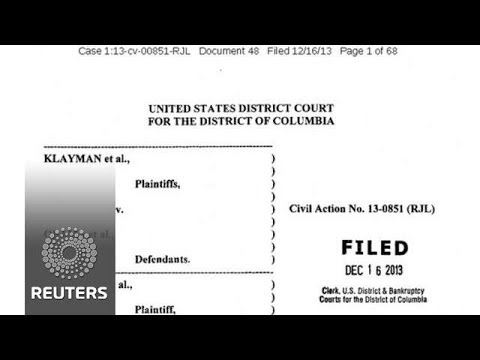 Judge Richard Leon of the United States District Court for the District of Columbia ruled Monday that the bulk collection by the National Security Agency of cell phone data (everyone you called, when you called them and where you were when you called them) of Americans violates the Fourth Amendment to the Constitution and is “Orwellian.” I recently myself said that Some may think I am exaggerating the case, but we only have 1% of the Snowden leaks and what we already have makes Orwell’s 1984 look like a lackadaisical libertarian paradise.

Leon found that the 1979 Supreme Court ruling Smith v. Maryland, which was appealed to by the Department of Justice to justify the practice was far too narrow to support NSA actions. Smith v. Maryland allowed police to collect from telephone companies lists of numbers called without a warrant for a short period of time. Leon pointed out that nowadays cell phone data includes much more than just the number you called. It also includes, for instance, your location when you made the call, functioning in the way GPS does. For the NSA perpetually to collect intrusive data without a warrant on millions of persons not suspected of wrongdoing is a very different proposition than the 1979 case.

He said, “It’s one thing to say that people expect phone companies to occasionally provide information to law enforcement; it is quite another to suggest that our citizens expect all phone companies to operate what is effectively a joint intelligence-gathering operation with the Government.

Crucial to Leon’s ruling was that he recognized the standing of the plaintiffs, Larry Klayman and Charles Strange, to sue to stop the government from monitoring them. Several previous suits, including one by the ACLU and prominent authors, had failed because the plaintiffs could offer no documentary proof beyond suspicion that they were being monitored.

Klayman (of Freedom Watch) and Strange (whose son was a cryptographer killed in Afghanistan) obviously did have standing, however (as any Verizon customer did), since Edward Snowden leaked to the Guardian’s Glenn Greenwald last summer that the NSA regularly demands that US telephone companies turn over all users’ personal information (who they called, when, and where they were). Leon cites Greenwald’s article in recognizing the plaintiffs’ standing, as well as subsequent government confirmations of the information in the leak.

Judge Leon wrote that the Supreme Court’s Clapper decision last spring, which disputed the notion that citizens could be presumed to be under surveillance, was delivered before the Snowden revelations. He said,

“Thus, whereas the plaintiffs in Clapper could only speculate as to whether they would be surveilled at all,

Without Snowden’s leaks, no legal challenge could have been brought to the NSA practices. He released a statement to the New York Times claiming vindication:

“I acted on my belief that the NSA’s mass surveillance programs would not withstand a constitutional challenge, and that the American public deserved a chance to see these issues determined by open courts . . . Today, a secret program authorised by a secret court was, when exposed to the light of day, found to violate Americans’ rights. It is the first of many.”

The NSA and other US security organs have assiduously avoided allowing their procedures to come before courts that might rule on their legality or constitutionality.

The judge was considering whether the NSA surveillance ran up against the 4th Amendment:

“The right of the people to be secure in their persons, houses, papers, and effects, against unreasonable searches and seizures, shall not be violated, and no warrants shall issue, but upon probable cause, supported by oath or affirmation, and particularly describing the place to be searched, and the persons or things to be seized.”

“Because the Government can use daily metadata collection to engage in ‘repetitive, surreptitious surveillance of a citizen’s private goings on,’ the NSA database ‘ implicates the Fourth Amendment each time a government official monitors it.’

“The threshold issue that I must address, then, is whether plaintiffs have a reasonable expectation of privacy that is violated when the Government indiscriminately collects their telephony metadata along with the metadata of hundreds of millions of other citizens without any particularized suspicion of wrongdoing, retains all of that metadata for five years, and then queries, analyzes and investigates that data without prior judicial approval of the investigative targets. If they do– and a Fourth Amendment search has thus occurred– then the next step of the analysis will be to determine whether such a search is ‘reasonable.'”

Leon cited United States v. Jones (2012), in which five justices found that police erred in putting a GPS tracker on a suspect’s automobile and tracking him for a month without a warrant, since that tracking violated his expectation of privacy. The Supreme Court in that ruling decided that there is a difference between short term and long term tracking, with the latter intruding on privacy because it allows a law enforcement to establish a detailed picture of private behavior. That is very different from watching someone drive down a public thoroughfare once or twice.

I made the same argument in this blog posting earlier in December.

Judge Leon found that the NSA when it demands our telephone metadata is conducting a search, and that it is most likely an unreasonable search of our personal effects according to the Fourth Amendment, since there is no specific suspicion of wrongdoing by any individual whose records are demanded.

That’s what I’ve been saying since the Snowden leaks began last June. Judge Leon is My Hero.