Senator Diane Feinstein and Rep. Mike Rogers took to the airwaves on Sunday to warn that Americans are less safe than two years ago and that al-Qaeda is growing and spreading and that the US is menaced by bombs that can’t be detected by metal detectors.

Call me cynical, but those two have been among the biggest detractors of the American citizen’s fourth amendment rights against unreasonable search and seizure of personal effects and papers. I think their attempt to resurrect Usama Bin Laden is out of the National Security Agency internal playbook, which specifically instructs spokesmen to play up the terrorist threat when explaining why they need to know who all 310 million Americans are calling on our phones every day.

Now, obviously there are violent extremists in the world and the US like all other societies is likely to fall victim to further attacks by terrorists. But if they could not inflict significant damage on us with 9/11 (and economically and in every other way except the horrible death toll, they could not), then it is a little unlikely that this kind of threat is existential.

In fact the number of terrorist attacks in the US has vastly declined since the 1970s (as has violent crime over-all), as WaPo’s chart shows:

(The chart shows each attack as a number and does not show fatalities; obviously the Oklahoma City bombing and 9/11 would be prominent in that case. But the fact is that foreign terrorist attacks kill almost no one in America these days. You’re far more likely to fall in your bathtub and die than to face terrorism).

Rogers makes a big deal out of the fighting in northern Syria as a threat to the United States and says “thousands” of “Westerners” have gone to fight there. But Rogers is just obfuscating by mentioning vastly exaggerated statistics.

The number of Americans estimated by the FBI to be fighting in Syria? 24. Two dozen. That’s it.

The Syrian civil war has nothing to do with the US, and is a local struggle rather unlikely to involve hitting America (more especially since, as Rogers carefully avoids mentioning, the US is committed to arming these rebels to fight against al-Assad.)

That’s right. Mike Rogers voted to give arms to the Syrian rebels. And while he may hope they don’t go to the al-Qaeda affiliates (as happened when Ronald Reagan gave $5 billion to the Afghan Mujahidin in the 1980s), he has no guarantee that won’t happen and is willing to take the risk. If Rogers were really, really concerned about the Jabhat al-Nusra, he wouldn’t be risking upping its firepower with Americans’ tax dollars as a justification for monitoring who your 15 year old daughter calls on her cell phone.

Let us say that again. Feinstein and Rogers just came on television to scaremonger the American people with the Syrian jihadis, and both of them voted to give the Syrian rebels millions of dollars in arms.

That’s a pretty good racket. You support the jihadis abroad and then point to jihadis abroad as the reason for which you have to get into the underwear of the American people.

Then they brought up Iraq, which is another local struggle. Dick Cheney repeatedly warned that if the US left Iraq, the terrorists created by the US Occupation (he didn’t put it that way) would follow us home. But it was never very likely an allegation. You could easily get an attack in the US by a disgruntled Sunni Iraqi. But that the Sunni Arabs of Iraq are gunning for the US? No sign of it.

Is there more extremist radicalism in the world than a few years ago?

I’d need to see a quantitative study before I agreed with the proposition. For instance, in 2002-2006 there were a lot of terrorist attacks in Saudi Arabia, but Saudi security managed to tamp them down and you don’t hear about that now. Likewise Algeria lost 200,000 people to a civil war between secularists and fundamentalists in 1992-2005, but is now sullenly calm. There were millions of deaths in central Africa in the 1990s. While the situation isn’t good, there is nothing on that scale now. We are almost certainly looking at a much calmer world in 2013 than we were even 15 years ago.

I’d also say that that isn’t the right question. If the question is, are there more capable people plotting to hit the US mainland, I think it certainly is not true. Al-Qaeda in the Arabian Peninsula seems to have a thing. Core al-Qaeda is devastated. The rest are involved in local struggles.

They even brought up the attack on the Iranian Embassy in Beirut (as a threat to America?) That would have been nice of them if they hadn’t gone on to accuse the Quds Brigade special forces of the Iranian Revolutionary Guards of committing terrorism all over the world. Don’t you think probably that the Sunni group that hit the Iranian Embassy was targeting the IRGC attaches there, who are allied with the Lebanese Shiite group Hizbullah and encouraged it to intervene in Syria?

So Feinstein and Rogers win either way. They can instance Iran as a terrorist threat to the US mainland even though there’s no evidence of that. Then when Sunni enemies of Iran strike the Iranian embassy, that is also portrayed as a threat to the US.

My head is spinning.

Feinstein and Rogers swore to uphold the US constitution, which contains that pesky 4th amendment. They’ve broken that vow. Voters, you know what to do. 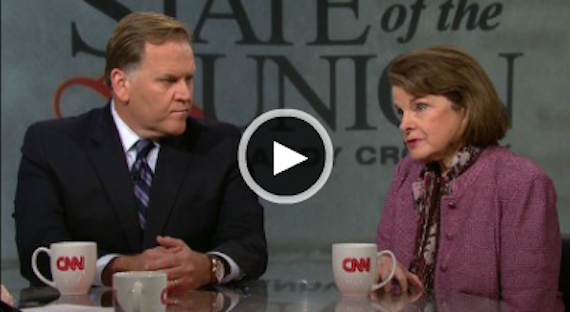