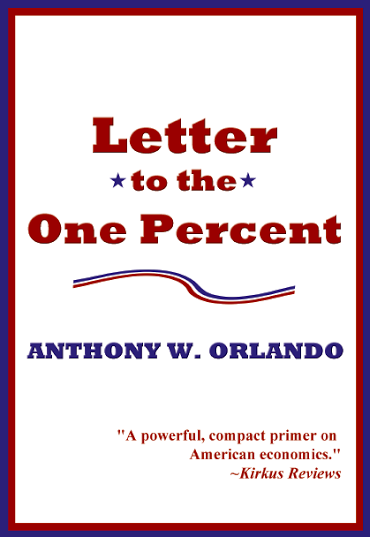 Over the past few years, I have encountered a lot of myths about the so-called “One Percent.” Now that my book Letter to the One Percent has been published, I’d like to share one of the most pernicious myths with you.

We all know that inequality has been rising and the average American household has been suffering. There is a myth that says all this suffering is necessary, that extreme inequality is the by-product of a rapidly growing economy—or worse, that it’s a good thing because it motivates everyone to work hard and climb the long ladder to the One Percent.

Even a brief glance at the historical record reveals just how perverted this hypothesis is.

For one thing, the economy has not been growing rapidly since inequality started climbing. From 1950 to 1980, “real gross domestic product (GDP)”—the output of the economy, adjusted for inflation—grew by 3.8 percent per year. From 1980 to 2010, it grew by 2.7 percent per year. (Since then, it’s been even worse.)

So income inequality hasn’t been “growth-enhancing” at all. In fact, just the opposite.

It’s been widely publicized, for example, that Europe has suffered from higher unemployment than the United States in recent years. Many Americans falsely believe that Europe is more equal than the U.S., but a new data set compiled by the economist James Galbraith and the University of Texas Inequality Project shows inequality between countries and regions across Europe for the first time—and they find that Europe has had higher inequality than us since the 1970s. It’s only within specific countries that inequality is lower than the U.S., and guess what: Those countries tend to have lower unemployment than us.

The reason is quite simple: Those workers are also consumers. When the 99 Percent earn more, they spend more, and the One Percent can produce more and earn more themselves.

“In this sense,” says the wealthy entrepreneur Nick Hanauer, “an ordinary middle-class consumer is far more of a job creator than a capitalist like me. […] Anyone who’s ever run a business knows that hiring more people is a capitalist’s course of last resort, something we do only when increasing customer demand requires it.”

Or, as the late economist Michal Kalecki used to say, “The workers spend what they get and the capitalists get what they spend.” What he meant by that was that the rich can afford to save more of their income—and, indeed, we find that the One Percent continue to save 15 to 25 percent, while the saving rate of the 99 Percent has plummeted close to zero. If too much money goes to the One Percent and not enough to the 99 Percent, the economy will save more and more and spend less and less, until there isn’t enough consumer demand to justify increasing production and investment. Thus, the economy will slow down.

For awhile, the 99 Percent were able to make up for lower incomes by saving less and borrowing more, and for awhile, the economy indulged them with rising asset prices—first in the stock market, then the housing market—and falling interest rates. But this was not sustainable. Eventually, interest rates hit zero, households spent all their savings, incomes couldn’t keep up with debt payments, and asset prices stopped rising. Hence, the Great Recession.

The only real solution is to pay them higher wages.

Here’s how Hanauer frames it: Where would the economy be if that were the case?”

More equal societies also don’t have to waste resources on what the economist Samuel Bowles calls “guard labor,” employing people to keep the lower classes in line. Bowles estimates that one in four Americans are working as guard labor, everything from factory supervisors to police officers.

And our government is more likely to invest in public resources that we all need to be productive—infrastructure, research and development, safety and quality standards—if all Americans feel that they’re “in it together” and not separated by class, and thus they’ll all benefit from the investments.

But the effect that strikes at the heart of the American Dream is the way that inequality makes people in the 99 Percent feel that they’ll never succeed, no matter how hard they work. The theory that extreme inequality is motivational, it turns out, is completely backward.

The divergence between the One Percent and the 99 Percent is clearly at odds with the America we want to live in.

Anthony W. Orlando is a Lecturer in the College of Business and Economics at California State University, Los Angeles. This op-ed is an excerpt from his new book Letter to the One Percent, published this month by Lulu Press, Inc. To learn more, visit www. LetterToTheOnePercent. com.