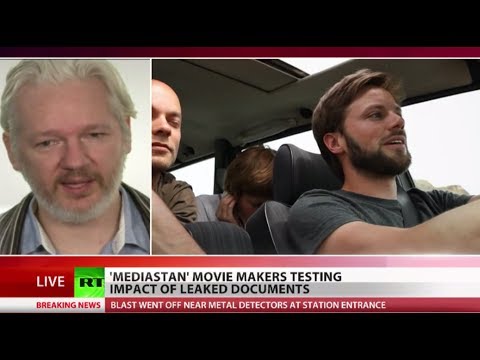 … The coming together of the systems of government and the information apartheid is such that none of us will be able to escape it in just a decade.” . . . “We are all becoming part of this state whether we like it or not . . . Our only hope is to help determine what kind of state we will be a part of.”

Assange called on systems administrators to attempt to foil government spying and to volunteer to penetrate security agencies and out their covert practices.

RT reports on the Wikileaks documentary “Mediastan” & interviews Assange and others ”

In the interview, Assange argues that powerful media are inextricably intertwined with government power, on which they profess to report critically. They are constrained from doing so however, since they require access to power in order to report.

He further outlined a generational struggle now being fought out in cyberspace between the 15-35-year-olds, for whom government intrusion is unacceptable, and the baby boomers and their elders, who for the most part acquiesce in this government power and information-grab.

Assange pulled no punches with regard to Russia Today itself, which, he said, has a power interest and is a projection of Russian government interests. He underlined, however, that it is no different in this regard from other press organs, all of which have power interests of their own, and which engage in self-censorship.

It seems to me that Assange is too grudging in his estimation of The Guardian, whose owners and editors took a lot of risks in opposing the GCHQ and the British government, given that the UK has no bill of rights and they were exposed to possible reprisals from the state. Likewise, while it is true that the New York Times and the Washington Post hold revelations back where they are convinced that they would harm US security in an immediate way, they don’t hold that much back and they have taken risks. The Pentagon Papers were the wikileaks of its day, after all.

As for the informational apartheid (the government has all the info, the people much less and very little on the inner workings of government), it is simply a manifestation of the more general Weberian principle of the iron cage of bureaucracy.

In any case, Assange is correct that there is a huge struggle going on about internet privacy. The governments took advantage of their size and budgets to sweep up all the information they could gather on the internet from people, in a wholly lawless way, which they hid from the people who elected them and who pay their salaries. Yet those same governments are relentless bullies to anyone who captures and reveals their information, even when the public deserves to know that information because it pertains to corruption or criminal activity.

The NSA has essentially turned all American computer hardware and software into spyware. It would be illegal for an individual or a gang to do this. It is illegal when the government does it.

In short, James Clapper and Keith Alexander of the National Security Agency should be in jail for extensively and wantonly violating the US constitution and in Clapper’s case for perjury (he lied to Congress about what the NSA was doing). But those two are not in jail. They’re walking around free as birds and still have their jobs! But Edward Snowden, who simply pointed out that they were operating like a criminal cartel, now Snowden is under indictment.

They can spy on you. You can’t make revelations about them. It is a feudal system of lords and peasants, who are by no means equal under the law.