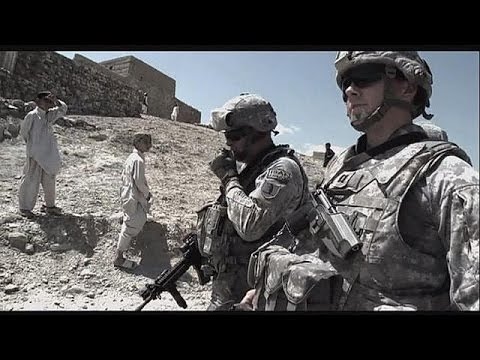 Euronews asks Jeremy Scahill about his new film, “Dirty Wars,” which has been nominated for an Academy Award.

“AMY GOODMAN: Jeremy, this report that just came out from the Bureau of Investigative Journalism that more people have been killed in drone strikes in the six months after President Obama gave his speech—

JEREMY SCAHILL: Right. I mean, this—it’s a lot of smoke and mirrors. I mean, you know, the drone czar, or the assassination czar, John Brennan, who now is the head of the CIA, you know, he worked very hard to create something called the “disposition matrix,” which basically is a program that’s going to be used to determine who should be assassinated, who should we try to abduct, who should we try to render, who should we—which terror suspects should we leave it up to local authorities in Yemen or Pakistan to try to deal with. And basically what Obama and his team have done in his second administration is to create an infrastructure for whoever happens to come into office next, whether they’re a Democrat or Republican, and they have ensured that this policy of pre-emptive war—that’s really what we’re talking about here. It’s—these are pre-emptive, pre-crime strikes, where the idea that we should even view terrorism as a law enforcement activity or terrorism as a crime is completely thrown away by the constitutional lawyer president. And so, what I think one of the major legacies of Obama is going to be on this front is that he has tried to put a stamp of legitimacy on what most countries around the world would claim—you know, plainly view as a global assassination program run by the empire, run by the most powerful nation on Earth.

JUAN GONZÁLEZ: I wanted to ask you about the situation in Afghanistan and the most recent drone strikes there, the impact on the continuing controversy over the status of forces agreement, what’s going to—how the United States will stay in Afghanistan.

JEREMY SCAHILL: Right. I mean, well, as you know, I mean, the U.S. has propped up corrupt warlords, narcotraffickers, gangsters, for the past 12 years in Afghanistan. And, you know, the Taliban still control a large swath of territory, and they will, in perpetuity. And I think—I mean, the question I think a lot of military families in the U.S. and in NATO countries have to ask is sort of what—what was the purpose of the past, you know, 12 years? I think a lot of nations understand the initial incursion into Afghanistan, under the argument that you’re going to dismantle the al-Qaeda network that was responsible for 9/11. But what do you tell the families of—you know, of soldiers that are going to be killed in the year leading up to the so-called withdrawal? I think what we’re going to see in Afghanistan is an asymmetric war that’s going to continue on, where the United States continues to have special operations teams, there’s going to be a very large CIA paramilitary presence, and I think that they’re going to try to present the veneer that it’s an Afghanization of the occupation, but in reality the U.S. strike forces will not be far away.

There was this recent drone strike in Pakistan on the eve of negotiations between Tehreek-e-Taliban, the Pakistani Taliban, and the Pakistani government, and the U.S. killed the leader of the Pakistani Taliban. And it enraged—I was just speaking to a Pakistani diplomat in London. I mean, they believe that the United States intentionally did that to undermine any kind of a negotiated solution with the Taliban. And it’s counterproductive even to U.S. interests. Even if you take the most conventional interpretation of what American national interests are, to have that kind of instability in that region, especially when Pakistan is a nuclear power, is antithetical to the idea that this is a national security policy. I mean, the only way that this is resolved is by negotiating with the Taliban. And the U.S. seems to be giving—paying lip service to that, while then bumping off the people that they’re supposed to be negotiating with.

The last thing I’ll say about this, when I met with Mullah Zaeef, who was in the Taliban government and actually wrote a fascinating autobiography called My Life with the Taliban—he was put in Guantánamo for six years, and then he was released, and he now lives sort of in a default form of house arrest in Kabul. When Rick Rowley and I met with him, he was saying to us, “When I was in Guantánamo, the Americans kept telling me, ‘The Taliban is finished. There’s no more Taliban. All of you—all of your people have been killed or are in prison.” And then he’s like, “Then I come back to Afghanistan, and I find that there are actually more people in the Taliban than when I was originally snatched and taken to Guantánamo.” And the point he made is, “If you kill those of us who grew up, you know, in the ’60s and ’70s, who speak English and understand the outside world, if you kill all of us, you’re not going to have anyone to negotiate with, because this younger generation, that you’ve produced as a result of your global war, are far more militant than we were, and they don’t care about diplomacy at all.” And I actually think he has a really valid point there . . .”