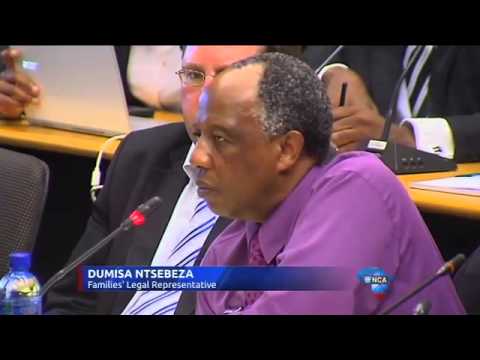 The summer, 2012, massacre of striking mine workers by South African police, which killed 44 persons and wounded at least 78, continues to wend its way through the South African system. The largest casualty toll was on August 16, 2012. The mine is owned by Lonmin and is located in Marikana. South Africa is seeing an unusually large number of strikes in the past year.

E-NC television reports that “Senior police officer unable to support colleagues’ Marikana Inquiry” That is, one explanation given by some in the police for the shooting down of strikers was that they felt endangered at the time. But some of those shot were shot in the back or the back of the head.

Friends Thando and Tulani stand in the shade cast by the roof of the meeting hall. It is 11am and the sun is hot and high as they wait for the Marikana Support Campaign meeting to begin.

Thando is a rock drill operator at Lonmin. Tulani a former Lonmin employee. Both took part in the August 2012 protest, and still feel anger at the National Union of Mine Workers (NUM), the police, and the company.

‘We blame Lonmin,’ explained Tulani. ‘Instead of coming to the workers they called the police.’

‘If Lonmin came to the workers it would have solved the problem,’ said Thando.

‘We also blame NUM, they started to shoot the workers. We were members of NUM before they came out and shot at us,’ added Tulani. Two people were shot and wounded by the NUM shop stewards.

Emotions were running high and in the week before the shootings ten people had been killed, including two police officers and two of Lonmin’s security guards. Lonmin officials have suggested that they thought it was too dangerous to address the workers in person.

An hour later and the low roofed community hall on the Lonmin complex is full with over 200 men and women, too many for the plastic chairs lined up for them. People stand crowded in rows at the back.

As familiar names are mentioned rumbles of anger ripple around the hall. At the mention of Barnard Mokwena, Lonmin’s executive vice president for human capital, many workers break into fevered whispers. As Cyril Ramaphosa, former non-executive director of Lonmin and current deputy of the ANC, is named the whispers turn to shouts of anger.

Twenty-seven year old Mkhuseli has more reason than most to be angry. He was in the first group of men that the police shot at. He survived without being hit, but saw his friends and colleagues gunned down around him.

‘The commission is just run by the government, they are arresting the miners but not the police,’ he tells me sadly.

As the meeting ends Mkhuseli leaves the hall and is greeted by the looming structures of the Lonmin mine, its field of electricity pylons mocking the informal settlement of tin shacks nearby. Most have no power there.

A short walk down the road is the rocky hillside where the shooting took place. Most of the white crosses that had been set to commemorate the dead have been broken and lie in a discarded heap at the foot of the hill.

The miners walk on home. Some stop to show their scars, bullet-wounds in arms, legs, chests. One miner explains that he was shot eight times, three times in the groin. Another, a rock drill operator, is back working down the mines with a shoulder full of metal.

But the wounds go deeper.

‘You see sister,’ Mkhuseli tells me, ‘we are heartbroken.’

Lonmin declined to comment on the issue, stating that it has undertaken not to comment publicly on issues under investigation before it has given evidence and representations to the Farlam commission.

A spokesperson said: “The company believes that this is vital to ensure the integrity of the inquiry, and to avoid pre-empting its processes or subsequent findings.”