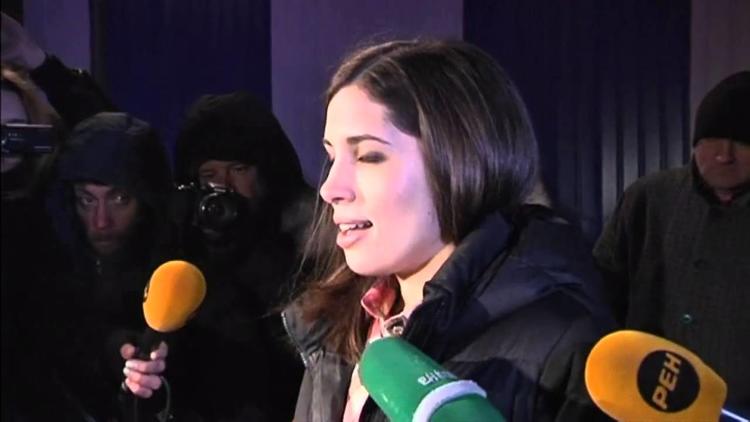 On this occasion of their release, it is worthwhile reprinting excerpts from the translation of an interview by Elena Masyuk with Maria “Masha” Alyokhina and Nadezhda Tolokonnikova from last January that appears on the Free Pussy Riot web site:

Masyuk: “— I attended almost every single day of your [Maria’s} trial at the Khamovniki Court. I often think of Judge Syrova. Do you?

—Hold on, this “grey page” did put you away for two years.

— So you don’t feel any anger or malice towards her?

— Not at all, I don’t feel any anger towards Judge Syrova. I’m not really angry with anyone. I have some kind of desire for justice, and I am hurt that it sometimes it doesn’t happen. But anger is not the feeling I have right now.

— Nadezhda, and in this situation – what would be the justice for you?

— Justice is built up from every second and every moment of life. But if we’re talking about the courts, then justice will definitely be a complete absence of criminal conviction. I don’t believe that our actions had anything criminal about then, as we don’t have any religious hatred or enmity. I think it’s very obvious.

Pussy Riot and the Bible

— Do you regret what you have done back then, in the cathedral?

— No, I don’t. How can you regret something like this?!

— After this trial Pussy Riot became an internationally known band. But now Pussy Riot is being mentioned less and less, and there’s this information that you are not interested in the future of Pussy Riot.

— At the moment I’m doing other things.

— I sew. I was told that in a bit I’ll be sewing half-woolen coats for the officers of the Federal Correction Service. I won’t say that all other matters stopped interesting me – my social or political life, or the general life stuff, but I do understand that right now I’ve no influence on the particular destiny of Pussy Riot. So there’s no point in torturing my own heart with the thoughts of Pussy Riot. So now it’s less of a concern.

Besides, this band is anti-hierarchy, it doesn’t have any leaders or faces, for that matter. So if its former member, former at the moment, meaning me, is in prison, the band just fully passes into the hands of others. I’ve no influence over what these people do, and how. They can create and reinvent the band however they like. I can only advice, as a person in some way related to this band. But apart from that – they are free to do whatever. I can tell me: guys, don’t (for example) commercialize the band, but I can’t forbid this. I’m against any kind of forbidding anyway, I’ve this libertarian approach in this way. I believe that people should do whatever they like, and I can only advice this or other.

— Did you advice Yekaterina Samutsevich not to commercialize?

— Nadezhda, do you feel any kind of pressing here in the colony?

— No, not really, no pressing. I feel pressure from the Russian state, but not from the colony.

I would also like to add something to that question whether I regret anything. I find the wording of this question a bit wrong – It wasn’t dramatic in its nature, the drama was thrown into it later. For some reason they decided to cut out some bits, didn’t show the entire song, the meaning of the song got completely lost, they didn’t say that the song was called “Mother of God, Drive Putin Away” and our gesture was represented as some kind of militant atheism. And of course this interpretation really pains me, I’m afraid when I’m being called a theomachist, yet it also is something of a shared destiny of all the people interested in the ways and fates of religion, and in particularly of the Russian Orthodox Church. Berdyaev was also convicted and even put away for a term, for being an alleged theomachist, blasphemer; and even Dostoevsky, his conviction stated that he’s being accused of “fighting against God and against the Orthodox Church”.

— Yesterday you told me that the philosophy books that you had in the pretrial custody, the whole lot of them, you donated to this colony’s library.

— Yes. So that people can read them.

— Yes, they do. They read Slavoj Žižek.

— Did you tell them about this philosopher?

— No, I don’t think that these books require any special presentation. Slavoj Žižek’s Violence is in itself quite a noticeable book, not least because of its provocative title. Žižek is very fond of provocation, and fond of Pussy Riot – that’s why perhaps. I heard that those who have read this book liked it. The only two books I’m keeping on my bedside now are the Bible and Berdyaev’s The Russian Idea.

— To tell you the truth, when you say “Bible”, I feel like asking: why Bible?

— You are asking this question because, as I see it, you also got a little caught up in this state propaganda. Our actions were more pro-religion, rather than anti-. And it’s something so obvious for me. For me it was a very natural progression from everything I’ve read before, everything I was thinking – I’ve a very profound interest in the Russian religious philosophy, at some point I was reading a lot of Berdyaev, Soloviev, Merezhkovsky, these circles that used to gather in the early XX century. Then Rosanov – they used to meet with the representatives of the Orthodox Church, demanding modernisation of the Orthodox Church. And even back then the Church people used to take it all quite badly, negatively. No modernisation happened. And I just feel that I’m carrying on this tradition of the Russian philosophers, so Bible is quite an organic part of my life.

— Nadezhda, you said that you have registered to visit the church here. Is it to talk to your priest, or for something else?

— I would like to see the local church. It’s here, in the territory of the camp.

— And why can’t you just visit in on any day?

— Well, perhaps because they need to have a regulated amount of visitors at one time. And then, any movement around the colony is structured and regulated. I would like to see the church, and also meet the priest – I heard there are two of them there. I would like to attend their service. I might manage in January.

— Just as a cultural factor? Not as a person who’s looking to turn to the religion?

— I really can’t take its ritual side, because so many people fall into some sort of household religion, this kind of hypocrisy, and even Jesus himself condemned this. As for faith – it’s a complex thing. I’m rather a believer than not, but precisely out of this fear of the hypocrisy I’ll never, or at least, I think never, you can’t really say for certain, but at least any time soon going to get Christianized.

— People say that in the detention zones many turn to religion, because there’s nothing to hope for, apart for god.

— In terms of my self-awareness, nothing has changed since when I was free. So, I won’t say that ending up in prison has suddenly turned me into a religious person. I always had a holistic perception, I’ve always known that there must, most probably, be some kind of destiny, some call it god, you can call it different names, someone will call it Allah. I tend to call it destiny. And this clear sense of destiny has been with me pretty much always, all my conscious life – so, since I was 13 or 14…

And in conclusion I will say…

— Nadezhda, I would like to tell you that many people worry about your fate, it’s true. And maybe there’s something you’d like to tell these people, everyone who sincerely supports you?

— I would like them to be doing something about the political situation in Russia. Because I can’t see how I can be helped right now, realistically, apart from maybe writing me a letter. I don’t need any care packages, because we’ve agreed with the people I’m close with, including my family, that they will be taking care of packages. It’ just – there’s a rather complicated bureaucratic procedure for receiving packages, including having to leave work for a bit, to receive it all in person. So, it’s easier to get one from my guys, and that’s enough. But letters always make me happy. All in all, if people really do empathize, and if they have some strong feeling on this matter, I’d like them to let it out and channel into changing the political situation in Russia. And how – that’s everyone’s personal choice.