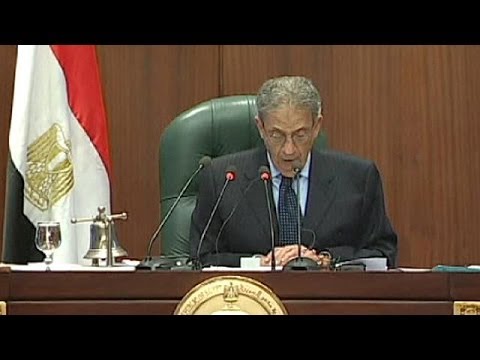 Activist Ahmad Maher turned himself in to Egyptian police on Saturday. He and the April 6 organization played a major role in the 2011 revolution against Hosni Mubarak and went on to organize many protests insisting that the military should go to its barracks. He called for protests against the recently-passed Draconian anti-protest law, hence his arrest.

April 6 sent out the following (bracketed phrases are my attempt to make the translation read more clearly):

(TO THOSE WHO STILL HAVE [A CONSCIENCE])

Ahmed Maher the Founder of April 6 Youth Movement, decided to go to the Attorney general by his own will and give himself to Authorities & despite the fact everyone knows that the judiciary is controlled by the military regime, and our lowers expect that they military can put maher in the jail for a long time with any fake charges… but that will never prevent him and us from going to achieve our dream.

(This is not) a statement,

It’s a call for (those who ) have [a conscience], if you (don’t consider yourself one of them) , leave it to whom considered to be.

April 6 Movement – those who are talking to you today- were the first of some who called for the 25th of January revolution in Egypt, and played a great role in it.

Reason for the January’s revolution was nothing except seeking a better tomorrow for us and for the next generations. That was a dream for freedom , democracy & dignity for every Egyptian. It was and will remain our dream that we struggled for – while the whole world was watching and believing – this dream will stay steady in front of front of our eyes leading us to the future, forms a profit that makes our losses in arresting, jail or even death bearable.

Till the 30th of June wave, which we considered as a remapping of the revolution, [we] thought that the military who killed our colleagues earlier, who [had preserved] Mubarak’s regime, ha[d] changed & became more willing to withdrew from … power, leaving people to govern themselves. [We] mistakenly thought they might be believe[rs] in a true democracy, respect [for] human dignity & settles social equality.

However, days proved that they aren’t better than their predecessors & the procedures for [implementing] corruption & autocracy are working actively .

Now the state of autocracy returning [in every respect] under [the guise of a] war against terrorism, the division of the country & the prestige of the state. But the truth is that they imprison & kill all who have different opinion. No difference between under-aged girls, judges & even youth of those whom their history was a distinctive mark on the heart of this society.

The autocratic country returns in the form of laws that tighten freedoms, giving a card Blanche for hitting, deterioration, and even killing people as a the demonstration law which has been refused from the Egyptian human rights council.

Besides breaking in the life of the people with no discrimination among a mosque, a street or even a university campus. Enacting laws to suppress freedom & imprison the ones who have different opinion as they imprisoned activists who have a history in struggling for human rights as Alaa Abd Al-fatah.

Now they try to imprison Ahmed Maher the Founder of April 6 Youth Movement, broke in his home but they didn’t find him, but Maher had decided to go to the Attorney general by his own will and give himself to Authorities & despite the fact everyone knows that the judiciary is controlled by the military regime, and our lowers expect that they military can put maher in the jail for a long time with any fake charges… but that will never prevent him and us from going to achieve our dream.

Everyday passes we witness more comrades going to jail & revolutionary girls who resist injustice by their slim bodies beaten & thrown in the desert The new protest law which we are prosecuted for breaching is a new tool of repression & gagging opinions & it is considered as worst than the laws of the tyrant Mubarak.

So we will never accept this law which is wrapped in our necks. Besides we will challenge this law with all our strength & we will not be deceived by the tricks of the regime which promotes to the West as this regime deceives Egyptians same as deceiving the international community under the allegations of the war of terrorism & in fact is fighting for establishing the country of repression and Tyranny.

It will not be the fate of Egyptians to choose between religion dealers & military dealers as the smartness of Egyptian people refuse Muslim brotherhood by their deal in religion & military men by their deal in security. The hope still in the generation that will never be conquered by repressive rule & will never be deceived by the allegations of the war against terrorism as quoted by The Martyr Ahmed Al-Masry ” Sacrificing my soul for my country but never accept to see it under Military rule ” cheering it with him. last but not least we will never accept any alternative for Egypt except our dream for Egypt to be a democratic , safe , civil, equal country without militarization as some of stakeholders wants.