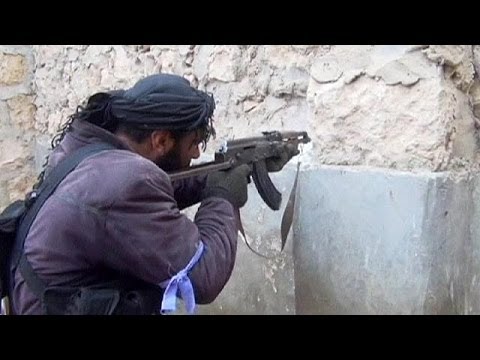 The United States and the United Kingdom have suspended aid to the Syrian National Council and its Free Syrian Army, headed by Gen. Salim Idriss, after FSA warehouses of arms were raided by the Islamic Front. It also captured a key border crossing with Turkey. The Islamic Front, a coalition of fundamentalist groups, has emerged as much more important than the fading Free Syrian Army. While the Islamic Front excludes the two major al-Qaeda affiliates in northern Syria, the Islamic State of Iraq and Syria (ISIS) and the Jabhat al-Nusra (The Succor Front), the fact that it was able to grab materiel intended for the coalition the US and UK dub “moderates” has raised alarms that further aid shipments at this time could fall into the hands of extremists.

Wasi al-Zaman, a Qatar-based Syrian site, wrote, according to BBC Monitoring, on Dec. 10:

The collapse of the Syrian National Council is awkward for the negotiations scheduled for Jan. 22 with the ruling Baath regime, since the SNC was supposed to represent the rebel side. Most of the guerrillas have by now withdrawn from it.

The intrepid Michael Jansen of the Irish Times reports that the Islamic Front is funded and organized by Saudi Arabia. Its moderate bona fides were brought into question on Thursday when its fighters joined the Jabhat al-Nusra in killing 15 civilians from the Shiite Alawite and Druze minorities in Adra near Damascus.

The Congressional policy of arming the rebels, which has yet to be implemented, may be rethought as the specter looms that this “aid” will likely go in the main to the Islamic Front, and probably to the al-Qaeda affiliates. The US went down that road in Afghanistan in the 1980s, and got 9/11 as blowback.