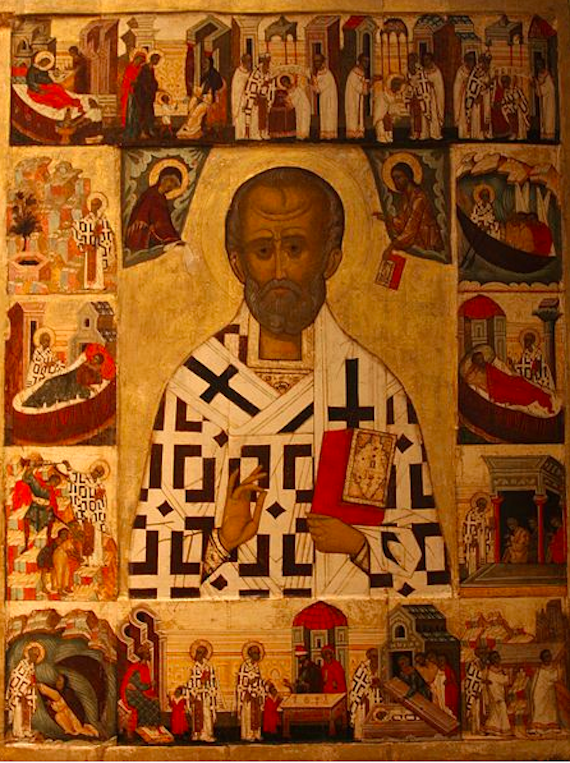 Russian icon of St. Nicholas of Myra on whom the figure of Santa Claus is based.

Santa Claus is a Dutch corruption of Saint Nikolaos, a fourth-century saint from the Mediterranean coast of Anatolia in what is now Turkey. He was also known as Nikolaos Thaumaturge, the master magician.

Eastern Orthodox icons of St. Nicholas (the Latin form of the name) often depict him as dark-skinned, to show his Mediterranean origins.

As David Roediger argued, the American term “white” was deployed by middle and upper class Protestants of northern European origin to demarcate themselves not only from African-Americans but from working class Catholics such as the Irish and from the wave of immigrants 1880-1924 from southern and eastern Europe, including Lebanese, Italians, Greeks, Poles and Jews. The US actually had a Chinese Exclusion Act, and in the hysteria running up to the enactment of racist immigration laws in 1924, some newspapers accused the Lebanese and Syrians of being Asiatic and in the same category therefore as the Chinese and equally undesirable. Only gradually did the Catholic immigrants become accepted as “white.”

Insofar as St. Nicholas was a Greek speaker from Asia Minor in what is now Turkey– and therefore like the Greek and Syrian Eastern Orthodox Christians– he certainly could have faced racial prejudice in early twentieth century America. Omaha Nebraska broke out in an anti-Greek riot in 1909 that left one dead, did over $200,000 in damage to shops and homes, and forced community members out of the city. In the teens and twenties, the Ku Klux Klan, the bastion of whiteness, conducted an “anti-Hellenic” campaign in several American cities. (The Klan was a big important organization in the 1920s and came to power in Indiana, e.g.)

So while St. Nikolaos would probably be considered “white” in today’s America, he would not necessarily have been in the early twentieth century.

Likewise, a Jew from Nazareth would definitely not have been considered “white” by many Protestant Americans in the early twentieth century. There would have been social clubs he couldn’t have gotten into.

But here’s the kicker. Megyn Kelly has an Irish name, and if she is Irish-American, then she would not have been considered “white” by many Protestant northerners in the nineteenth century. There is a sense in which the Irish and other immigrants invented the idea of “whiteness” precisely because they were unskilled immigrants doing the same jobs as African-Americans and needed to distinguish themselves racially in order to lay a claim on a higher social status than their occupations would have warranted. When the first big waves of Irish immigration arrived in the US, the Protestant elite often viewed them as “black” and even attempted to connect Celts to an African origin.

Can we get rid of “white” as a category, please? Its very use is a form of constructed racism designed to exclude rather than include. Can’t we just be Americans? After all, a lot of “whites” have African-American or Latino heritage and do not know it. If we said “Euro-American,” demarcating origin by geography the way we do with other ethnicities, that might make sense. But then the silliness of saying an Anatolian and a Palestinian are “European,” or (as Kelly implies) “Euro-American” would be immediately obvious.