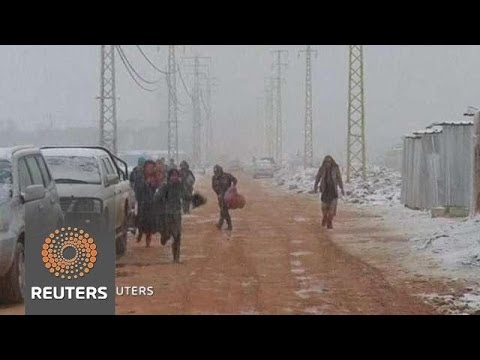 “… the worst of winter is yet to come for 2.2 million refugees living outside Syria and millions more displaced inside the country.

A storm named Alexa is sweeping across Syria and Lebanon, bringing with it high winds and freezing temperatures – and marking the beginning of the third winter since the Syrian conflict began in March 2011…

Men filled bags with dirt to hold down tents and placed car tires and bricks atop the flimsy wooden structures to prevent the wind from tearing them apart.

In Lebanon, more that 835,000 refugees live in tented camps, unused buildings or with friends or family. The Lebanese government has decided not to house them in formal camps due to local sensitivities that they will stay permanently.

Meanwhile, Amnesty International has issued a report slamming the countries of the European Union for only being willing to take in 12,000 of the Syrian refugees.

Germany is by far the most generous – pledging to take 10,000 refugees or 80 per cent of total EU pledges.

Excluding Germany, the remaining 27 EU member states have offered to take a mere 2,340 refugees from Syria.

France offered just 500 places or 0.02 per cent of the total number of people who have fled Syria.

Spain agreed to take just 30 or 0.001 per cent of refugees from Syria.
Eighteen EU member states – including the UK and Italy – offered no places at all.”

AFP has a video report:

Oxfam USA has a contribution page for Syrian refugees here