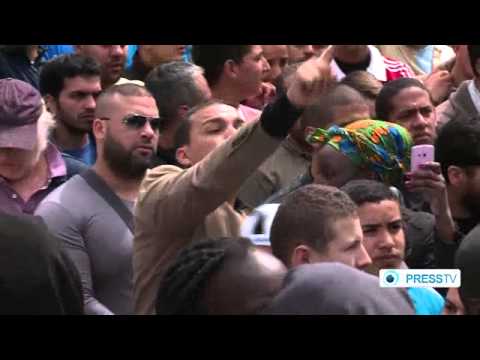 Crystal Night took place on the night between 9 and 10 November 1938. Across the whole of Nazi Germany and parts of Austria, a pogrom was held against Jews. Jewish synagogues, shops, homes and businesses were ransacked which led to the atrocity becoming known as Chrystal Night after the shards of broken glass. It marked the intensification of the persecution of the Jews in the run up to World War II.

The violence that took place on Crystal Night did not happen by chance, it broke out after people’s minds had been primed for many years. The time had come in which the delusion that Jews were the cause of all society’s ills had been planted in the minds of enough people.

Today you can see something similar happening once again in Europe. The mechanism is identical. Racist prejudices about certain groups are brought into circulation, preferably about groups, which are recognizable, by their appearance one way or another. Many of the prejudices are suspiciously similar to what was said about the Jews, in particular allegations which put fear into people: that they have a scary religion, are unreliable and dangerous, want to take our jobs, are criminals and want to take over the world.

Fear is often the ultimate incentive to kill. Nevertheless, a far too large number of bystanders nowadays believe – many of them well-meaning people – that it won’t go that far. They insist that the people should be allowed to express all those negative qualifications, in the interests of freedom of speech. They are not aware that the spread of hate and fear always takes place surreptitiously. Hate and fear nestle bit-by-bit in the minds of people on the quiet and once this has been done, it is difficult to remove them.

There is no doubt that the processes of exclusion are in motion in Europe and here in the Netherlands and that a mass explosion of violence has become a possibility.

But we shouldn’t wait passively until that happens. There is still time to break down the dividing lines!

Exclusion does not always affect minorities. Majorities can also be excluded and discriminated against. That is what happened under Apartheid in South Africa and also in the colonial Dutch East Indies, where I was born. There, it was the large majority of Indonesians and Chinese who were excluded.
At my white primary school, there were no Indonesian children. And they were not to be found in the swimming pool either. I thought that was quite normal. And what is worse: I am quite certain that snippets of racist stereotypes, which justified their exclusion, had already settled in my mind: Indonesians just were stupid and lazy.

When I was seven years old, my colonial luxury life was literally turned upside down from one day to the next and I found myself belonging to an excluded minority over which negative ideas circulated. The Japanese occupied the Dutch East Indies and put all whites behind barbed wire for many years. We suffered hunger, were covered with lice, there was no medicine and people died every day – children too. To keep us under control, the Japanese beat up the women and mothers while we were made to watch.

But it gradually dawned on me that there was no point in escaping: it was not just the visible dividing line of barbed wire that kept us captive; there was also an invisible one. The white color of our skin would betray us outside the Japanese internment camp straight away, among the Indonesians, Chinese and Japanese.

Ever since, I have been able to imagine vividly what that is like to be conspicuous in a majority, which holds prejudices against the minority you, are assigned to.

To all people here in Europe with a dark or so-called ‘colored’ skin, this feeling is a daily reality. They are asked where they come from whether the question is relevant or not. And in today’s deteriorating climate in which they are blamed for many social problems, it soon seems like they have to justify themselves.

People who have never experienced how it feels to belong to a visible minority have the greatest difficulty empathizing with them. That became painfully clear in the recent Black Pete debate, in which this blackface character that accompanies Saint Nicolas, (the Dutch Santa Claus) was accused of being an expression of racism.

Exclusion and persecution are inextricably connected to drawing dividing lines between different population groups. After all, this is what makes it clear who belongs and who doesn’t.
The Nazis designed complicated regulations to draw a dividing line between whom they would and would not murder. It depended on how many of your four grandparents were Jewish and how many were not. And if you were married to a non-Jew, you could escape persecution for a little while longer.
The Japanese also had difficulty knowing who to put into camps and who not to; people who were half-Indonesian/half-Dutch were usually not interned. But what about those who were quarter-Indonesian?

It was not just difficult for the German and Japanese fascists to draw a clear dividing line. It meant that victims were often forced to make desperate personal choices.

Almost no one knows that it was not just the Germans that differentiated between Jews and non-Jews, the Japanese did it too – encouraged by the Nazis, of course. That is why I am so very incredibly glad that the Jewish Historical Museum is preparing an exhibition over Jews in the Dutch East Indies, which opens next July.

I was interned with my mother, who was not Jewish and my sister and brother in a women’s camp. My father, who was Jewish, was far away in a men’s camp and we had no idea whether he had been forced to register whether he was Jewish or not. My mother was put before an inhuman choice. If she said that we, her children, were half-Jewish, she ran the risk of us being taken away and sent to a separate camp. I saw the panic in her eyes. But if she kept it secret and someone betrayed us – after all ‘Wertheim’ is a well-known Jewish name – there would be cruel punishments. She lied that she was Jewish herself, so that we were classified “fully Jewish” and were transported with her to the Jewish camp.

It was worse than the camp we had come from, but not as bad by far as what was happening to Jews, Sinti and Roma, handicapped and homosexuals at that time in Europe. There almost all of my Jewish family on my father’s side was killed. And my grandparents committed suicide the day that the Netherlands capitulated to the German army.

Some people think half-Jewish does not exist, you are either a Jew or you are not one; you have to choose which group you belong to. You automatically do not belong to the other group. But I want to belong with Jews and with non-Jews. I no longer want to be set apart, not by anyone. And I think that applies to many people, because it is not good for anyone to have to cut yourself off from parts of your origin or even to have to hide it.

Today in Europe, there are large numbers of people who are half-Moroccan, quarter or three-quarters or half-Turkish, or quarter-Roma, Sinti, Indonesian, Mexican, Chinese, Antillean, Surinamese or Polish, or whatever. And we can be sure that their number is going to increase by a lot in the future!
Let’s make sure they all feel as much at home here as all other people. Just as much at home as all the migrants who are fully Moroccans, fully Turks, fully Antillean, Surinamese and Polish etc. And of course just as much at home as all the people who have been here for generations, wherever they came from originally and whenever that was!

Let’s not play into the hands of those who would have use set parts of the population apart in Europe for the sole purpose of discriminating against them, by drawing dividing lines between them. The more intermediate forms there are which cannot be classified because they are all mixed up together, the more difficult it will be to release racist prejudices on defined population groups.

And that way there will never be another Crystal Night.

Attacks on Muslim women on the rise in France