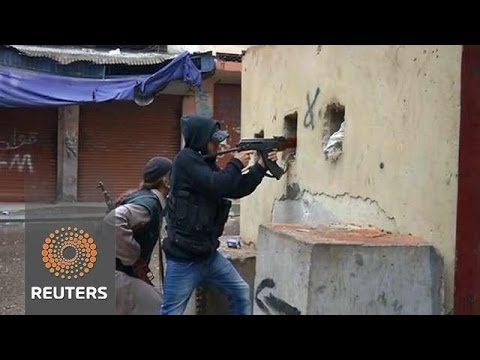 Several dramatic accusations and events have heightened Sunni-Shiite tensions in Lebanon, as the Syrian Civil War continues to spill over onto Beirut’s politics.

In the northern city of Tripoli, Sunni Salafis (who support the rebels in Syria) have fought in recent days with `Alawis (a sect of the Shiites, who support Syria’s Alawite-dominated Baath government), leaving 14 dead. This struggle has been an ongoing one, with several previous outbreaks of communal violence.

Some accused Hizbullah of sending up fighters to help the Alawites in Jabal Muhsin, but Hizbullah denies this.

The Lebanese army came in to the city to stop the fighting and imposed a 6-month period of martial law there. The Shiites are fairly happy with this development, but al-Manar (Hizbullah TV) said that “Tripoli-based Salafist cleric Dai al-Islam al-Shahhal accused [Lebanese Prime Minister] Miqati of “selling” Tripoli, noting that the decision reached in Baabda is “targeted against the Sunni sect.” “We will seek to reverse it and topple it politically,” he said.” (BBC World Monitoring trans.)

Then on Tuesday, the leader of the (Shiite) Hizbullah party-militia, Hassan Nasrallah, openly accused Saudi Arabia of being behind the recent bombing of the Iranian embassy in Beirut. He said that the Abdullah Azzam Brigades, which claimed responsibility, is an “imaginary” organization. He said there is such a group and it is headed by a Saudi, and he suspects that it isn’t autonomous but rather is run by Saudi intelligence. He accused Saudi intelligence of running terrorist groups in several parts of the world.

Saudi Arabia is supporting Sunni rebels in Syria against the government of Bashar al-Assad. In part this is because al-Assad is an ally of Shiite Iran, and Saudi Arabia wants to reduce Iranian influence in the Arab world.

Then a Saudi newspaper, “al-Yawm,” blasted Hizbullah for intervening in Syria on the side of President Bashar al-Assad, saying it inflamed the situation in Tripoli. All Lebanon, the paper asserted, is paying the price for Hizbullah adventurism.

Saad al-Hariri is a Sunni political leader and the son of the late Rafiq al-Hariri, long-time prime minister of Lebanon who was killed in 2005 by a car-bombing widely laid at the feet of the Syrian Baath intelligence. He came out and accused Hassan Nasrallah of being egotistic.

On top of all that, a Hizbullah military commander was assassinated on Tuesday. Hizbullah blamed Israel, this time.

There are two great branches of Islam, the Sunni and the Shiite, which developed in the medieval period. Shiites believe the Prophet Muhammad (d. 632) should have been succeeded by his son-in-law and cousin, Ali b. Abi Talib. Sunnis believe the Prophet was succeeded by four rightly-guided caliphs chosen by the elite of Muslim Arabia at the time, only the fourth of which is Ali. The difference is a little like the Catholic-Protestant split in Christianity.

Lebanon is about 22% Christian, 40% Shiite and perhaps 30% Sunni if you count the whole population including children.