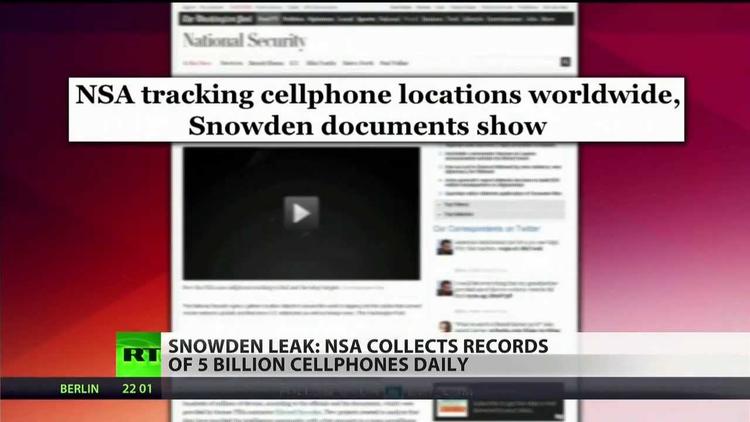 Remember when the National Security Agency officials maintained that they were “only” collecting “metadata” from your cell phones? What they meant by that was that they weren’t listening in on your calls, just noting who you call and when. I said at the time that ‘metadata’ on cell phones inevitably includes information on where you are, so that they are tracking people.

So it turns out that the NSA is actually collecting 5 billion records a day on the location of cell phones around the world, according to the Washington Post, which is using the Snowden leaked documents. The NSA officials deny that they are intentionally collecting that data from American phones inside the country, but of course the way this kind of data works, it is inevitable that a lot of Americans end up having their locations swept up. Plus tens of millions of Americans travel abroad every year. Do we give up our constitutional rights with regard to our own government the moment we leave the shores of the US?

The NSA is carrying out the equivalent of putting Global Positioning Satellite (GPS) device on millions of Americans’ persons. The FBI also tried putting GPS trackers on cars of people they were investigating and just tracking them for a month to six months without a warrant. This is illegal, as the Third Circuit Federal Appeals court in Philadelphia has recently ruled. The government argues that when people are moving around in public it is legitimate to monitor them and they have no expectation of privacy. The judges find that actually people don’t expect someone to be following their every move 24/7 for months on end, and do have a right to more privacy than that unless police can convince a judge there is a reason to issue a warrant. The problem is that Americans being tracked usually don’t know it, and so far the courts have protected the government from having to answer to lawsuits from potentially affected classes of person, on the ground that their standing has not been proved. But there isn’t any difference between tracking us intensively the way the NSA does and tracking us with a GPS device (indeed, the NSA is getting GPS information).

If you had alleged when the Snowden revelations began that the NSA was watching 5 billion cell phones move around, people would have accused you of being crazy. One after another, Snowden’s leaks have shown a situation that is a trillion times worse than the one portrayed by officials. Snowden said that the NSA had tapped into the servers of Google, Yahoo and others and could see us writing an email in real time. Keith Alexander and James Clapper, both of them notorious liars and very likely personally corrupt, said Snowden didn’t understand how the system worked. Google and Microsoft and the others were puzzled because, they said, they hadn’t given the government access to their servers in generally, only to individual accounts suspected of being national security threats. But then it turned out that the NSA had exploited weaknesses in the routing between servers to insert themselves into the data flow. They had it all. Then it turned out that the government is monitoring everyone’s bank accounts and credit card transactions.

Then it turned out that they didn’t just have metadata. They had attached sniffers to trans-Atlantic fiber optic cables carrying phone and email data where they came up out of the ocean in the UK. They and the British GCHQ captured all of it– the substance of emails and not just their addresses, and the substance of telephone calls. Since US traffic bounces around the world through those cables, they were inevitably wiretapping Americans without an warrant.

Now it transpires that the NSA wants to know where everyone is all the time. Obviously they can’t actually watch all those people, but they can mine the data and zero in on any individual they want to. Those not using GPS can’t be pinpointed with exactitude, but their location can be triangulated from the towers. I presume the NSA is capturing GPS data where that feature is working, so those people they can track with precision.

Where they are (“inadvertently”) capturing and storing location data on innocent Americans without a warrant, the NSA is violating (again) the Fourth Amendment, and they are in violation of the recent Federal appeals court ruling.