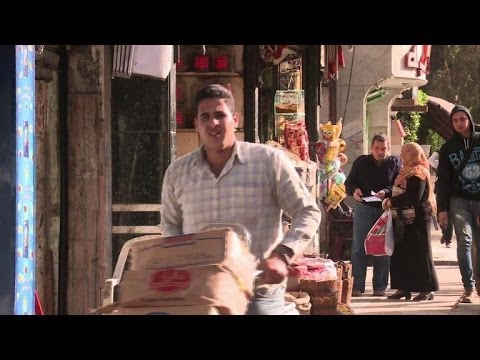 On Monday, the Supreme Council of the Armed Forces (SCAF) announced that Field Marshall Abdel Fattah al-Sisi (also the minister of defense) was free to run for president if his conscience led him to do so. There had been a question whether the officers wanted him to get directly involved in politics. But apparently it is fine with them.

Another controversy broke out, as to whether al-Sisi would have to resign his military commission and resign as defense minister if he declared his candidacy. Although the new constitution does not require these steps, apparently al-Sisi does intend to step down as minister.

The announcement came after thousands of supporters took over Tahrir Square last Saturday to commemorate the 2011 revolution, and spent it asking for al-Sisi to run for the presidency.

The business classes in Egypt have been split into three factions since 2011. There are the government-linked entrepreneurs, who benefit from the huge public sector initiated in the 1960s by the socialist government of Gamal Abdel Nasser. There are the more parasitic and corrupt entrepreneurs who were tied to Hosni Mubarak and benefited from the crony system whereby the public sector was being slowly privatized or used for private profiteering. Then there are the private sector businessmen, many tied to the Muslim Brotherhood.

Al-Sisi represents the government-linked entrepreneurs and other social classes in the state sector. The military itself is a major economic actor, owning some proportion (above 5 percent, below 40 percent) of the economy.

The public sector companies had seen an assault from two directions. From the 1990s, the regime of Hosni Mubarak tried to sell off public firms. In 2004, it sold the state steel firm to steel magnate Ahmad Ezz. He is alleged to have run the state firm into the ground, which benefited his own, private, steel factories. The public sector nevertheless still accounts for over a third of the Egyptian economy.

When Mubarak was overthrown, many entrepreneurs from his circles who had benefited from privatization and from cannibalizing the public sector were put on trial.

During the year June 30 2012 – June 30, 2013 that Muslim Brotherhood figure Muhammad Morsi was in power, the government favored the private sector. As a banned group, the Brotherhood fundamentalists had become entrepreneurs in business fields unconnected to the government. Khairat al-Shater was their leader, and he was a shadowy presence in the Morsi administration.

Workers, especially public sector workers, were left out in the cold by Morsi’s policies. Many of them therefore joined in the massive June 30, 2013, demonstrations against him.

When al-Sisi made his coup on July 3 and appointed an interim government, it sought the support of the workers. In September, the Biblawi government granted public sector workers a raise in the minimum wage from 700 Egyptian pounds per month to LE 1200.

It also went after the religious Right, jailing some 21,000 Brotherhood members, and much weakening the part of the private sector tied to them, expropriating those entrepreneurs.

The Brotherhood had allowed the government’s foreign currency reserves to fall to only $14 billion, down from a high of $32 billion. That depletion of reserves weakened the ability of the government to defend the Egyptian pound, which fell in value by 10 percent in the winter of 2013 alone. Since many Egyptians now depend on imported food and imported wheat for bread, the fall in value of the pound deeply hurt the poor. But it also hurt public sector companies selling to the domestic market that had to pay more for imported raw materials.

Al-Sisi has raised some $16 bn in pledges from the Gulf oil monarchies, which had feared the Muslim Brotherhood as a revolutionary force. That money has replenished the reservers and allows the government to avoid another run-up int eh price of staples. He has thus shored up the foundation of the public sector.

The wealthy as well as workers tied o the public sector had become threatened by the Mubuark government, which was gradually privatizing it, and which gradually lacked the resources to pay public sector workers properly. That failure was one reason they joined with students and unemployed youth to overthrow it.

But what they weren’t going for was a Neoliberal government of private entrepreneurs tied to the religious Right, such as the Morsi governnemnt, so they overthrew that one as well.

Marx, who saw the government as a managing committee for the business classes, viewed the accession to power of Napoleon III after the failed revolutions of 1848 as an investment of power in dictatorship by threatened entrepreneurs and financiers.

The anointing of al-Sisi as the candidate of the officer corps and his popularity with the Egyptian wealthy points to a similar configuration. He is a symbol of order and authority at a time when the foundations of society have been repeatedly shaken. But above all he is the great hope of the social classes that had gotten wealthy off the public sector and off of government licenses. They had been deeply threatened by the revolution. Al-Sisi’s function from their point of view is to continue to shore up the public sector companies, protect the wealth of the governemnt-tied entrepreneurs, and attract more foreign investment and Gulf rent.

So far, he’s been good at all that. Which is why the military and the “left-overs” of the Mubarak regime may make him president.

Egypt’s revolution has thus taken a hard right toward Bonapartism.

Whether there is a liberal Third Republic to be had after the decline of Bonapartism in a few years remains to be seen.