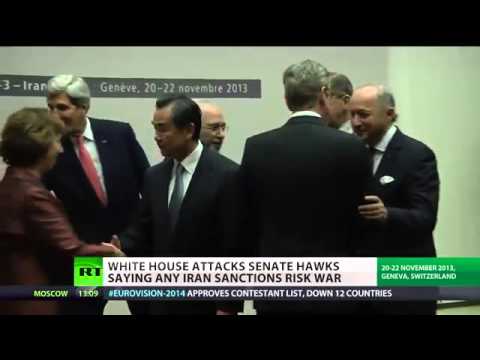 A congressional drive for new sanctions on Iran, backed by the lobbying muscle of the American Israeli Public Affairs Committee, is meeting growing push-back from a public that does not want another war.

"We have an opportunity to stand up and say we're not going to support legislation that will only move us towards war,"

said Greg Broseus, Chicago-based member of Iraq Veterans Against the War, in an interview with Common Dreams. "The goal now is to stop another war before it even starts."

According to the latest count, 59 senators —16 of them Democrats — have thrown their public support behind the Iran Nuclear Weapon Free Act of 2013 (S. 1881), which would advance further sanctions on Iran and impose near-impossible conditions on a final agreement — in what critics, including the Obama administration, say amounts to a call for war. Sixteen democratic senators now publicly oppose the bill, Jamal Abdi of the National Iranian American Council told Common Dreams. Senate majority leader Harry Reid is reportedly holding off a vote on the bill as a bulk of Democrats refuse to declare their position.

Meanwhile, the House GOP is moving to bring the Senate bill to the House floor in a bid to pressure the Senate, according to a report from the Wall Street Journal published Tuesday. This is despite an agreement reached Sunday by Iran and the six world leaders of the P5+1 to start implementing the interim deal January 20.

Lawmakers who oppose diplomacy must contend with mounting opposition from a war-weary public.

"The reports we've been getting back from congressional offices is that a majority of people calling are against the Iran sanctions bill," said Robert Naiman, policy director for Just Foreign Policy, in an interview with Common Dreams. "We're doing much of what we did to stop the bombing of Syria."

"Lawmakers are feeling the pressure," said Abdi, confirming that "calls and letters to lawmakers overwhelmingly oppose this bill." He added, "You have senators coming out who have co-sponsored this bill now saying they have second thoughts."

Sixty-two organizations—including the National Iranian American Council, Havaar, MoveOn, and Daily Kos—released an open letter (pdf) to U.S. senators declaring, "By foreclosing diplomatic prospects, new sanctions would set us on a path to war… We strongly urge you to withhold co-sponsorship of S.1881 and delay consideration of new Iran sanctions while negotiations are ongoing."

This is in addition to numerous petitions urging an alternative to war, as well as public polling that shows a majority of people in the U.S. support diplomacy.

Military veterans and allies kicked off the new year with a rally at the Chicago office of U.S. Senator Mark Kirk (R-IL)—one of the key backers of the bill—to condemn the legislation. New Jersey groups protested outside of the Newark offices of Senator Robert Menendez (D-NJ) and Senator Cory Booker (D-NJ) to demand they drop their support for the legislation.

"Efforts by the US Congress to derail [diplomacy with Iran] would, if successful, constitute a self-inflicted strategic wound even more myopic than its vote to endorse the 2003 invasion of Iraq," writes Stephen Kinzer for The Guardian.

"Sanctions which result in the suffering of ordinary Iranians are a morally bankrupt response to human rights violations," said organizers with Havaar—a group of Iranians, Iranian-Americans, and allies who oppose sanctions, war, and state repression. "The timing of such actions, speak more directly to the interventionist policies of some members of Congress and their primary objective of obstructing diplomatic engagement with Iran."