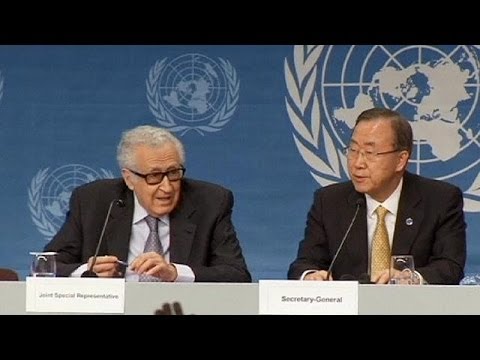 The Geneva II negotiations at Montreux, Switerland, opened on a sour note on Wednesday. Syrian Foreign Minister Walid Muallem droned on interminably and charged the rebel forces with being “traitors” supported by bloodthirsty foreign powers.

Secretary of State John Kerry demanded that President Bashar al-Assad step down in favor of a transitional government acceptable to all sides.

The talks, in any case, will begin Friday, behind closed doors, and the rhetoric may subside if there isn’t a public audience for it.

The most effective rebel fighting forces, some merely Muslim fundamentalist, others al-Qaeda affiliates, were not present. The “moderate” forces were there, but they control only a third of the liberated territory in the north. The Kurds, a tenth of the population, who have set up a mini-state of their own, were not invited.

This round of negotiations has to be seen as for the future. Some regime elements and some rebel ones are going to be involved, if things go as planned, in face to face negotiations. There may be little immediate fruit of such talks, but contacts will be made and ideas will be planted. At some point down the road it may be possible for the second tier people to reach out to one another.

Successful negotiations in my experience only take place when the two sides are tired of fighting and doubt they would gain anything further by more violence. I don’t mean this analysis to be glib or vague. I think you could develop a scale to measure how fatigued the two sides in a struggle are.

Thus, in the 1970s after 1973, Henry Kissinger’s shuttle diplomacy brought Egypt and Israel to the table, and ultimately Jimmy Carter closed the deal. That agreement was possible because Egypt’s military in the 1973 proved they were capable of using technology to cross the Suez Canal and get tanks to the other side, and couldn’t be deterred in doing so. Israel did not want further battles with Egypt a large country of (today) 82 million, and was willing to give back the Sinai if that would make peace. Had Egypt not acquitted itself so well in 1973, the Israelis might not have been ready for Camp David.

The Lebanese Civil war began in 1975 (I was in Beirut then). It raged until the late 1980s In 1989, Saudi Arabia brought the major leaders to the resort city of Taef and hammered out a deal among them. After 14 years of fierce fighting, the two sides had each made a lot of sacrifices, but para-military operations were increasingly fruitless.

The two (or actually more) sides to the Syria conflict are still at the beginning. They think more can be gained from fighting on the ground. They aren’t cynical or worn down enough, despite the horrifying number of deaths that have been taken so far and the displacement of nearly half the country. The regime elements believe they can survive the rebel onslaught. The rebels think the regime’s days are numbered.

In fact, Syria is a stalemate at the moment, with perhaps a slight advantage to the regime.

As UN special envoy Lakhdar Brahimi said, the process got the two sides in the same room, and that is huge.

It will likely be months or years before a second huge step can be taken, of actually finding some compromises.

Euronews reports on the first day of Geneva II: