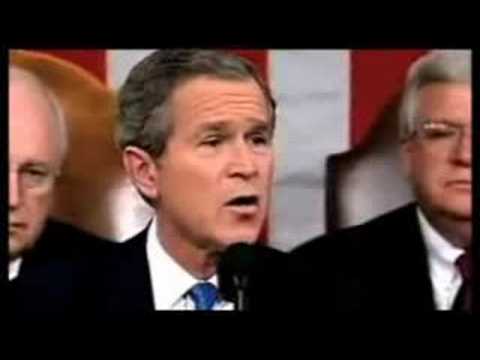 A few days ago I received a personalized letter from your Presidential Center which included a solicitation card for donations that actually provided words for my reply. They included “I’m honored to help tell the story of the Bush Presidency” and “I’m thrilled that the Bush Institute is advancing timeless principles and practical solutions to the challenges facing our world.” (Below were categories of “tax-deductible contributions” starting with $25 and going upward.)

Did you mean the “timeless principles” that drove you and Mr. Cheney to invade the country of Iraq which, contrary to your fabrications, deceptions and cover-ups, never threatened the United States? Nor could Iraq [under its dictator and his dilapidated military] threaten its far more powerful neighbors, even if the Iraqi regime wanted to do so.

Today, Iraq remains a country (roughly the size and population of Texas) you destroyed, a country where over a million Iraqis, including many children and infants (remember Fallujah?) lost their lives, millions more were sickened or injured, and millions more were forced to become refugees, including most of the Iraqi Christians. Iraq is a country rife with sectarian strife that your prolonged invasion provoked into what is now open warfare. Iraq is a country where al-Qaeda is spreading with explosions taking 20, 30, 40, 50 or 60 lives per day. Just this week, it was reported that the U.S. has sent Hellfire air-to-ground missiles to Iraq’s air force to be used against encampments of “the country’s branch of al-Qaeda.” There was no al-Qaeda in Iraq before your invasion. Al-Qaeda and Saddam Hussein were mortal enemies.

The Bush/Cheney sociocide of Iraq, together with the loss of tens of thousands of U.S. soldiers’ lives, countless injuries and illnesses, registers, with the passage of time, no recognition by you that you did anything wrong nor have you accepted responsibility for the illegality of your military actions without a Congressional declaration of war. You even turned your back on Iraqis who worked with U.S. military occupation forces as drivers, translators etc. at great risk to themselves and their families and were desperately requesting visas to the U.S., often with the backing of U.S. military personnel. Your administration allowed fewer Iraqis into the U.S. than did Sweden in that same period and far, far fewer than Vietnamese refugees coming to the U.S. during the nineteen seventies.

When you were a candidate, I called you a corporation running for the Presidency masquerading as a human being. In time you turned a metaphor into a reality. As a corporation, you express no remorse, no shame, no compassion and a resistance to admit anything other than that you have done nothing wrong.

Day after day Iraqis, including children, continue to die or suffer terribly. When the paraplegic, U.S. army veteran, Tomas Young, wrote you last year seeking some kind of recognition that many things went horribly criminal for many American soldiers and Iraqis, you did not deign to reply, as you did not deign to reply to Cindy Sheehan, who lost her son, Casey, in Iraq. As you said, “the interesting thing about being the president” is that you “don’t feel like [you] owe anybody an explanation.” As a former President, nothing has changed as you make very lucrative speeches before business groups and, remarkably, ask Americans for money to support your “continued work in public service.”

Pollsters have said that they believe a majority of Iraqis would say that life today is worse for them than under the brutal dictatorship of Saddam Hussein. They would also say George W. Bush left Iraq worse off than when he entered it, despite the U.S. led sanctions prior to 2003 that took so many lives of Iraqi children and damaged the health of so many civilian families.

Your national security advisor, Condoleezza Rice, said publically in 2012 that while “the arc of history” may well turn out better for post-invasion Iraq than the present day violent chaos, she did “take personal responsibility” for the casualties and the wreckage. Do you?

Can you, at the very least, publically urge the federal government to admit more civilian Iraqis, who served in the U.S. military occupation, to this country to escape the retaliation that has been visited on their similarly-situated colleagues? Isn’t that the minimum you can do to very slightly lessen the multiple, massive blowbacks that your reckless military policies have caused? It was your own anti-terrorism White House adviser, Richard Clarke, who wrote in his book, Against All Enemies: Inside America’s War on Terror, soon after leaving his post, that the U.S. played right into Osama bin Laden’s hands by invading Iraq.

Are you privately pondering what your invasion of Iraq did to the Iraqis and American military families, the economy and to the spread of al-Qaeda attacks in numerous countries?

P.S. I am enclosing as a contribution in kind to your presidential center library the book Rogue Nation: American Unilateralism and the Failure of Good Intentions by Clyde Prestowitz (2003) whom I’m sure you know. Note the positive remark on the back cover by General Wesley Clark.