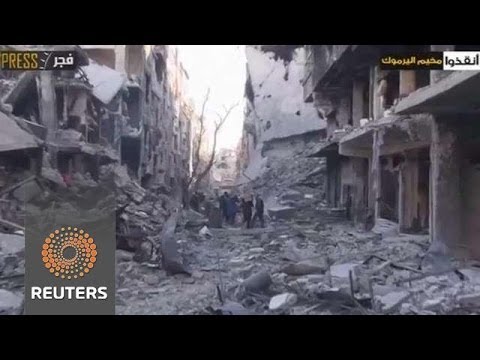 Syria, like many countries in the region, is a demographically young country. With a population of 23 million. Slightly over a third are estimated to be below the age of 14. The ‘Arab Spring’ had its well-spring in such demographics. If a lack of hope heralded hopeful changes; it has been a lack of continued, analytic interest that has dampened spirits. A curiously conflicted, sugar-sweet media seems to have already shelved any interest in a Tunisian post-grad who immoliated himself because his non-license to sell vegetables was hastily curtailed. Tunisia: along with in depth analysis of Libya, Iraq or Afghanistan, seems to have joined a pantheon of countries whose fleeting, outside consideration has been passed-by. In the great race for the next jarring, filmed horror. Syria seems to have bucked this trend in recent weeks and the first question must be to ask, resoundingly, why?

Last September, a hasty withdrawl from an impending direct military involvement by America and UK was followed by a period of intense diplomatic activity and the mere hint, that ageing politicians could sometime, somehow, deliver a degree of Realpolitik to a cauldron of dangerous political theatre. But political pragmatism is often driven by perceived fear rather than adult responsibility. My perception is that it is fear, rather than wisdom, that is currently driving the situation.

Unreported wars spell danger for all concerned. Under-reported wars portend disasters. Such has been one of the outwardly binary, inwardly myriad, divisions of the conflict. A State that has run its media campaign with a degree of stealth and effective exclusion of key, traditional media players. A shapeless, unquantifiable opposition that has been overly reliant on social media. Both have hastened a sense of impasse and exacerbated the scale of misery for those on the ground.

A tentative arrangement is in place only days away from the scheduled meeting. As the forces arraigned against Assad continue to not only fragment but openly fight against each other.

It has been the UN who have stepped into the breach to try and organize a humanitarian awareness campaign. Ban Ki-moon has maintained that 9 million Syrians are in need of humanitarian assistance. There are 6.5 million Syrians internally displaced and 2.5 million are registered as refugees. Some of this renewed impetus has undoubtedly come from European nations. Turkey, facing its own nascent political concerns, will be wary and weary of the flow of refugees across its contiguent Syrian border. But it is the general economic situation that will no doubt have set alarm bells ringing from Greece to the United Kingdom. Many nations will have decided, as jingoism/exenophobia establishes itself as bedrock of political touch paper intranationally. Within the largest trading bloc in the world. That the inclusion/exclusion. Of a vast array of displaced citizens is best avoided. For now.

Lebanon occupies an even more fragile political and demographic space. A tiny country of less than 4.5 million people has seen the biggest influx of refugees. UNHCR estimated that over 800,000 refugees are present in the country. The majority denied the ability to work and almost all prevented from settling.

By contrast; eighteen European states have formally admitted zero refugees. This includes the UK. Whose media airwaves over the holiday period were dominated by an apparent influx of migrants from the newly established European Union countries of Bulgaria and Romania. Latest figures suggest that 30 people have made the legal, comparatively safe journey from Romania to the United Kingdom. Contrastingly; Bulgaria has 11,000 Syrians within its borders.

Perhaps this in part explains, why the UN, post-Iraq emasculation, is desperate to establish a presence on the staged diplomatic world. A presence to be hugely welcomed within nations that seemingly lack coherent, joined up thinking.

As ever; key players are often miles away from the misery and immediacy of needed solutions. Messrs. Kerry and Lavrov have undoubtedly played exceptional personal roles within very difficult scenarios and briefs. A degree of enlightened politic – post-Mandela style – rings loudly enough around the area and arena, to demonstrably make a difference. Over the coming weekend, The Secretary’s of States, from both America and Russia, have huge in-flite opportunities as they travel to Vienna. As a choice of movie, both could defer to one of the classic film noir plots from the 1940’s. ‘The Third Man’, set in Vienna in 1949, starred Orson Welles as Harry Lyme. Based on a screenplay and novel by Graham Greene, the story managed to expose the vagaries of post-World War Two conflicts. Riven with corruption, acrimony, danger and displacement. The central characters risked coming to blows on a huge ferris wheel high above a fractious state. The plot was convoluted. The score magnificent – played out on a classic Chinese instrument, the zither, incidentally. Culmination in a scene, played high above the city, in a revolving ferric wheel.

It remains haunting, ominous and unforgettable.

For the youth and families of Syria. Today, yesterday and tomorrow. None of this matters.

Delivering a safe, secure and consistent supply of aid will be more of a priority than any amount of platitudes over the coming days. Merged, unconditionally, with a cessation of conflict.

A number of key players, unlimited by the constraints of their own nations, personalized beyond the constraints of ideological beliefs, have started to move towards such a realization. That in this time of the explosion of information, very few have a firm grasp of what is going on. Fear, rather than fealty will drive change.

For sure: it is fear that is driving any focus on the issues that Syria presents. From Europe to Aleppo and the United Nations Security Council. From Istanbul, Washington. Beirut to Athens. I hope for a focusing of minds. The alternative is continually lighting a dangerous, revolving, incendiary.

Geneva Two is vitally important. A European State mired in its own, ongoing economic struggles. Apparently reluctant to assume a fiscal and demographic duty of care. A rush to intervene, militarily. Thankfully suspended. Tentatively wed to a new political realism. Leaves Levant children in the cold and hungry. Looking scared, skywards. And a generation of lost, displaced parents. Spread like economic spores throughout vulnerable regions. Much of this feels more like an economic schism, than a war based on religious fraction.

There is much to be said about regional players. From Saudi Arabia to Quata, to Iran and the ‘economic’ quotient. Of children and suffering and hardship and displacement, that is finally starting to register.

Secretary of State John Kerry is a late, seemingly, enlightened arrival at the party. Vienna is suddenly a focus. The guest list will be one to watch.

Like much of the increasingly torpid coverage of an increasingly shocking conflict. It will be the absence of coats on hooks that decides the menu that day.

Martin Gascoigne is a freelance writer and care worker in UK and South
East Asia.