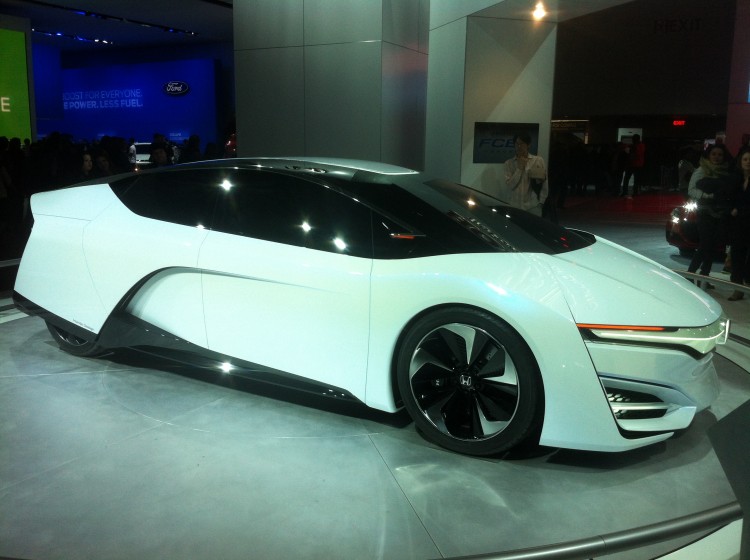 I dropped by the Detroit Auto Show this weekend (its last this year) at Cobo Center as it was wrapping up. Regular readers know that I am a big fan of electric vehicles and plug-in hybrids, so I had a lot of fun window shopping and fantasizing. I have a Chevy Volt and I put solar panels on my roof, as most owners of electric vehicles tend to do. They help to pay for each other and accelerate the carbon savings. Stanford scientist Tony Seba is convinced that by as soon as 2030, solar power will have killed off oil, gas and coal. I think he is right. The cost of the solar panels is falling rapidly and so much research and development money is going into the industry that new efficiencies and price free falls are highly likely.

I was shocked to see how many of the gasoline cars on display at the auto show got 18 or 20 or 24 miles to the gallon. In 2014! That is ridiculous. Why would you do that to yourself or to the earth? (My Chevy Volt has gotten an average of 100 miles/ gallon this past year, but that is only because we take it beyond the electric range about once a week. If I just commuted and drove inside Ann Arbor, I’d be getting the equivalent of 250 miles/ gallon according to Chevrolet).

I can’t understand why, in 2014, you would buy anything but a plug-in hybrid or an electric vehicle if you are a homeowner and needed a car. (Apartment dwellers still often have no access to an electrical outlet where they can plug the car in; it is like an appliance, such as a refrigerator). Gasoline is extremely expensive, and burning it causes catastrophic climate disruption, including over time extreme global warming.

As for price, if you figure in savings on gasoline and the current tax incentive, the EVs aren’t that much more. Sometimes people characterize the Volt as expensive, but they don’t seem to understand that it is a luxury car. In fact, at its current price it is a steal (Chevy dropped the price steeply and you still get a $7500 tax break on it). The Prius plug-in hybrid is relatively affordable for the middle class after the tax rebate, as is Ford’s C-Max Energi, which is currently the least expensive plug-in hybrid at $29,000 or so after the tax break. All these prices will come down as the batteries improve and get cheaper over the next few years.

Now we will depart the mundane world of only slightly expensive cars for the Auto Show fantasy window shopping trip. The fun of the auto show is to live above your means in your imagination for a couple of hours. Take us out, Scotty.

Here is some of the EV eye candy I came across as I unscientifically wandered around. Some are concept cars in development, which won’t be on the market immediately. Others are being implemented. I’m no doubt slighting some companies, but as I said this wasn’t meant to be systematic, just a fun outing: 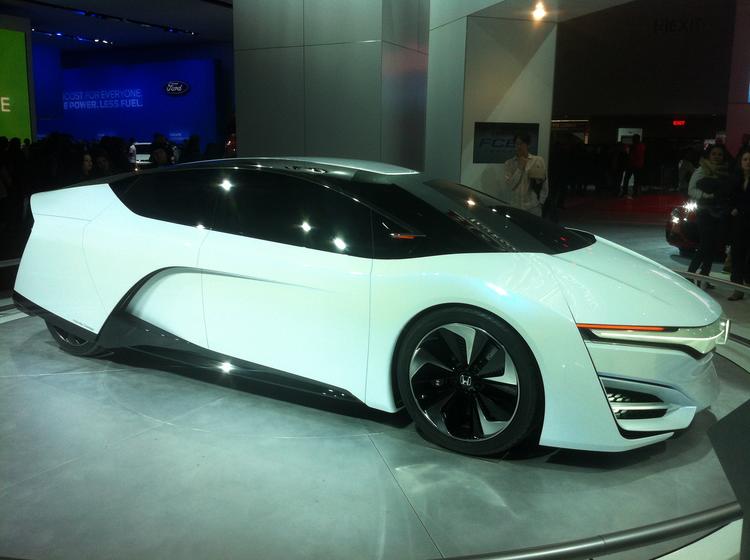 The BMW i8, a plug-in hybrid, with the DeLorean style driver side door: 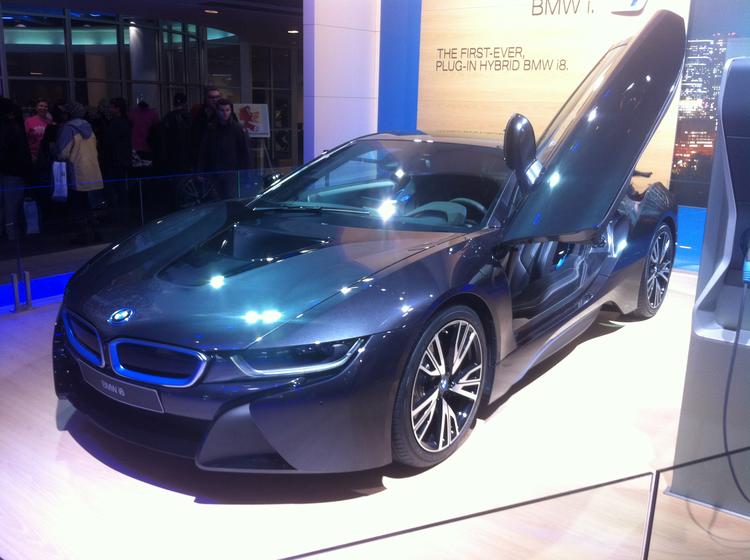 The Concept car BMW Vision EfficientDynamics created excitement and very positive feedback at the IAA 2009. The BMW Vision EfficientDynamics made it clear that an emotional sports car with the fuel economy of a small car is no contradiction and could soon be reality. After successful initial testing of the vehicle concept, the decision for a series-production vehicle was quickly made. The BMW i8 Concept is the next step in the evolution of the BMW Vision EfficientDynamics Concept. The result: The most progressive and innovative sports car of its time. Its innovative plug-in hybrid concept combines the modified electric drive system from the BMW i3 Concept – fitted over its front axle – with a high-performance three-cylinder combustion engine producing 164 kW/220 hp and 300 Nm (221 lb-ft) at the rear. Working in tandem, they allow the two drive systems to display their respective talents to the full, delivering the performance of a sports car but the fuel consumption of a small car.

Acceleration of 0 to 62 mph in under five seconds combined with fuel consumption in the European cycle of under three liters per 100 kilometers (approx. 94 mpg imp) are figures currently beyond the capability of any vehicle powered by a combustion engine of comparable performance. Thanks to its large lithium-ion battery, which can be charged from a domestic power supply, the BMW i8 Concept can travel up to 20 miles on electric power alone.”

Here it is from a different angle: 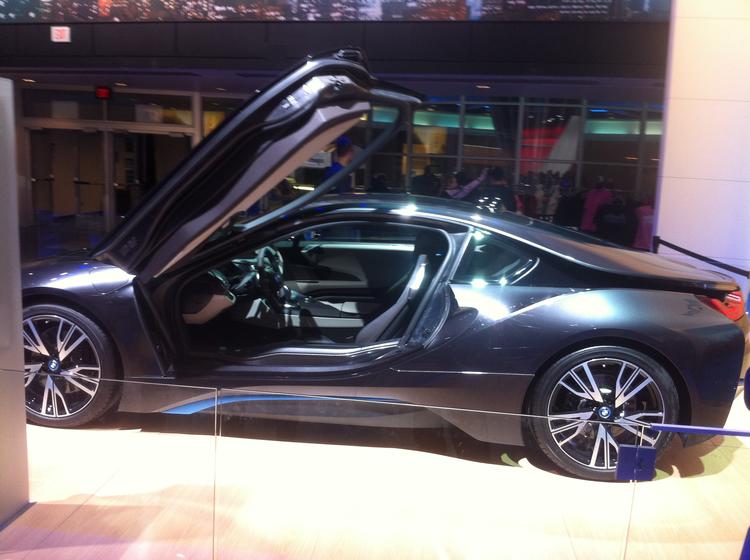 And here is Mercedes Benz’s B-Class Electric Drive, which will be for sale this summer: 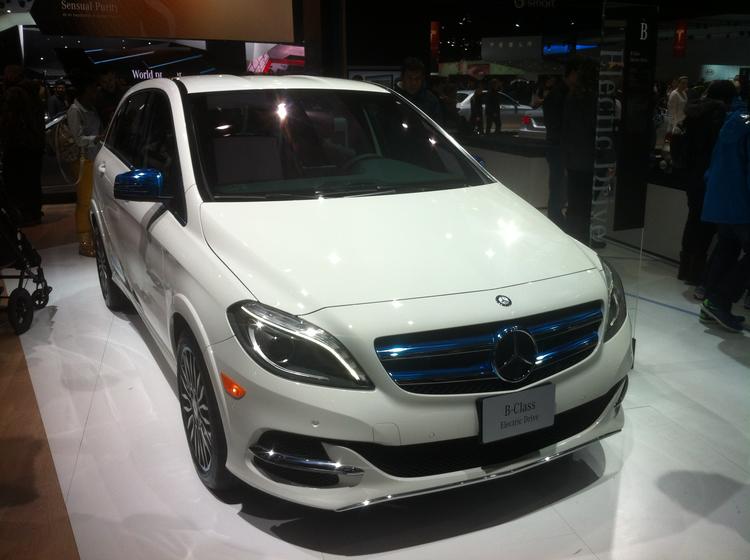 “With lively performance, networked technology and uncompromising comfort in a sporty package, the groundbreaking B-Class Electric Drive paves the way to an earth-friendly future at a surprising pace.

Based on the conventionally powered B-Class that’s already a bestseller overseas, this zero-emission variant boasts an advanced electric motor that delivers 174 horsepower and a range of more than 100 miles* on a single charge. It’s a fresh, fully connected approach to driving that’s equal parts responsibility and exhilaration — and every part Mercedes-Benz.

Want to ride ahead of the curve on every trip? The all-new B-Class Electric Drive will be available starting summer 2014 at authorized Mercedes-Benz dealers in select states — CA, CT, MD, OR, NJ, NY, RI and VT — and then nationwide in early 2015. Look for more updates soon.”

Of course, Elon Musk’s Tesla was there: 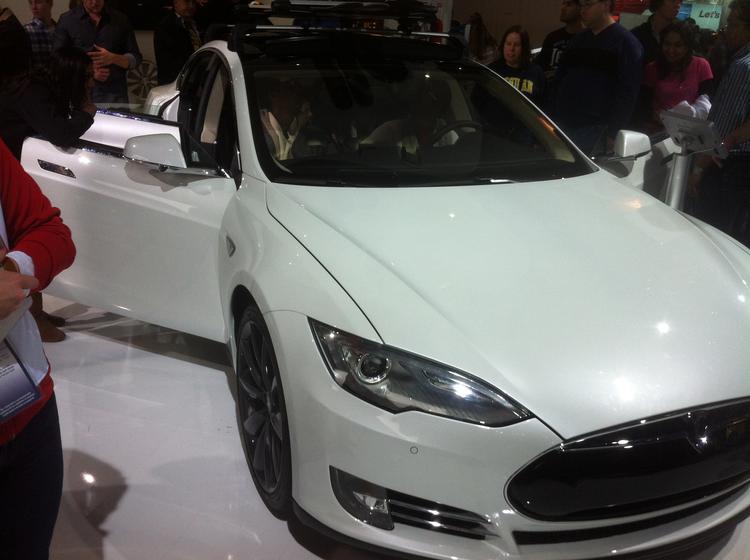 I talked to the sales person at some length. You buy this car on the web and design it for your purposes. Most buyers in Michigan seem to get an $80,000 to $90,000 version. They will release a $38,000 version in 4 years. This car goes 300 miles on a charge in good weather (batteries don’t like cold, so performance is cut in mid-winter). Tesla is putting in fast charging stations all over the country. There is also an adapter so you can charge from any outlet overnight. The sales people don’t work on commission, they just get a salary, so they don’t lowball you or play any of those games. There is a team in each major city that can arrange a test drive. Obviously most of us can’t afford this car now, but likely a lot of us will be able to in 5 years, and it will revolutionize driving.

And here’s an electric Porsche, the plug-in hybrid version of the Panamera. OK, so this one is more expensive than most Teslas and costs what a suburban house does in most of the country and looking at it induces some guilt. But maybe guilty pleasure: 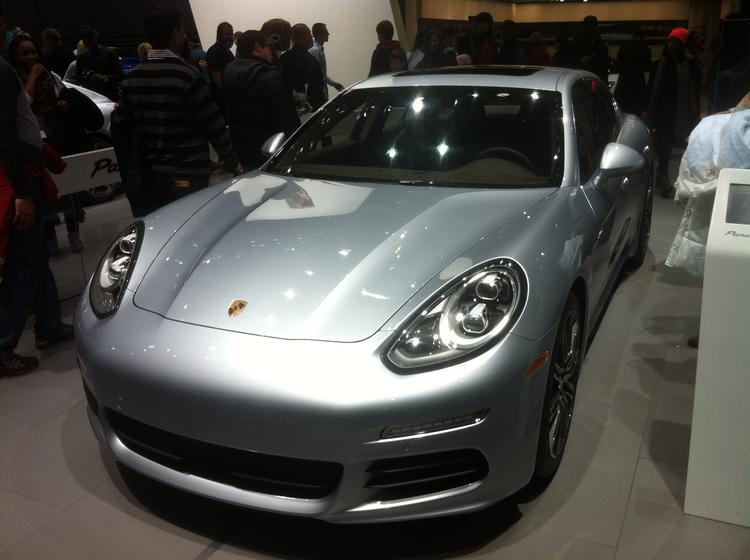 The non-plug-in hybrid version is just as expensive, and destroys the environment. So if you’re going in this direction, this version is preferable.