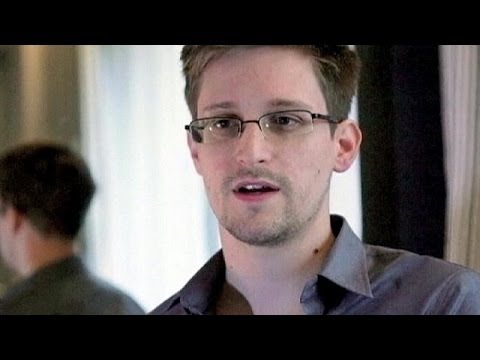 The propaganda wars in Washington continue over Edward Snowden’s revelation that the National Security Agency and other Federal government departments have in the past decade quietly abolished the Fourth Amendment of the Constitution, without even telling us that is what they were doing. All Americans, once proud, free citizens of a republic with a rule of law, are now under 24/7 surveillance by their own government, which insists on storing information on their cell phones, including their whereabouts and everyone they call. Via cooperation with the British GCHQ, the US government actually sweeps up American email texts and telephone calls that happen to bounce off servers in Europe and Asia. President Obama and Rep. Mike Rogers (R-MI) keep denying the latter, but the Snowden material demonstrates it.

NSA employees were given talking points in defending their trashing of the Constitution suggesting they change the conversation to terrorism, even though there is zero evidence that the massive domestic surveillance of Americans has forestalled any terrorism at all. And, that consideration is beside the point if what the NSA is doing is illegal and unconstitutional, i.e. if it is conducting warrantless searches of the papers and effects of innocent people. When police use excessive force and kill an innocent bystander, we don’t say “aw, that’s all right. The police keep us safe from criminals.” Breaking the law is breaking the law and there is no instrumental excuse for it.

Al-Qaeda in particular has been using hard copy and face to face communication for a decade. That is why they couldn’t find Usama Bin Laden all those years. Or as W. used to say, “He’s hidin’.”

But since they’re bringing up endangering US troops, here are all the ways the Washington politicians have put soldiers’ lives unnecessarily at risk in recent years:

1. Going to war on false pretenses. The invasion and occupation of Iraq, which killed over 4000 troops, wounded over 30,000 badly, and inflicted some injuries on some 100,000, was sold on the incorrect allegation that Iraq was near to having a nuclear weapon and had deadly Weapons of Mass Destruction that it might use on the US. That case was false, and most likely an outright lie. You can’t endanger US troops in a more thorough way than by sending them into a dangerous country based on false allegations.

2. Going to war in the teeth of international law. The Bush administration was not authorized to attack Iraq by the UN Security Council. Under the UN charter, one country may attack another only in self-defense or as a result of a call for the use of force by the UNSC.

3. Extending tours from 6 months to 18 months and making troops do 3 and 4 tours. Before the Iraq War the exposure of soldiers to the deadliest situations in war was somewhat limited. Because of the relatively small professional army, the Bush administration over-used the troops.

4. Trying to militarily occupy large, rugged Muslim countries. After the horrors of the age of colonialism, Muslim populations are touchy about white people tramping around their country in army boots and ordering them around. Where they can’t forestall such neo-colonialism politically, they turn to guerrilla war to get rid of the invading troops. Former Secretary of Defense Bob Gates said that anyone contemplating another Asian land war should “have his head examined.”

5. Sending troops into dangerous situations, including exposing them to improvised explosive devices (IEDs), without the proper equipment. When challenged on the need for armored shields for military vehicles in a bomb-rich environment, then Secretary of Defense Donald Rumsfeld said, “you go to war with the army you have.” But Rumsfeld didn’t need to go to war at all, and had plenty of time to plan for procurement of needed equipment (or could have made time if he hadn’t been in such a hurry to get to Baghdad.)

Mike Rogers and the others accusing Snowden of endangering US troops are the ones who made the fatal decisions that left thousands of them dead in fruitless wars.

To the extent that the FBI and other law enforcement or intelligence agencies have over the decades attempted to quash dissent and have been happy to spy on dissidents in an effort to get information with which to ruin their reputations, they have prevented public discussion of poorly thought out war efforts such as Vietnam and Iraq. In a democracy such a discussion and such dissent is essential to public decision-making.

That is why Snowden’s revelations, in potentially allowing us to have an informed public discussion of the issue, are the service of a whistleblower to the public. And they may well end up protecting our troops from the rash decisions or unfounded of chickenhawk politicians.