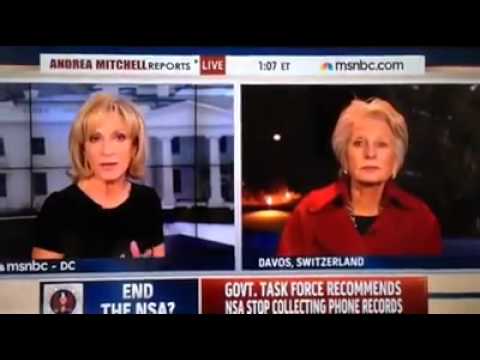 The real irony of interviewing Harman on NSA spying is that, as Ryan Gierach points out, she is both a victim of it and a big defender of it, which sounds suspicious and possibly corrupt:

” The potential for abuse of privacy drives him to increase oversight, especially in light of a Senator Bernie Sanders’s reminding us of a recent story that involved a Southern Californian congress woman whose phone was tapped by the NSA without FISA approval in 2005 or 2006.

No one to this day knows if Rep. Jane Harman, called the “most crucial defender of the Bush warrantless eavesdropping program,” using her status as ‘the ranking Democratic on the House intelligence committee’ to repeatedly praise the NSA program as “essential to U.S. national security” and ‘both necessary and legal,’” was blackmailed by the Bush administration for an allegedly corrupt agreement she made on that phone call with an alleged Israeli spy. “

When she was in Congress, Harman was allegedly offered the chairmanship of the House Intelligence committee by an Israeli spy in return for her lobbying for reduced charges against operatives of the American Israel Public Affairs Committee who had been charged with espionage.

The conversation was allegedly picked up by the NSA.