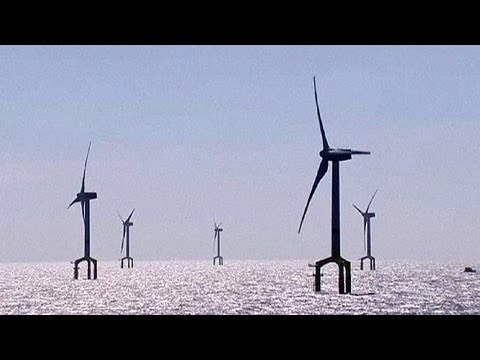 The miserable record of the United States in tackling its deadly carbon dioxide emissions (5 billion metric tons a year) sometimes obscures how very possible it is for industrial economies to go green. Spain, a country of 47 million, was nearly at 50% renewables for electricity generation in 2013.

That 50% from renewables doesn’t count another 21% from nuclear, which although not renewable is relatively low-carbon. As a result, in 2013. The gains were very significantly from increased wind power generation. Wind gave Spain 21% of its electricity last year, equaling the output of its nuclear reactors and increasing over the previous year by 12%. Solar also contributed, and expanded, despite the Rajoy government’s hostility to it. Heavier than usual rains also upped the yield from hydroelectric.

Because of the increased wind, solar and hydroelectric output, coal-fired plants generated 27% less electricity than the previous year, natural gas was off 34%, and even nuclear fell a bit, to 8.3%.

Spain demonstrates that a modern industrial economy can successfully integrate large amounts of wind and solar into its grid without making it unstable. In fact, it seems entirely possible that Spain could be 100% carbon free with regard to electricity generation, because of its nuclear reactors. Fossil fuels are already only 30% of its power mix. Reaching that goal will take longer than it might have because the current corrupt, conservative government is hostile to renewables. But the conservatives seem likely to me to lose the next elections, and Spain’s momentum on solar and wind is so great that it just wouldn’t take much to polish off the coal plants altogether. While getting to this point has cost something in government subsidies, the savings if global warming can be slowed will be enormous, especially for Spain, which is threatened with desertification if the temperature goes up 9 degrees F. Wind and solar are probably grid parity now in Spain, so that further subsidies are probably not crucial to increased renewables, though they would speed the change-over.

Portugal (pop. 10 million) did even better in 2013. In the first three months of the year, fully 70% of its electricity came from renewables. In June, that was 72%. Some 37% of that came from hydroelectric. But wind turbines did 27%. Portugal redid its electricity grid in the early zeroes and uses computers to mix energy sources. It also uses hydropumps, using solar and wind to pump water uphill, releasing for hydroelectric power when the sun isn’t shining or the wind isn’t blowing. The wind blew a lot this year.

Denmark also reached the 40% benchmark, largely through increased wind power generation. Although it has a goal of being 100% green in 2050, it clearly can go faster than that, and ought to have Scotland’s ambition of depending entirely on renewables by 2020.

Five years ago, the countries with high levels of electricity generation from renewables relied primarily on hydroelectric. But just in the past two or three years, wind power in particular has expanded so much that it is equaling or outstripping hydroelectric in many countries (as in Spain).

There is a meme that coal plants are being killed off by cheap natural gas from fracking. But these analyses slight the impact of wind power in particular. In 2013, virtually all the closings of coal-fired plants in the US were owing to inability to compete with wind power. Fracking itself probably cannot compete with increasingly inexpensive wind and solar, and will go by the wayside soon.