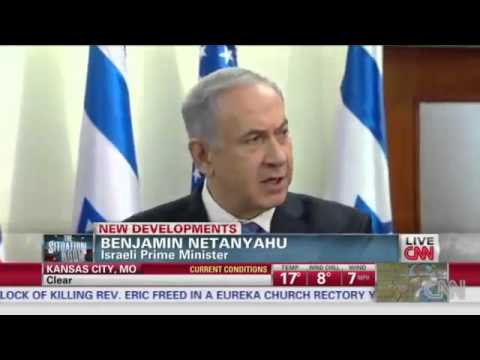 Israeli Prime Minister Binyamin Netanyahu is adding a fifth demand to his negotiations with US Secretary of State John Kerry and Palestine President Mahmoud Abbas: That the Palestinians recognize Israel as a “Jewish state.”

For Netanyahu’s demand to make any sense, he first has to define “Jewish.” “Jewish” has a number of possible meanings. It can mean “those recognized by Talmudic law as members of the Jewish ‘race’ via maternal descent.” The latter is the legal definition of Jewishness in Israeli law itself, and for this reason we must presume that it is what Netanyahu has in mind. It can also mean “adherents of the Judaic religion,” and we can explore those implications, as well.

Of the some 6 million self-identified Jews in Israel, about 300,000 are not recognized as “Jewish” by the Chief Rabbi and there is no prospect of them being recognized as Jewish any time soon. They were allowed to immigrate to Israel because they had at least one Jewish grandparent, but if their mother was not Jewish neither are they.

It is worse. Genetic testing of European Jews (Ashkenazim) shows that most women in that community are descended from European Christians who converted to Judaism when they married into the Jewish merchant community, which was likely established at Rome and then points east from about 800 CE (A.D.) If the Grand Rabbi took haplotypes seriously, most Ashkenazi Jews would have to be declared “not Jewish” by the Talmudic criterion, since their mothers do not have the distinctive patterns in their mitochondrial DNA showing descent from the inhabitants of the ancient Levant.

So is Israel as a “Jewish state” actually only for Eastern Jews or Mizrahim, with Ashkenazis second-class citizens?

Then, if instead “Jewish” means “observant adherent of Judaism” then that definition would exclude a lot of Israeli Jews. Only 66% or so of Israelis in polling assert that that “I know God exists and have no doubt about it.” While only 6% are outright atheists, another 28% appear to be agnostics. Since Palestinian-Israeli Muslims are mostly believers, it is likely that the percentage of Jewish agnostics and atheists is even higher than the nationwide estimate suggests. There is no legal requirement that Israeli Jews be observant believers. Would recognizing Israel as a “Jewish” state impose such a requirement?

Saying Israel is a “Jewish” state in the sense of race would be analogous to insisting that the US is a “white” state and defining Latinos as “brown.”

And saying Israel is a Jewish state in the sense of observant believers would be like asserting that the United States is a Christian state even though about 22% of the population does not identify as Christian (roughly the same proportion as non-Jews in Israel). The point of the US first amendment is to forbid the state to to “establish” a religion, i.e. to recognize it as a state religion with privileges (the colonists had had bad experiences with Anglicanism in this regard). While we can’t stop other countries from establishing state religions, we Americans don’t approve of it and won’t give our blessing to it, as Netanyahu seems to want. In fact our annual State Department human rights report downgrades countries that don’t separate religion and state.

While some countries have a state or official religion, that is different from what Netanyahu is demanding. Argentina’s constitution says Roman Catholicism is the state religion. But Argentina is not a “Catholic state” either in the sense of being mainly for people of Catholic religious faith (only 20% of Argentines are observant) or for being for persons descended from traditionally Catholic populations. Indeed, Argentina has about half a million Muslims, who are not discriminated against in Argentine law the way Palestinian-Israelis are discriminated against (their villages not ‘recognized’) in Israel. Anyway, as I said, in the U.S. we don’t approve of that part of the Argentine constitution. If all Netanyahu wanted was that Judaism be the ‘state religion’ of Israel, that could surely be achieved by a simple vote of the Knesset. He wants something much more, something that requires that outsiders assent to it.

Netanyahu’s demand is either racist or fundamentalist and is objectionable from an American point of view on human rights grounds either way (and I’m not just talking about the human rights of Palestinian-Israelis).

More ominously, the demand has to be seen in the context of his partnership with extreme nationalist Avigdor Lieberman. Lieberman wants to strip Palestinian-Israelis of their citizenship and make them stateless. Making people stateless was a policy of the vicious states of Europe in the 1930s, a policy from which Jews suffered mightily along with some other populations, and it is shameful for Jews to make or keep human beings stateless. You have a sinking feeling that the real reason Netanyahu wants Palestinians to assent to the Jewishness of the Israeli state (whatever that might mean) is that he has malicious plans for the 20% of the population that is not Jewish.

In any case, Sec. Kerry should simply slap Netanyahu down over this new demand, which is illogical and unreasonable and above all sinister. if Netanyahu won’t accept a two-state solution, then he or his children or grandchildren will likely have to accept a one-state solution. Kerry is trying to do him a favor, and if someone doesn’t want your favor, you don’t humiliate yourself to deliver it.