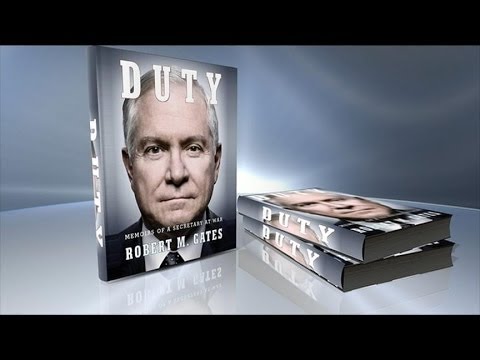 Former Secretary of Defense Robert Gates in his new memoir is said to have slammed Vice President Joe Biden for having been consistently “wrong” on foreign policy matters over the past four decades.

Gates’s petty gossip about his former colleagues should put an end to the pusillanimous Democratic Party tradition of appointing Republicans as secretaries of defense in Democratic administrations.

There is a lot to like about Gates. He over time became something like a defensive realist. He appears to have helped prevent Dick Cheney and the Neocons from attacking Iran. He warns against the seductive character of drone warfare, and wants a court to sign off on drone strikes. He said he thought any military commander who wanted to take US troops into another big ground war should have his head examined. He is scathing on the grandstanding and sadism of congressmen during hearings.

But lest it be forgotten, Gates’s career has been checkered and he has been consistently wrong about foreign policy himself. To wit:

1. Gates as a high official at the CIA was involved in the 1970s and 1980s in vastly exaggerating the economic and military power of the Soviet Union, scaring the American public with a supposed threat that was actually far smaller and less formidable than officials such as Gates alleged. Gates made a career out of politicizing intelligence. Inside the CIA, analysts who tell their bosses what they want to hear are called weasels. Gates was the weaseliest. One of the main reasons the CIA failed to predict the fall of the Soviet Union in 1991 was precisely the exaggerations and politicization pushed by Gates.

2. Iran was on the US terrorism watchlist at the time the Reagan administration was making the sales, so you couldn’t have done anything more illegal or hypocritical.

3. Not only did the Reagan administration in which Gates served as a loyal capo illegally steal weaponry from Pentagon warehouses (they had no Congressional authorization to sell them, so it was all black money) and sell them to Iran, they inflated the price and used the extra money to support the right wing Nicaraguan death squads known as Contras. Gates went back and forth in his later testimony about how much he knew and when he knew of the diversion of funds from the (already illegal) sales of arms to Iran by Col. Oliver North. The Iran-Contra Commission report decided that he had to have known all about it. Congress had passed the Boland amendment forbidding Reagan from sending tax dollars to the Contras. Reagan contravened that Congressional legislation by misappropriating tax-payers’ money (spent on the weaponry sold to Iran), which is unconstitutional. Gates helped him. Among the activities of the nice Contras was killing leftwing nuns.

4. Gates was, further, involved in further covert provision of weaponry, including chemicals and biological precursors to Saddam Hussein of Iraq. Iraq in the 1980s used chemical weapons against Iran at the front and then against innocent Kurds at Halabja in 1988. The Reagan administration blocked Iranian attempts to take a complaint against Iraq to the UN Security Council.

5. Gates was among the architects of the US policy of giving billions to far right Muslim jihadis (Mujahideen) such as Gulbadin Hikmatyar in northern Pakistan to fight, first the left wing Afghan government in 1979 and then the Soviet Union. The current Afghanistan War that Gates accuses President Obama of being lukewarm about is a direct consequence of the Reagan administration’s decision to fund a private army of jihadis against secular, pro-worker forces.

6. The Afghanistan jihad waged by Gates and others at the CIA involved pressuring Saudi intelligence also to raise funds for it. The Saudis asked Osama Bin Laden to help as a fundraiser. He went to Peshawar and founded the Office of Services with Abdullah Azzam, and came back to Saudi mosques to fundraise. The Office of Services eventually became al-Qaeda. Gates was therefore an accessory to the rise of al-Qaeda, an organization that might never have existed if it had not been for CIA covert operations against leftists in the Middle East, operations in which far right wing fundamentalists were cultivated as allies. The CIA established training institutes for the Afghan jihadis, who passed on the techniques they learned (cell formation, planning covert ops, weapons and explosives use) to their Arab colleagues in what became al-Qaeda. Gates’s CIA helped to create the “terror” that they later dragooned us all into a war against.

7. Gates and others in the Reagan administration appear to have downplayed Pakistan’s nuclear program, in part because they wanted Gen. Zia ul-Haq’s help against the Soviets in Afghanistan. Oooops.

8. Gates thinks that the 2007 Bush troop escalation or “surge” was effective. In fact, the US troops disarmed the Sunni Arabs in Baghdad, leaving them open to being ethnically cleansed from mixed neighborhoods by Shiite militias. After a while there weren’t so many mixed neighborhoods.

9. Gates was confident in 2008 that a troop escalation in Afghanistan could allow for free and fair elections and actually said that the Taliban held no territory and the security problems in that country were exaggerated.

10. Gates asserts that he believes that once the US winds down its military role in Afghanistan, that country will be on a fairly good track to success. In fact, Obama’s skepticism about whether the Petraeus counter-insurgency plan could succeed has been entirely borne out by events. As for Gates’s criticism of Obama for not trusting Afghanistan president Hamid Karzai, surely he jests. Karzai is a wild card.

It is incredible that someone with this astonishing record of reckless policies, some of which were later implicated in the 9/11 attacks and the resulting wars, should be so highly regarded as a policy-maker. He clearly has had second thoughts about many of those policies and has often been a voice of reason in his old age. But his lifetime record is not one that gives him a platform to attack Joe Biden.