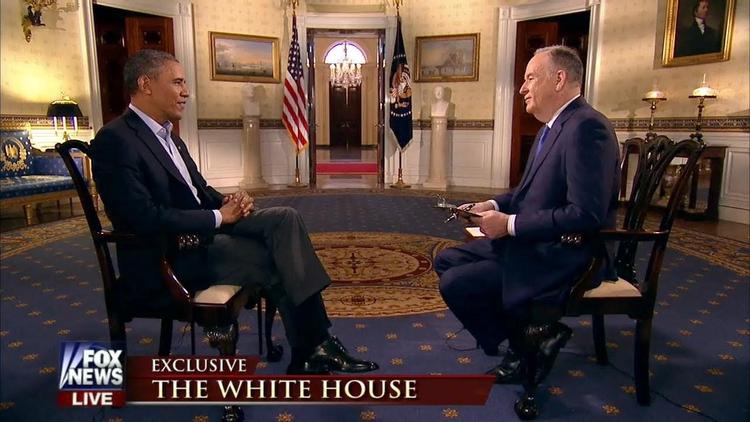 President Obama subjected himself to an interview by Bill O’Reilly of Fox “News” on Sunday before the Superbowl. Obviously, intellectually it was Obama Seahawks rolling over O’Reilly Broncos. And maybe it felt good to tell Fox News off for its serial propaganda against the administration. But I just regret that he lent either of these any credibility by a presidential appearance.

Fox News is a far right wing media conspiracy hatched by corrupt billionaire and press lord Rupert Murdoch (many of whose employees in the UK have been guilty of hacking into people’s phone messages for purposes of political blackmail) and by GOP poobah Roger Ailes to shift public opinion to the far right in the United States. How Barrett Brown faces 105 years in prison for a hyperlink but criminal Murdoch and his corrupt employees mostly go free is beyond me. Murdoch tried to blackmail former British PM John Major into supporting his policies, threatening him with bad press otherwise. Fox’s major anchors are caught over and over again in outright falsehoods. Peddling a falsehood after it is exposed as such is called “lying.”

Before Ronald Reagan gutted the Fairness Doctrine, Fox would not have been allowed to operate in this shameful way, pretending to be a news channel but actually serving as the Republican Party campaign headquarters.

It is the closest thing we have in the real world to the fictional media of Orwell’s “1984.”

(Because it is a huge operation, including many local channels, there are in fact good and professional journalists working for it who do real newsgathering; they just serve as window dressing for the actual purpose of the organization, which is the propaganda pushed during the prime time magazine shows).

Fox has repeatedly been caught deceptively editing video, including from Obama himself, so as to make it say something it doesn’t.

Do less than half Americans know that climate disruption is being caused by human beings putting 32 billion metric tons of carbon dioxide into the atmosphere every year? Fox “news” bears a lot of the blame for this. Deliberately onfusing the public about something that requires urgent policy-making or it will kill their grandchildren is just plain evil.

Fox cheapens our lives by reducing respect for human rights. It pushes homophobia, the restriction of women’s choice, Islamophobia, xenophobia (irrational fear of “foreigners”) and white and Christian triumphalism. It is hypocritical, in that it slams Muslims and Arabs while being 6% owned by Saudi billionaire al-Walid Bin Talal.

Fox has conducted a serial propaganda campaign against Obama since the day he was sworn in. It has pushed phony stories, invented scandals where none existed, and allowed guests to compare Obama to Dick Nixon and speak of impeachment. None of the so-called scandals they have pushed have any substance, or are even easy to comprehend, much less gaining traction with the public.

But predictably, O’Reilly’s interview questions were all drawn from this fantasy parade of imaginary “scandals,” many of them flogged by Rep. Darrell Issa (R-CA), the nicest sociopath on the Hill. Basically, Obama allowed O’Reilly to put him on trial, with a series of 5 serious charges laid out against him, against which he was supposed to defend himself.

George Lakoff has been warning for years that liberals are letting conservatives frame the issues and dominate the public debate. Obama just did it again. Although he defended himself admirably from the trumped up charges, nevertheless, the interview consisted of broadcasting those charges to millions of people– an enormous audience. Why give Fox that boon? Why give it to a serial killer of the truth like O’Reilly?

It is because liberals believe that good public policy comes out of vigorous debate. But there is a difference between debating someone in good faith and indicting someone with false and libelous charges. Conservatives can always spike the debate by subverting it toward propaganda by basic dishonesty. That tactic should be punished, not rewarded. Obama rewarded it.